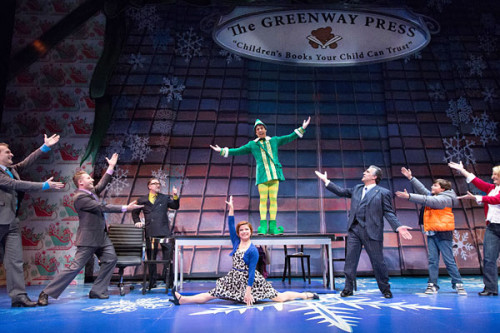 My fellow readers, the holiday season has officially started and among all of the theatrical attractions to choose from, the musical Elf is fast becoming an alternative to the standard production of A Christmas Carol and other traditional holiday fare at many regional theatres. As a matter of fact there are two tours out right now of Elf. One just played the Lyric Opera House in Baltimore and a separate company will soon be at the Kennedy Center’s Opera House.

… a treat for all

Philadelphia’s Walnut Street Theatre is known for doing large scale musicals in its holiday slot. The King and I and The Music Man are just a few of the titles that have been presented for the holidays. Those two shows are classics of the American musical genre, but Elf, while being a holiday show, is unique in the sense that it doesn’t follow the traditional style for its score. There are plenty of holiday type songs but they all have a big band jazz feel to them, making Elf the swingingest, hippest show for the holidays that you will find. 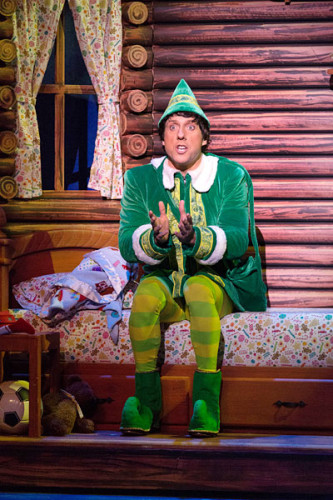 Based on the hit movie of the same name that starred Will Ferrell as its central character, Thomas Meehan and Bob Martin’s book follows the story of Buddy the Elf (Christopher Sutton), an over peppy and enthusiastic chap when it comes to the holiday season. After not being wanted by his mother, Buddy crawls into Santa’s toy bag one Christmas Eve and ends up back at the North Pole, where he is adopted and made into one of Santa’s elves. When Buddy finds out he is a human, he is sent back to NYC to find his Dad, Walter Hobbs (Charles Pistone), who runs a big children’s book company and is having a rough go of it after the last book put out by the company was missing the last two pages, sending kids all over the world into meltdown mode. When Buddy shows up at the office, Walter’s receptionist, Deb (Cary Michelle Miller), takes a liking to him, even as Walter has Buddy thrown out by the cops. He ends up at Macy’s where he gets a job at where else, the North Pole (Macy’s version). Now keep in mind that Buddy has been wearing his elf suit since he hit NY, so you can imagine the stares he gets when he shows up for his job. He meets Jovie (Kate Fahrner), a young lady with no Christmas spirit and unlucky in love. Buddy falls head over elf shoe for her and, while it takes Jovie a little time to warm up to the idea of  dating again, she does agree to go with Buddy on a date. Meanwhile Michael (Tyler Hentz at my performance), the son of Walter Hobbs, is sick and tired of not seeing his workaholic father and his mom, Emily (Kristine Fraelich), feels the same way. When Walter finds out that Buddy is his son after his wife orders a secret DNA test, the plot thickens as Buddy tries to fit in at his Dad’s office in a new Brooks Brothers suit. I’m not saying anything else about the story but let’s just say the outcome of all of this will leave you with a “sparklejollytwinklejingley” feeling in your heart.

Performance wise, this production is bursting with talent. Christopher Sutton’s performance as Buddy the Elf will make you want to let him give you a big hug but make sure he asks first as he tends to hug first and ask after. Sutton puts over songs like “World’s Greatest Dad” with all of the energy the character needs without making him one of those over peppy guys you just want to smack. There is nothing to make Buddy obnoxious in Sutton’s performance.

As Jovie, Kate Fahrner matches Sutton in star power. Her big belt number called “Never Fall in Love” is a definite highlight and her acting is equally as strong. After seeing Fahrner in WST’s production of Grease, I am thrilled to have had the chance to see her perform again in this show. Her presence is certainly felt whenever she hits the stage.

Other performance highlights include Charles Pistone’s gruff portrayal of the intense businessman Walter Hobbs and Kristine Fraelich as his frustrated wife Emily. I’d be remiss if Cary Michelle Miller was not mentioned for her spunky portrayal of Deb the receptionist and Tyler Hentz as the son who just wants a day with his dad for Christmas. Hentz is a young performer who at this rate will be getting lots of work as he gets older. Last but not least, there is Bill Van Horn as the jaded Santa. Let’s face it things have changed a lot for Santa. The reindeer don’t pull the sleigh anymore, so it is now powered by Christmas cheer, which is getting harder and harder to find. He keeps his naughty and nice list on his tablet and has to see his in-laws on Christmas after working all night. Now you understand why Santa is jaded and Van Horn is hysterical in the role. He even managed to sneak in a football score of the Philadelphia Eagles game. 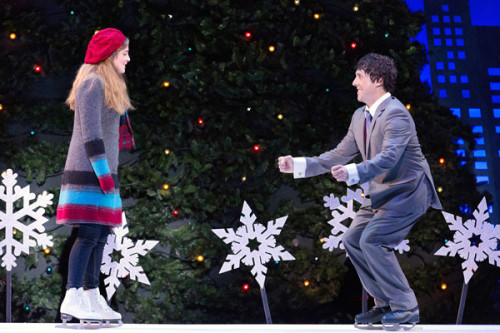 The ensemble sings and dances their hearts out. One standout number takes place in a Chinese restaurant where all Santas go on Christmas Eve after finishing work. The song is called “Nobody Cares about Santa” and deals with things like how kids are now texting while sitting on Santa’s lap. It is funny and poignant at the same time.

The score by Matthew Sklar (music) and Chad Beguelin (lyrics) as I mentioned earlier has a big band jazz feel to it, which makes the score all the more infectious. Songs like “Happy All the Time” and “The Story of Buddy the Elf” are just two examples of the hummable score. The team’s modern take on a carol type of song called “A Christmas Song” is one I’m sure choruses across the country will be adding to their holiday concert repertoire soon.

It also helps when the score is played by a good orchestra and the eleven piece ensemble under the direction of music and vocal director Douglas G. Lutz does total justice to Sklar and Beguelin’s score and Doug Besterman’s swinging orchestrations.

Director and choreographer Marc Robin has staged the show with tons and tons of energy while letting the story make its points about holiday cheer and how you should make time for the people in your life.

Many holiday musicals come off as cheesy, but Elf is not one of those shows. It features a hip score and in this case a high end cast and production. Philadelphia is not that far from us down here in the MD area so I suggest you plan a nice day trip with your family and see Elf at America’s oldest theatre. It’s a treat for all and Walnut Street Theatre presents it first class all the way.

Running Time: Two Hours and 25 minutes with one intermission.

Elf plays through January 5th 2013 at the Walnut Street Theatre which is located at 825 Walnut Street, Philadelphia, PA 19107. Tickets can be purchased in person at the box office, by calling 215-574-3550 or by clicking here.