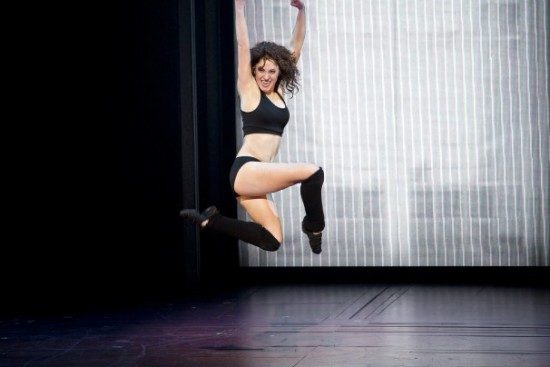 There is always a danger of taking a movie that so many people love and turning it into a stage musical. Usually the new songs never match what was in the film and the result is never as good. Flashdance-The Musical now playing at Kennedy Center’s Eisenhower Theater is a case of taking what was already iconic for a lot of people, but rethinking it so it’s not just the movie thrown up onstage. The result is something really good. It keeps all the big numbers that you remember from the film, such as “Manhunt,” “Maniac,” and of course the mega hit “What a Feeling.” The songs from the film are infused with a few 80s classics (oxymoron) such as “I Love Rock ‘N’ Roll” and “Gloria.” If that weren’t enough for your teased to the hilt hair, it then adds additional songs written expressly for the stage that are truly theatrical in content and sound making the score totally cohesive with nothing sounding out of place. Add to this a knockout group of performers and leg warmer busting choreography and direction by Tony Award winner Sergio Trujillo, and here is a musical that should not be dismissed as a cheesy movie knock off.

The story is set in Pittsburgh, PA, and there we meet Alex Owens (Jillian Mueller). Her real passion is dance but for now she works the mill days to make ends meet while at night performs at a dive of a club run by Harry (Matthew Henerson). When Nick Hurley (Corey Mach), who is the grandson of the founder of the steel mill, becomes a supervisor things start to heat up. He has to constitute job cuts and even though he doesn’t want to his board is insistent. Andy (Austin Owen) is the recipient of a job cut. He is married with kids and will even take part time if necessary to keep some money coming in. This does not go over with Alex, and Nick ends up doing something unprecedented for an executive (not telling). Then there is the part of the story that concentrates on Alex’s passion for dance. With the encouragement of her childhood dance teacher Hannah (Jo Ann Cunningham), who is now frail physically but definitely not mentally, and a nurse Louise (Doreen Montalvo), Alex goes for an audition at Shipley Academy, an exclusive dance school. Then there is also another plot about Harry being in competition with C.C. (Christian Whelan) who is a club owner whom we come to find out has been using under age dancers  and supplying others with drugs. One of these girls is Gloria (Ginna Claire Mason), who is seduced by C.C., to go and work for him. The result as you might imagine is not good.

Yes, that is a lot to cram into an evening, but Tom Hedley and Robert Cary’s book works very well and doesn’t feel long in any way. The only issue for some might be the anything is possible message being repeated over and over again. I get that this is a story of follow your dream and never give up, but if you hammer your message too hard it might come off as being a little too preachy. 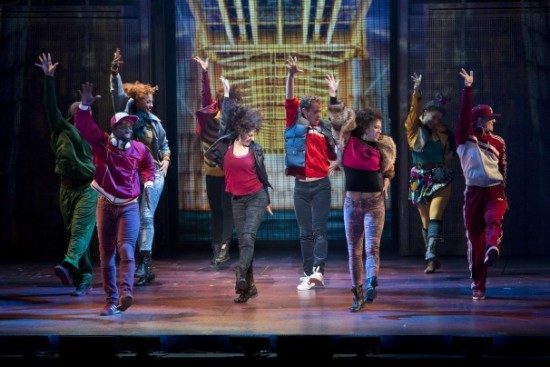 The ensemble of ‘Flashdance.’ Photo by Jeremy Daniel.

The score by Robbie Roth (music and lyrics) and Robert Cary (lyrics) is very theatrical while keeping that 80s feel. There is the knockout opening song called “Steeltown Sky,” as well as a song called “Chameleon Girls,” which captures the sleaze of C.C.’s nighclub.  There is also an eleven o’clock song for Alex which I’ll discuss in detail a little later called “Let Go.” The new songs mesh with the existing material from the film very nicely, and it doesn’t feel like anything is shoehorned in which is what happens sometimes with this kind of a show.

This show depends on a good band to make it fly musically, and this show is travelling with a seven piece wall of sound. If I don’t mention them by name I’ll never forgive myself, so they are Nick Williams (Conductor/Keyboard 1), Michael Borth (Associate conductor/Keyboard 2), Philip Coiro (Drums), Matt Brown and Freddy Hall (Guitars), Mike Preen (Bass) and Brian Krock (Tenor/Alto/Soprano saxes/Flute/Clarinet).

Doug Besterman’s orchestrations keep all of that cheesy 80s synthesization, but it is absolutely appropriate for the score and in this case feels remarkably theatrical as does Jim Abbott’s dance arrangements. When you hire the right people for the job, this is the result.

Performance-wise, I must start with Jillian Mueller as Alex. Here is a young performer who has that “WOW” factor and is a triple threat. She can act, dance, and sing like nobody’s business. Her eleven o’clock song called “Let Go” is easily one of the best performances I’ve heard all year and, if the show goes to NY like the producers want, Mueller will become a star with her turn in this production.

Corey Mach’s portrayal of Nick is another standout. His act two feature called “Enough” brings out all of the frustration his character is having with his board of directors and ultimately proves that just because he is an executive of privilege doesn’t mean you can’t be human. 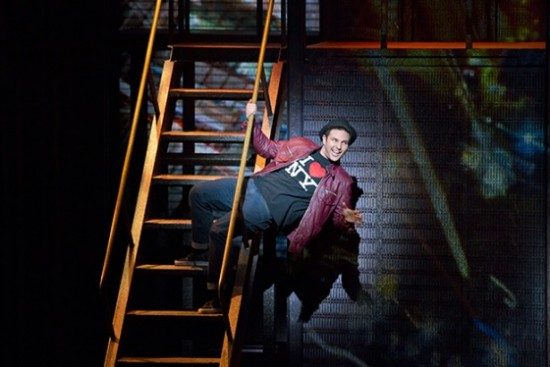 Dequina Moore as the brash Kiki hits hard with her feature “Manhunt” while Alison Ewing as Tess performs one of the hardest numbers dance-wise in the show, called “I Love Rock ‘N’ Roll,” with tireless energy. You can’t help but feel sorry for Ginna Claire Mason as Gloria because she is taken advantage of by C.C. while just trying to make a living. Matthew Henerson and Christian Whelan as the club owners are the perfect examples of good and evil, while David R. Gordon as Harry’s nephew Jimmy grows from being a bad comedian to someone who wants to become a responsible person and help Gloria. Last but not least, a quick shout out to Lawrence E. Street as Joe, the foreman, for making a welcome return to the stage.

The ensemble’s energy just bounds off the stage with Ryan Carlson getting a neat break dance feature.

Director/Choreographer Sergio Trujillo has gotten every ounce of energy from his cast and while the pacing is brisk it never feels as if Trujillo forgot about the story so there is time to breathe between songs and feel for these characters. His choreography ranges from 80s dance to classical ballet. This is quite a range wouldn’t you say?

Klara Zieglerova’s sets paired with Peter Nigrini’s projections move us seamlessly from one locale to another, while Paul Tazwell’s costumes features those legwarmers that believe it or not were fashionable in the 80s. Howell Binkley’s lighting pops throughout while Charles LaPointe’s wig and hair design begs the question “What were we thinking back then?”

I also should add that this show has been on the road for almost exactly one year now having opened on January first 2013 in appropriately enough Pittsburgh’s Heinz Hall. Some tours look tired after being out for awhile but this one does not so kudos to all that are keeping the show fresh throughout the country.

Flashdance- The Musical is one of those shows that doesn’t fit the mold of a movie turned stage musical. Nothing feels like it was shoehorned in and the show looks as if it was conceived for the stage. With a great score, standout performances and choreography that you can’t forget, this show gets my full endorsement. What a Feeling!!!

Running Time:Two Hours and 30 minutes with one intermission.