Theatre Review: ‘Just the Two of Each of Us’ by The Pajama Men at Woolly Mammoth 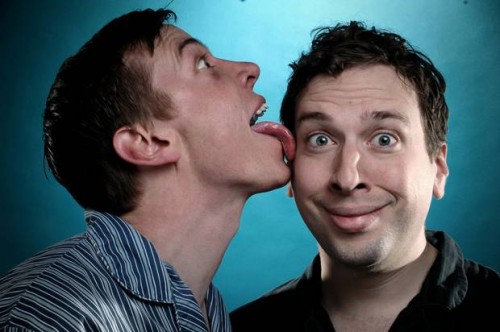 If you and your friends and family are in the mood for a fun, witty, and utterly meaningless*** evening of performance this holiday season, then Woolly Mammoth’s presentation of The Pajama Men’s Just the Two of Each of Us is for you.

You and your loved ones will love it.

You will have noticed that I italicized meaningless, but then put an asterisk by it to signify that the show was meaningless “only if ‘meaningless’ does not include the importance of have a good time.”  And then another asterisk to represent the fact that “meaninglessness never tasted so good,” and then another concluding asterisk to ask: “when did meaningfulness become such a big deal anyway?” 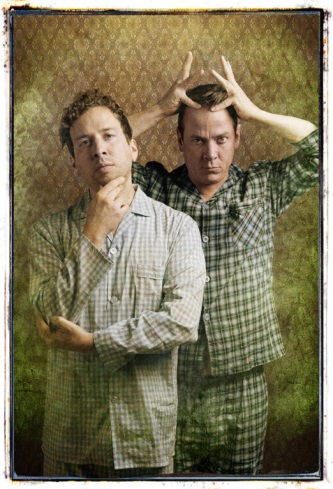 Not really, but they do have the chops for it; so they substitute a huge-headed monster that eats people and cities, and a king and his magician fool that live for 700 years, and two inspectors of sink holes who discover the king’s crown, and a couple of girlfriends who do nothing but fight and make up, and two lovely horses who have the most tragic of death scenes, and hundreds of citizens fleeing the terror with their funny little legs, and…

And these Pajama Men, who of course wear nothing but pajamas and socks, portray these more than enough characters to keep any audience member from getting bored, while at the same time creating a kaleidoscope of suspenseful, vivid imagery, using nothing but their twisting, contorting bodies and runaway fingers and shaking torsos and bugged out eyes, and endlessly modulating vocal instruments.

And, to be honest, there is also a musician, Kevin Hume, who underscores the humor as well as the action with guitar riffs as wonderful as what is being riffed.

But you should not ask me to remember exactly what happens in their 70-minute romp through magic and fun, because then I would have to plead not really caring about details or actual storylines, though there was a storyline, of sorts, a zany one of course, one with a beginning, a middle, and an ending, and maybe even another middle.

But as I said: who cares.

What really makes this an evening of Woolly fun is the charm the two performers bring to their hipster stage.  Allen and Chavez have clearly been working together / playing together / hanging out together for a long time, sharing banter and witticisms and the total delight in making fools of each other, without ever once feeling like a fool.

You and your loved ones will love it.

Just the Two of Each of Us by The Pajama Men plays at Woolly Mammoth, on D Street downtown between 6th and 7th.  For tickets and more information click here or call 202-393-3939.