Theatre Review: ‘Man in a Case’ at Shakespeare Theatre Company 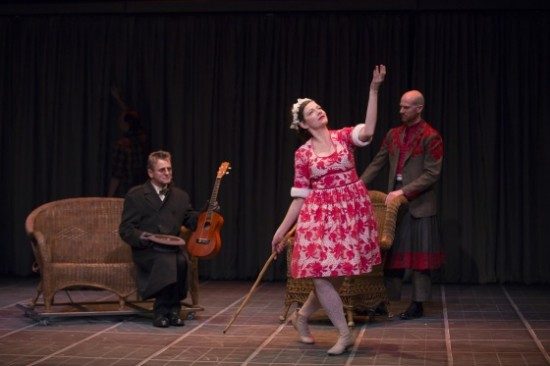 Shakespeare Theatre has again welcomed into its home an ensemble of renowned master artists: Anton Chekhov, Mikhail Baryshnikov, and the combined talents of the Big Dance Theater company. And Washington audiences are again treated to the delights of vanguard artists at work.  Man in a Case, a multi-media avant garde production based on two short stories by Anton Chekhov, blends story, dance, projections, music, sound design, and a kind of rural Russian radio-documentary/direct address that charms as well as informs.

All together Man in a Case fits squarely within a continuum of artistic experimentation that Chekhov, the old master, also once embodied at a time when the dignified portrayal of common folk still upset the aristocratic narratives of the day.  And it is this polished showcase of experimentation at one the nation’s leading classical theatres that further distinguishes this production. 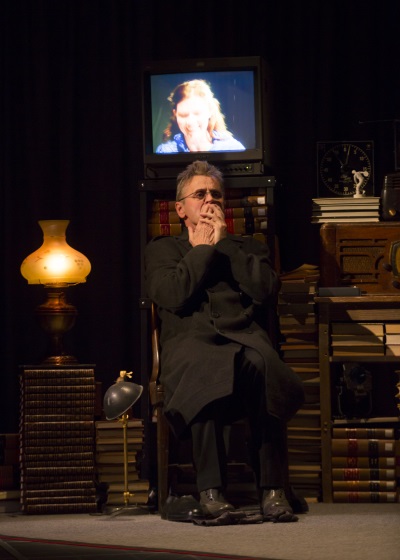 Mikhail Baryshnikov in ‘Man in a Case.’ Photo by T. Charles Erickson.

Lovers of conceptual dance, for whom the moving of form through space in a surround of sound resonates, will relish the precision and intentionality of each element of this layered performance.  It is a visual and auditory experience—as theatre is of course—but Man in a Case brings a mindfulness of interdisciplinary composition to high ground.

The design elements encompass this minuteness of observation.  Video Designer Jeff Larson’s haunting projections—moving and static, pre-shot and spontaneous—present a variety of perspectives of focal characters.  Snapshots are taken and writ large upon the backdrop, snippets of text chart the narrative, and, in an eloquent study in movement, Baryishnakov dons his character’s long coat while prone upon the stage.  His graceful transition are captured from above and projected on the protean screen behind.  This innovative prone/projection technique is repeated within the second story as Baryshnikov and actress Tymberly Canale tenderly enact a sequence of tableaux that encapsulate love sought and lost.

Narrated with verve and contemporatized humor by Jess Barbagallo and Chris Giarmo, who portray the two story-telling hunters of Chekhov’s original work, the production features two Chekhovian tales. The first story tells of Belikov, a repressed teacher of Greek in a remote Russian town whose obsession with order has permeated the psyches and daily practice of all around him. His colleagues fear him and, to their dismay, find themselves bending over backwards to accommodate his obsession with order.  Played with subtlety and grace by Baryshnikov, we see this prim and heartbreakingly lonely man exact his rituals of mundanity in his tiny, container-like, one-room apartment. He is indeed a “man in a case.”  Belikov locks and unlocks his tower of locks, he places his right glove and left in their separate cases, removes his ever-present galoshes, reclines stiffly in his Murphy-bed, and draws down its shade, encased, as it is, for the night’s slumber.

Into Belikov’s world of repetition comes Barbara, the sister of a new teacher colleague, a spirited, beautiful young woman charmingly played by Tymberly Canale.  She laughs and flirts and dances, and for a moment Belikov is smitten; he beams and considers marriage.  His colleagues collectively hold their breath; but, in an antiquated rendition of social shaming brilliantly reminiscent of the cruelties of today’s social media, someone circulates a vulgar cartoon of his infatuation.  Belikov is humiliated beyond endurance, and he retreats in tragedy.

Throughout, there is a choreography of shared gesture, subtle and repetitious, that echoed the repetitions of Belikov’s life, a visual representation of the sameness of everyday life for which Chekhov is the unparalleled master. The company—accomplished dancers all—includes Aaron Mattocks who plays Barbara’s brother Kovalenko with a strong and surly grace, and Barbagallo and Giarmo delightfully double as fellow teachers.  Tie Blow and Keith Skretch (sound designer and associate video designer, respectively) round out the village’s townspeople.

Interestingly, the way this story examined repetition, as the organizing principle of a life, brought to mind the current Van Gogh exhibition at DC’s Phillips Collection—entitled “Repetitions”—which brings together dozens of the master painter’s explorations of the place and form and personages of daily life.  Indeed, one envisions Belikov’s Spartan room as a dark, bookish Russian variation on Van Gogh’s iconic bedroom at Arles. 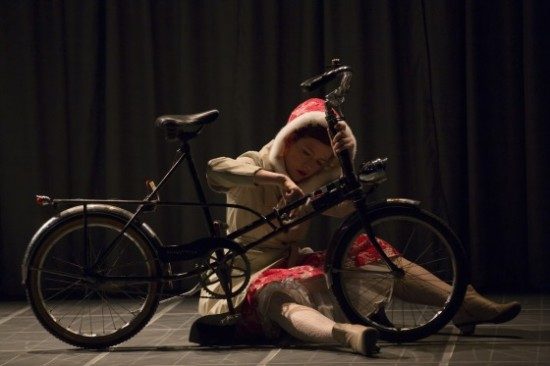 Tymberly Canale in Man in a Case. Photo by T. Charles Erickson.

The other story, “About Love,” tells of a man—also delicately played by Baryshnikov—who falls in love with a married woman, the wife of a close friend, again played by the coquettish Canale.  Their romance, however, is doomed when she chooses husband and family over lover, and they part ways.

Skillfully adapted from Chekhov’s stories by Annie-B Parson and Paul Lazar of Big Dance Theatre and ably directed by them as well, Man in a Case is choreographed by Annie-B Parson with understated grace and delicacy. There is a melancholy crispness to the production that is utterly Chekhovian.
The other design elements laced the production into an integrated whole.  Costume Designer Oana Botez gives us elegant garments that wrap each character in the iconography of his or her role.  Lighting Designer Jennifer Tipton fills the stage with suggestive  light and shadow. And Sound Designer Tei Blow gives us a soundscape of amplified narrative and acoustics of place.
While the production does not include the full-throttle dance for which Baryshnikov is renowned, for theatregoers eager for new theatrical forms, Man in a Case offers a tightly choreographed synthesis of 19th century literary sensibilities with 21st century artistic forms.  What results is a kind of interdisciplinary mindfulness, a quiet excellence of form and content, led by master artist Mikhail Baryshnikov and a company of accomplished and versatile fellow artists.
Running Time: Approximately 95 minutes without intermission.
Advisory: A few words of profanity.
Man in a Case plays at Shakespeare Theatre’s , 450 7th St., NW, WDC, through December 22, 2013.  For information/Tickets: 202-547-1122 or here.