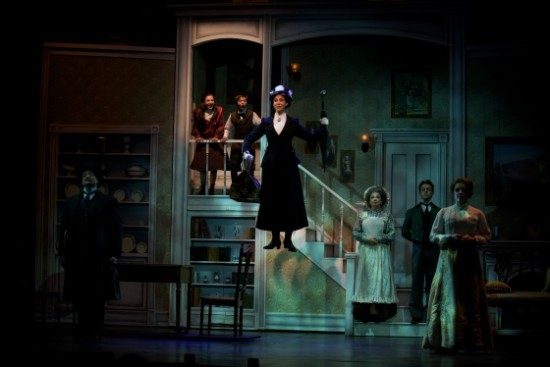 In November of 2006 the beloved Disney movie musical Mary Poppins flew into Broadway’s New Amsterdam Theatre where it ran for over 2,600 performances. While keeping most of the iconic songs from the movie by the Sherman Brothers, the stage musical went back to the original source material written by P.L. Travers and had additional songs written by George Stiles and Anthony Drewe who also embellished the Sherman Brothers songs when needed. The result was a darker telling of the material. Since Broadway the show has had some of the darkness removed and has been trimmed by about ten minutes making it more palpable for children.

That version is now the one regional theatres can license for production, and Lancaster Pennsylvania’s historic Fulton Theatre can now be added to the list of regional theatres presenting this musical favorite.

The familiar story of the nanny who receives a letter in the wind from two children goes something like this.  A banker, Mr. George Banks (Curt Dale Clark), and his wife, Winifred (Abby Mueller), have been looking for the proper nanny for their two “inquisitive” children, Jane and Michael (Lauren Elledge and Austin Nedrow).  After several nannies have left because of the shear stress bought on by the children, the kids write an ad themselves. Mr. Banks tears it up and tosses it up the chimney.  Somehow our heroine, Mary Poppins (Katie Sina), receives it and, as if by magic, makes an entrance by flight into the Banks home. 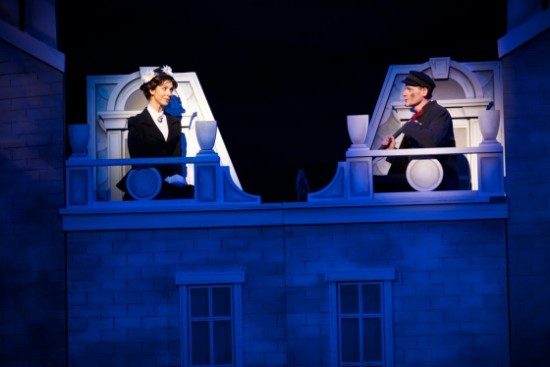 Her method of nannying is a little different than the rigid version that Mr. Banks would like, as we see when Poppins takes the children to the park to meet a street painter named Bert (Brian Shepard).  At one point Poppins leaves forcing the Banks to hire back George’s old childhood nanny, Mrs. Andrew (Q. Smith), who is known in the nanny field as the “holy terror.” Eventually, Poppins returns and things get back to where they should be. Mr. Banks admits he was wrong about Poppins’ method and, in the process, he decides to become the father he should have been all along to his kids.

Performance wise, there is a lot of talent to talk about.

Katie Sina as Mary Poppins embodies the character. Her singing, acting, and mannerisms are spot on. Her vocal highlights include “Feed the Birds” and “Practically Perfect.”

Likewise, Brian Shepard is the street painter/chimney sweep Bert. While not as physical as some might like, his singing on “Chim Chim Cher-ee” and his duet with Sina, “Jolly Holiday,” are two of the highlights of the production and Shepard is very likable character wise.

As Mrs. Brill, the housekeeper, the woman who has to train all of the nannies, Susan Cella is hysterical. Her comic timing will leave you rolling.

The parents, Winifred and George, are played by AbbyMueller and Curt Dale Clark; each gives a fine performance with Clark being the sterner of the two parents, while Mueller is more understanding.

Last but not least, I want to mention Lauren Elledge and Austin Nedrow who play the Banks children. It’s always nice to see where the next generation of performer will come from and these two young performers are very talented in both singing and acting.

The ensemble also has lots of energy and plays multiple roles throughout. 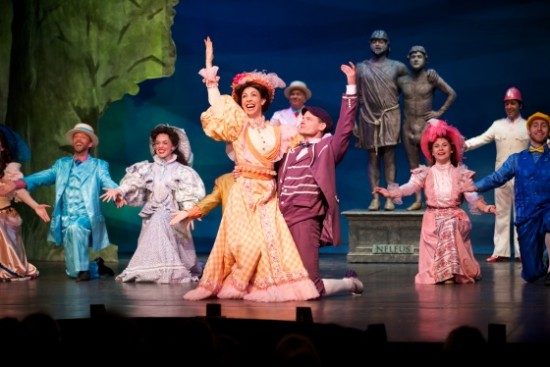 The cast of ‘Mary Poppins.’ Photo by J. Urdaneta Photography.

There are certain things one comes to expect with this kind of a show. Keeping in mind that all theatres don’t have the same budget as Disney does, I still was a bit surprised at Charles S. Kading’s sets.  They consist mostly of drops, except for the main Banks house unit and the rooftop locations. The stage at the Fulton looks like it can handle more than what this show uses, so I wanted a little more of an imaginative scenic concept. The costumes are a rental package from Maine State Music Theatre and are coordinated for this production by Anthony Lascoskie Jr.  Brian Hapcic’s lighting provides a couple of neat effects and adds some pop to the show’s big musical moments.

I usually enjoy Marc Robin’s dance work, so I was a little surprised at his simplistic choreographic take on “Supercalafragilisticexpialidocious,” which consists only of very basic hand movements. He does, however, give us an exuberant dance number in act two with the chimney sweep specialty number called “Step in Time.” Robin’s direction keeps the show moving along and keeps it fun throughout.

All in all you have to take this production of Mary Poppins on its own terms. It has some great performances, but is lacking some of that extra magic you might want. Regardless, this is a “jolly” holiday attraction your whole family can enjoy, and watching it in a historic theatre like the Fulton adds to the experience.

Running Time: Two Hours and 25 minutes with one intermission.

Advisory: One or two sections might scare really small kids.

Mary Poppins plays through December 29th 2013 at The Fulton Theatre. which is located at 12 North Prince Street in Lancaster PA. Tickets can be purchased by calling 717-397-7425 or by clicking here.