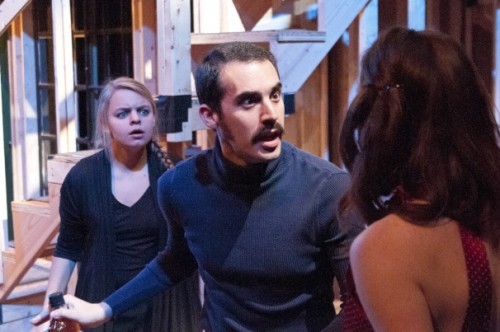 The quintessential theatre-lover’s play, Noises Off arrives at 1st Stage Theatre in Tysons as distinctly fun escapist fare for the holiday season. It is loaded with F’s…frantic, frolicking, and farcical. Also a humongous F-bomb from the exasperated director of this fictional third rate acting troupe, who at the final dress rehearsal yells “just say your F-ing line! We open in…in…its past midnight so we open tonight!”

So reflects the hopelessness of this cast of performers, saddled with a worn bedroom farce called Nothing On.  Playwright Michael Frayn’s comedy was launched on Broadway in 1983 to critical raves and even reprised in 1991, a short time period for a revival. It was touted by many as the most hilarious show ever put onstage. Yet, with an amazing script come large expectations and the need for top talent. Invoking the spirit of Yogi Berra, its not easy to do bad good. More on that later.

…many laugh out loud moments.

In this play within a play, we meet the actors putting the final touches on the show and see their foibles. In Frayn’s world, we realistically feel the nightmarish overtones of the production that is bad and gradually descends to hopelessness. A great show for actors as audience–reliving the unspoken horror of a show gone wrong—and seeing that it can happen to others.  Caught up in the froth is the separate playbill for Nothing On, replete with the fictional character’s bios. A nice touch. 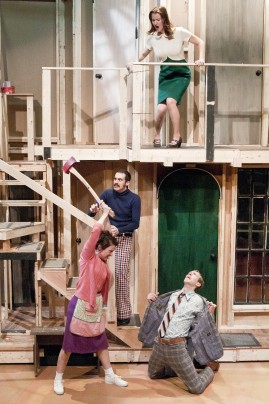 The flimsy plot involves Dotty the maid (Kathleen Akerley) fussing about all the people coming in and out and keeping track of her plate of sardines. A constant barrage of slamming doors, misplaced props, innuendo, and backstage relationships ensues.  The characters are all people we feel we know. There is Garry (Dylan Myers) who enters with the ditzy Brooke (Blair Powers). He is that guy who earnestly wants to say something, but finishes with “well, you know.” His energy and stage athleticism were key to the show. Brooke is that gal who just knows her cues and is one emotion all the time. Freddy (Zachery Fernebok ) is the actor who has to have everything explained to him, replete with various other quirks. He added more fine physical acting and nuance in a believable role. Selsdon (Mario Baldessari) is the forgetful, aging actor with a bit of trouble with the bottle. Polished as a performer, he was almost too smooth to be believable. A left handed compliment? Lloyd the Director (Matthew Pauli) captures the exasperation of plans gone wrong in a curt, snooty style, oftentimes in stunned silence.

The action goes from opening night for this not-ready-for-the-English-countryside troupe to a month into the show, where entanglements and feuds abound. Now the love triangles escalate into full scale war, with the cast struggling to say their lines and hit their marks while plotting their next move. Blazingly fast, its almost too much to take in at once. The fun perspective in Act II is the reversing of the set so that we see the action from a backstage view. The full set is built as a lazy susan, revolving for this perspective. This is how we capture the real ‘noises off” which refers to a stage direction of unseen sound offstage. Props off to Scenic Designer Steven Royal and staff for this achievement.

My favorite part was backstage in the ‘quiet’ area as the cast perform a series of synchronized maneuvers to keep an ax away from a jealous Garry and a bottle away from Selsdon.

Just when you think you’ve seen it all, Act III shows the troupe ‘onstage’ totally blowing up their last performance. And just as disaster seems to pop up at every turn, the actual cast had an actor’s nightmare of their own. A cast member came down with something and couldn’t go on. What to do? Director Doug Wilder filled in as the ingénue Belinda, beefy and bearded no less. While a game try, it affected the look and the timing enough to be noticeable. One hopes they get their full complement back for the remaining shows.

It takes a talented cast to work with such exactitude, not the type show that one cuts their teeth on. As Director, Wilder has shown a good grasp of English farcical sensibilities and brought out many laugh out loud moments. I wished it kept its full momentum at the end. Although it faded a bit, it is still a great night of theatre. Farce so well crafted is rare.

Advisory: Some mature dialogue and situations.