Theatre Review: ‘The Lyons’ at Round House Theatre, Bethesda 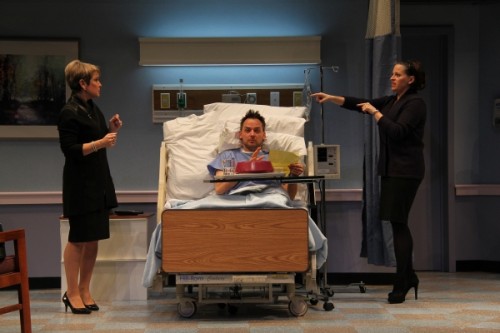 With Nicky Silver’s The Lyons we are presented a typical dysfunctional family.  We have the dying, cancer-filled, angry father who openly despises his homosexual son; the loveless, shallow, insensitive mother who cannot wait for her husband to die; the battered, alcoholic, divorced, single mom daughter who cannot escape her addictions or the belittlement by her family; the lonely, fantasy-ridden, stalker homosexual son who has zero gratitude for the mother who supports his 30-something self so he can write “short stories.”

Ironically, we are also presented with what appear to be four normal looking, healthy actors playing these roles and giving them personas that are endearing and lovable and totally unlike the despicably lost human beings they supposedly are.

Might such an odd combination be a director’s choice, in this case John Vreeke’s?  Might it be the playwright’s warped sense of the real?  Or should we just declare it the result of poor writing?  Or perhaps it’s just a colossal miscalculation? 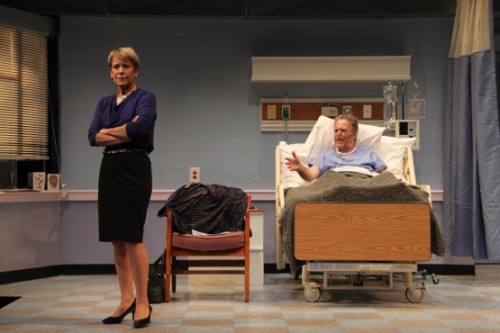 Might a production of Nicky Silver’s play, which bounces back and forth between the farcical and the painfully sad, succeed given the right combination of talent, vision, geological forces, and astrological signs?  I doubt it, but sometimes reputation trumps viability.  For me, this play  arrives dead on the boards.

The play’s greatest challenge is to create characters whom the audience can like even as those characters reek anger, contempt, and self-pity.  This production keeps the characters likable, but by sacrificing the authenticity of their excessive narcissism.

The central character is the son, Curtis, played sincerely by the good-looking Marcus Kyd. By all the evidence presented on the Round House Stage, his Curtis is likable and reasonable, generous and kind.  Yet, according to Silver, he is utterly incapable of forming a relationship of any kind with any other human being.  Instead, he creates elaborate fictional romances based on real people that he spies on from afar.  The next step would be to kidnap one of these real people and force him to act out the fictional identity at gun point.  Kyd’s Curtis, though well acted, failed the smell test for me: his psychological orientation seemed far too healthy for the attributes Silver’s gave him. 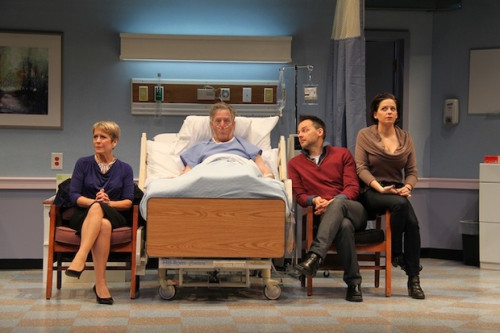 Naomi Jacobson tackles Rita, the insensitive matriarch of this dysfunctional Jewish family.  She drives act one with her obsession for redecorating, a long overdue activity she can now do, as she knows that her husband will die within the week.  Jacobson captures Rita’s superficiality as well as her carefully inserted moments of genuine emotional anguish.  Unfortunately, the former so overwhelms the latter as to make her loneliness inconsequential.

John Lescault plays the dying patriarch, Ben.  Ben is a one-note character for the most part: Lescault varies his angry bark frequently but it still tends to grate, as his anger exemplifies the play’s approach to anger in general.  In other words, the play’s anger is inexplicable.

Now, it has been suggested to me that New York, where the play takes place, bubbles with amorphous anger; and the times I’ve been in that great city I will admit to witnessing the hair triggers and the nasty temperaments.  New York’s anger, however, results from the “too many rats in a small cage” effect, and you can see the stress in the people’s deportment.  Not so, in the Round House production.

The final family member, the daughter Lisa, was played by Kimberly Gilbert.  Thankfully, Lisa is not an angry character: she is anger’s victim. Ms. Gilbert’s Lisa is the most believable of the characters on stage, as she combines the character’s seeming normalcy with her oh-so-addictive personality.  Her Alcoholic’s Anonymous speech at the beginning of act two was one of the most effective in the whole production.

To be sure, some will enjoy the production’s comic elements.  The sitcomesque situations and familiar memes make for some laughs, but for the most part The Lyons offers its audience little in the way of the new or interesting.

Now, if you want to go to the theatre and just cannot stomach one more Christmasey show, then The Lyons might just be the show for you.