For the press opening of The Apple Family Plays, a two-play repertory of Richard Nelson’s That Hopey Changey Thing and Sweet and Sad, Studio Theatre invited the audience to attend a dinner nestled within the 2+ hours between the shows.  The dinner, similar in form to the one shared by the Apple family in the two shows, was catered by DC Central Kitchen, a non-profit whose mission is to feed and train low-income Washington residents.

A remarkable 90% of those in attendance at the press opening took up Studio’s offer to forgo a restaurant outing at a local 14th Street restaurant, of which there are many fine ones, to spend that time with fellow theatre-goers.  For two hours, the crowded third floor of Studio bustled with conversation about food and theatre, the aesthetics and maybe even the politics of American culture. 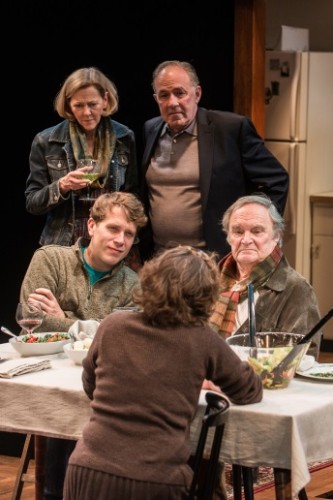 I can but applaud Studio’s decision to offer this moment of community building. Though perhaps only symbolic in nature, the event highlighted a too-ignored, under-appreciated, and slowly disappearing necessity of any healthy society: the communal gathering.

Like the Apple family, we seldom come together in our differences to break bread and express our bond to one another.  The pace and complexity of modern life, with its pursuit of individual advancement, tend to push our need for community into the background, encouraging us to believe that those shared moments are luxuries the “successful” can ill afford.

Yet, theatre at its root has always been one of society’s most powerful communal expressions.  A discourse on the common concerns of a people, theatre brings a community together to hear its concerns and to watch how those concerns manifest and affect people’s lives.

And that is why the current trend in theatre to avoid our larger, shared anxieties about the country’s health, our economic well-being, and our children’s future only diminishes theatre’s ability to reach a larger, less privileged audience. Thus, though clearly a vital component of Washington’s economy and a key player in her cultural scene, theatre struggles to produce plays around which our increasingly segmented society can gather and feast, like a family, as it were.

Even the Apple family represents but a sliver of the American people.  On the one hand, the Apple family siblings are the product of a single mom.  They and their friends are marvelously middle class, consisting of teachers and waiter-actors.  When the lawyer brother Richard leaves his government job to make big money in the corporate class, he gets no end of grief from his middle class siblings.  On the other hand, however, allusions are made to a wealthy benefactor who supported the fatherless family and the children’s education at wealthy northeastern universities.  Perhaps, ironically and in a sign of the times, the actor-uncle affords the siblings theatre, culture, and the occasional loan from his investment portfolio.

Sadly, America no longer has a counter-culture or art that is genuinely provocative in nature.  As the recent episode involving Miley Cyrus so clearly demonstrates, today’s notion of the provocative is merely that act which offends sexually the most sensibilities.   Inconsequential to a fault, most of our culture drones on without serious effect, except to offer the momentary smile or frown.

I have not experienced the final two plays of Nelson’s quartet: Sorry and Regular Singing, the cycle’s finale that just opened at the Public Theatre last Friday on the 50th anniversary of the assassination of JFK.  I will trust that the meal as ritual persists; that the intersections between family tragedy and national tragedy will continue; and I can only hope that the challenge to the status quo complacencies that so absorb our current culture will intensify. 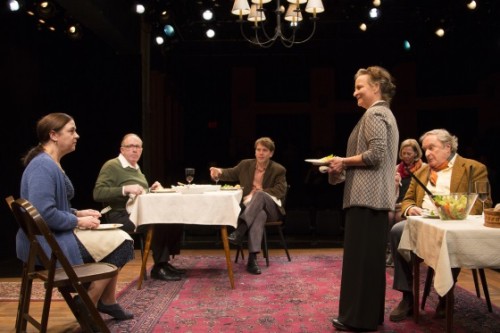 If at our next communal gathering of food and family, we—like the Apples—agree to take platitudes and conventional speech off the table; if we agree to put our fear of retribution and judgment on the back-burner for an hour or two; if we simply speak our minds about what we wanted most for each other and our country, then we might find the courage to once again move beyond words and act on principles.