Concert Review: ‘Marvin Hamlisch, One Singular Sensation’ with the BSO and Guest Vocalists, Jack Everly, conductor at the Music Center at Strathmore

Composer/conductor Marvin Hamlisch’s first hit song was in 1965 and for the next 47 years, until his untimely death in 2012, his canon of work has been unrivaled. Very few people’s work have been heard in films, onstage, and on television, but Marvin Hamlisch wrote for all three. Baltimore Symphony Orchestra’s principal pops conductor Jack Everly has been associated with Hamlisch since 1980 when he conducted the first national tour of They’re Playing our Song and later The Goodbye Girl on Broadway so it’s only natural that he would be the conductor/narrator for the BSO’s tribute called Marvin Hamlisch: One Singular Sensation at the Music Center at Strathmore.

Orchestral selections included the overture from The Goodbye Girl, some music from Hamlisch’s first movie The Swimmer and a song cut from Sweet Smell of Success called “That’s How I Say Goodbye,” which was one of the best songs written for that score. It was interesting to hear a few pieces that Hamlisch wish he had written as well. Songs like “Somewhere” from West Side Story are just one of those examples. Everly’s personality is very likable and his conducting style is fun to watch while he leads the BSO. I would like to mention that the orchestra soloists were top notch, particularly Lura Johnson’s piano solos on “The Entertainer,” which was part of Hamlisch’s Oscar winning adaptation of Scott Joplin’s music for The Sting and Chang Woo Lee’s cello feature on the music from The Swimmer.

Featured vocalist Marissa McGowan was handpicked for Hamlisch’s last musical called The Nutty Professor, which is based on the Jerry Lewis comedy classic of the same name. She wowed with “The Way We Were” and “Nobody Does it Better,” which is from the only James Bond film scored by Hamlisch called “The Spy Who Loved Me.” McGowan had a nice stage presence and performed her songs with polish and great emotion. 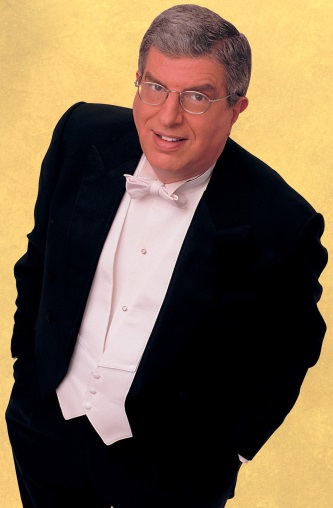 By far the highlight of the evening was the trio of McGowan, Felicia Curry, and Kate Fisher performing “At The Ballet” from Hamlisch’s masterpiece A Chorus Line. The power of the three voices against a enlarged orchestration brings up how wonderful that song really is.

The evening also featured projections of Hamlisch from childhood to maturity as the cast of singers sang fittingly “One.”

As much as I enjoyed what was part of the concert I have to raise the question as to why, when this sort of program is put together, do we end up hearing the same songs. I get that most audiences only want to hear what they know but I would have liked to have had a little more of Hamlisch’s last few scores represented. While there was some music from Sophie’s Choice and Same Time Next Year it would have been great to hear something from his last feature film The Informant or his last work Behind The Candelabra, which was recently aired on HBO and was a biopic about Liberace just so the audience could get acquainted with some of his last works. With the scope of Hamlisch’s career I just wanted a broader representation of his music.

Marvin Hamlisch has often been called the people’s composer and I understand why. His music is very accessible and easy to sing along to. But more than that he was a tireless spokesman for music education and mentored many young musicians. This brings up the kind of man he was. Hamlisch was a musical genius onstage and a great man offstage.

This concert remembers a great man and you have one more chance to see it today at the Meyerhoff Auditorium today. Memories may be beautiful and Hamlisch left us with plenty musical ones. Everly and company have put together a fitting tribute.

Running Time: One Hour and 50 minutes with one intermission

Marvin Hamlisch: One Singular Sensation was a one night only concert at the Music Center of Strathmore in Bethesda MD on Jan 23rd 2014. It plays through Jan 26th 2013 at the Meyerhoff in Baltimore MD.

For future events from the BSO at Strathmore and the Meyerhoff click here.