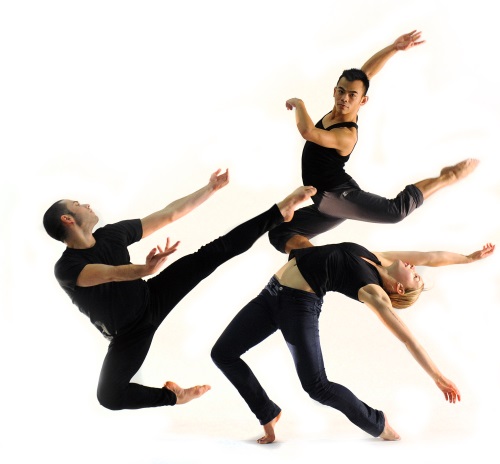 Company E returns to the United States with a suite of choreography that spans the globe for a two-night run at the Montgomery College Cultural Arts Center on Friday, February 7 and Saturday, February 8. VOICES, a presentation of Montgomery College and Company E, is the Company’s first concert in the US in almost 14 months. During that time the Company has been working around the world, from Kazakhstan to Argentina, Spain to Italy to Tajikistan. VOICES showcases the company’s deep international roots, bringing works from six different nations, including Israel, Spain, Italy, Kazakhstan, the Philippines, and the United States to the stage.

“We’re ecstatic about this program,” said Montgomery College’s Perry Schwartz, Producer/Director in the Communications Department and the leading voice in bringing Company E to Montgomery College’s Theatre One, a 500-seat theatre. “Montgomery College is one of the most internationally diverse institutions of higher learning anywhere in the country. This company represents on the stage exactly what we aspire to in the classroom and on the campus. World-class choreography and artists from the Philippines, Kazakhstan and right here at home all on one intimate program in our black box theater.”

“We also want to make this a show priced to sell. We want everyone to see this Company and this concert, and so we’ve set tickets at $10 for the general public and made it free for Montgomery College students, faculty and staff,” continued Schwartz.

The evening’s centerpiece is the world premiere of PULVER (DUST) by celebrated Italian Choreographer Walter Matteini. Matteini, Director of Company E’s sister company, ImPerfect Dancers of Rome and Pisa, Italy, is fast-tracking the international scene, creating ballets and touring throughout Europe and, this spring, South America and Canada.

“This program is a dream for us,” notes Executive Director Paul Gordon Emerson. “Company E, as a repertory company, is not committed to one person’s inspiration in the moment or one vision. We’re about finding the most extraordinary work we can anywhere we can — and combining those ideas into a program that gives the audience food for thought, inspiration for the soul and the pure enjoyment of great artists at work.

“Our collaborations with the Diplomatic Community, both overseas and here in DC, foster everything we do — its why we can make it happen. PULVER is possible through the support of the Italian Cultural Institute. FEW, by Spanish Choreographer Thomas Noone, came to be through the support of the Embassy of Spain. All our Israeli work has received invaluable support from the Israeli Embassy. Company E shows are true collaborations across many nations and many disciplines. And this one is a great, great example.”

“PULVER, by Matteini, is a deep, emotional work with a gorgeous score that is signature Walter,” noted Kathryn Sydell Pilkington, Company E’s Co-Director. “Walter is a passionate choreographer. He is interested in the human spirit, in the things which bind us together. PULVER is about a man who is dead but still present in the human world. But he doesn’t understand he has died, and that everyone he knows can no longer see him even as he sees them. And as his body, and spirit, begin to fade and pass on, the dust that he leaves, as it touches others, allows him to see inside them, into their spirits, in profound ways.

“To see a concept like that realized by a master choreographer is a remarkable thing. I think it will leave the audience spellbound — I know that’s what its done to us as dancers.”

PULVER is just one work on an international evening. Also included in the concert is:

Few (2012): Choreographed by Barcelona-based choreographers Thomas Noone and Nuria Martinez and set to an original score by Spanish composer Miguel Marin, FEW is about the small things in the world — the sense of what it is to be one of only a few remaining. Filled with imagery derived from the natural world, FEW is haunting yet somehow also enchanting. Raised in the UK, Noone and Barcelona native Martinez are a vibrant example of the international flavor of the contemporary dance scene in Spain. They were chosen in a competition by Company E of over 100 Spanish Choreographers in a search which took over a year. Made possible by the Embassy of Spain and by the Spanish Ministry of Culture, FEW is a quintet which has won hearts both here and in Spain itself.

Alma (2009): Alma was the first work commissioned by the Company in its signature NEXT series, a choreographic competition which seeks out the finest young choreographic talent around the world. The choreographer, Rachel Erdos, is a Tel Aviv-based Israeli choreographer known for taking risks. In ALMA, which means “apple” in many languages and is also the name for a young girl in Erdos’s ancestral Hungarian home, Erdos employs 80 green apples on the stage to visceral effect. A duet that dances literally around the ideas of Adam and Eve, it is at once sleek and sublime.

11: Thoughts on the Passage of Time (2011 – US PREMIERE): Choreographed by Company E’s Executive and Artistic Director Paul Gordon Emerson and Co-Artistic Director Kathryn Sydell Pilkington is the signature work of another of Company E’s sister companies, SAMRUK DANCE COMPANY of Almaty, Kazakhstan. A meditation on life, and on the passage of time itself, it is a work for 11 dancers and a journey of humor, love and the inevitability of time.

One of the real surprises of the Company E Washington, DC season is the participation of guest artist Aiman Akmejanova from Kazakhstan. Ms. Akmejanova, a soloist for Samruk Dance Company, is with Company E for three concerts in February, contributing her own signature work and style to the international nature of the Company.

“One of our deepest dreams and goals is to have artists from the many countries in which we work come to the States to work with us for a time,” said Emerson. “They bring so much talent, insight and enthusiasm with them, and the chance to showcase them and their artistry for US audiences is very special. Kazakhstan is an unknown here in the States, and Aiman is the best possible cultural ambassador for her remarkable country.” Akmejanova will present a Kazakh folkloric work on the Company E program, deepening the insight audiences gain into a far-off land with a fresh new voice.

$10 General Admission. FREE to Montgomery Community College students, faculty and staff. Tickets may be purchased by calling the Box Office on 240-567-5775 or online.