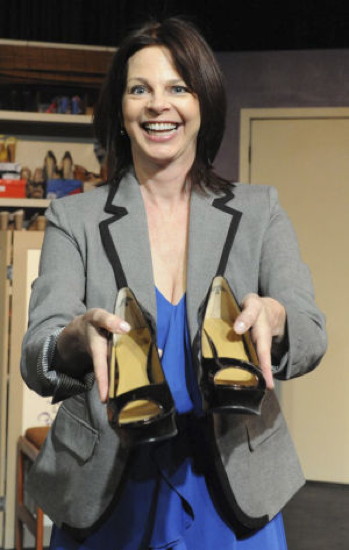 The Bay Theatre Company rolled out their one-woman show Bad Dates, written by Theresa Rebeck, in their new location at the Chesapeake Arts Center in Brooklyn, MD. Directed by Richard Pilcher and starring Janet Luby as Haley Walker, this show is a marvelous combination of humor, honesty, and vulnerability. The setting is Haley’s bedroom in her rent-controlled New York City apartment that she shares with her 13 year-old daughter, Vera.

The opening scene reveals Haley’s obvious shoe fetish, of which the shoes and their boxes are part of her bedroom décor – from floor to ceiling and hidden under both sides of the bed. She even has a bench to put her shoes on.

As Haley promenades around the bedroom trying on various pairs of shoes while getting ready for her “cholesterol and colon date” (we later learn), Luby delivers information on varying topics by breaking the fourth wall (which I love!). Drawing the audience into her character’s world, Haley certainly has had her share of not only bad luck but bad dates.

Previously married, she elaborates about her loser ex-husband, her teenage daughter Vera who “exists” off stage, and how she acquired so many designer shoes at $30 bucks a pop – really it was only one pair, one time.

Luby is full of exuberance with a tad bit of edginess that instantaneously makes Haley a lovable character. She’s excited as she discusses her move to New York City, her waitressing job, the Romania mafia who owns the restaurant as a front for money laundering, her financial success, and then there is weirdo “bug guy” she had met at a Buddhist fund raiser, who she thinks is kind of cute.

‘Bad Dates’ is an entertaining production and it’s impressive when one person can successfully captivate an audience for an hour and a half.

As the show progresses, the audience learns her “cholesterol and colon” date was obviously a bad date. Who wants to listen to a guy go on about how high his cholesterol is and how it has affected his colon? Not Haley. Moving on to the next date, a blind date that her mother has set up, Haley meets him at her restaurant. Though we don’t witness this date either, Haley knows instantly it’s going to be yet another bad date, because he’s ” just not that into her,” so Haley sticks him with their rather big check. Good for her! 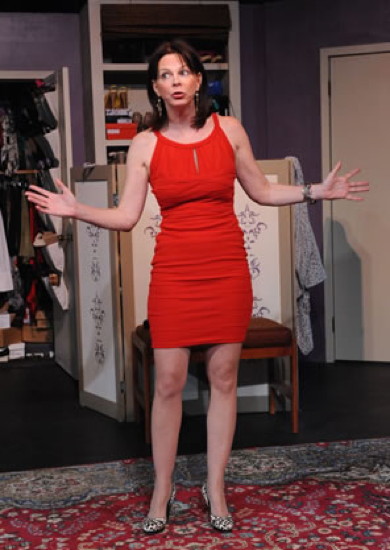 At the end of the first act and the beginning of the second, Haley decides to take matters into her own hands and calls a former boyfriend. Finally, she has had a good date! As Haley preps for her night with her new guy, Luby takes Haley to a new level of confidence and likability. For a brief moment, single gals everywhere get to live vicariously through Haley and hope for her dating success, while lamenting over their own bad dates.

An hour late, Haley’s good date is yet another bad date – and a no show. She calls her good date at home, only to learn that his “gone south” relationship had not gone that far south. Luby exquisitely demonstrates Haley’s most anguished moment causing a complete silence to fall over the audience. Truly in agony, Haley gets a surprise phone call from her bartender BFF, Eileen, only to find out that her Romanian boss is out of prison. Now she is forced to make a decision for herself, her daughter, and her life. What she is about to face, what she is about to do, is a turning point for Haley and that sometimes one has to shift their perception in order to see what is right in front of them.

Bad Dates is an entertaining production and it’s impressive when one person can successfully captivate an audience for an hour and a half.

Running Time: 1 hour and half with one 15-minute intermission.