Theatre Review: ‘Coyote on a Fence’ at Colonial Players of Annapolis 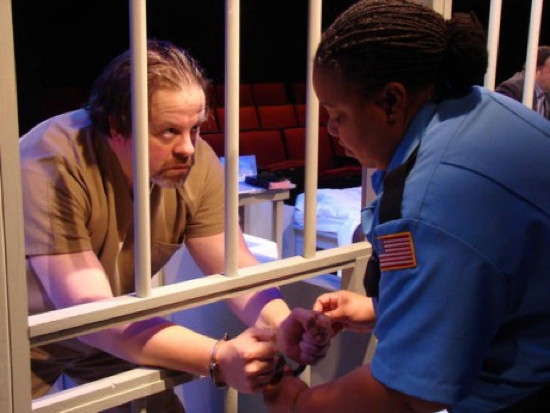 Colonial Players’ production of Coyote on a Fence features an unflinching ensemble of actors willing to bring depth and humanity to characters capable of inhuman acts of cruelty.

The story concerns John Brennan, a morally ambiguous anti-hero who plays chess, fights for justice, and just so happens to be on death row for a crime he claims he did not commit. Brennan is still mourning the recent execution of his friend and cellmate, when he learns that someone new is moving into the vacated cell. Enter Bobby Reyburn, an illiterate religious fanatic and white supremacist who loves to do animal impressions.

…’Coyote on a Fence’ is riveting, and asks a host of tough questions…

Two supporting characters serve as outside perspectives to life on the inside—an “over-it” female prison guard, and a morbidly curious New York Times Reporter.  Brennan and Bobby’s unlikely but inevitable friendship forms the basis of the plot, but playwright Bruce Graham never makes good on the potential for danger, even though his two main characters are convicted killers—and more importantly, characters in a drama. The characters have clear motivations, but stakes are not high enough to drive almost two hours of action.

This is not to imply that a play about murderers has to be violent, but Graham’s dramatization focuses more on nailing down a message than on exploring all the possible intricacies of his characters’ lives. The script invests so much energy in milking poignant moments that the play feels unrealistic, more like a soapbox for the playwright’s opinions than an actual story. Ironic, considering Graham was inspired to write Coyote after reading an article about James Beathard, a death row inmate whose true story transformed into that of the fictional John Brennan. 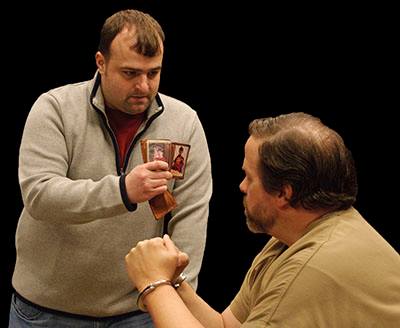 The production is compelling, but the actors are the ones doing most of the dirty work of character development. Thom Sinn’s portrayal of Brennan is charismatic and sinister, transforming Brennan’s lukewarm protestations against the death penalty into sociopathic rants. His performance leads you to believe Brennan is capable of pure evil, which loads the plot with suspense until the script reveals the underwhelming truth of his actual crime. Eddie Hall, as Bobby, counters Sinn’s understated malice with such exuberance that you almost forget Bobby landed himself in prison after burning to death thirty-seven African Americans. Hall tempers Bobby’s evangelical hatred with innocence, and the result is terrifying and thought provoking. Jeff Sprague plays reporter Sam Fried, and deftly walks the fine line between repulsion and curiosity. Kecia A. Campbell rounds out the cast as prison guard Shawna DuChamps. In the final scene, Campbell displays unexpected, evocative dimension to her character.

The direction by Edd Miller is minimal and organic, but a few important plot points are unclear. Some scenes take place in the present while others occur in the past, but there is no indication of a passage of time beyond inconsistent lighting transitions and a note in the program. The non-linear structure keeps the pace moving, but the final plot twist loses impact if you don’t know that the scenes occur in disparate places in time.

The first half of Coyote on a Fence is riveting, and asks a host of tough questions— it’s a shame that the second half tries to answer those questions for you. However, thanks to the efforts of a very brave ensemble, the production does succeed in challenging your sympathies and expectations.

Advisory: Coyote on a Fence contains course language throughout, and mature subject matter.