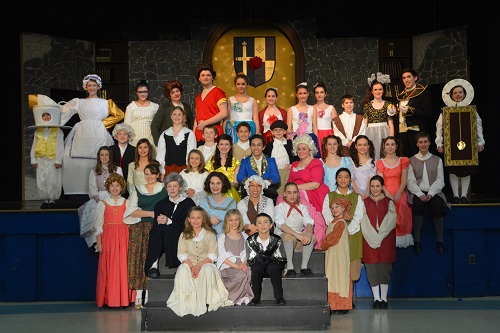 The cast of ‘Beauty and the Beast Jr.’ at Aldersgate Church Community Theater. Photo courtesy of ACCT.

The joyous voices of grandparents and their grandchildren could be heard singing the title song “Beauty and the Beast” after they saw the Disney movie come to life on stage at the Aldersgate Church Community Theater in Alexandria, Virginia. Beauty and the Beast, Jr. with music by Alan Menken, lyrics by Howard Ashman and Tim Rice, and book by Linda Woolverton, is a shorter version of the Broadway show based upon the popular Disney animated film.

…a fun outing for the whole family.

Last year, ACCT produced Disney’s The Little Mermaid, Jr. It made such a big splash that it has been nominated for Best Production for Young Audiences by MD Theatre Guide for the 2013 Readers’ Choice Awards.  The voting is open to the public until February 10th, 2014.  Visit online to cast your vote for your favorite production! 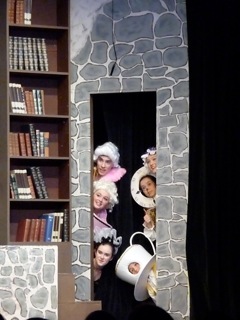 Emily Flack and David Jarzen return to the stage as Belle and the Beast after successfully playing the roles of Ariel and the Prince in last years The Little Mermaid, Jr.  Emily truly gets to shine when she sings the song “Home” about how even though the Beast has locked her in the castle, her heart is still very much at home.  Her vibrato is steady and strong, creating a beautiful sound.  David is fun to watch, especially during the song “Something There” where he makes big steps into becoming less of a beast and more of a gentleman.  Instead of having the posture and movement of a Beast, David was directed to stand upright and walk normally. The focus was on the beast within; his beastly bad manners with him learning how to be polite, a gentleman, and loving.

The costumes designed by Georgia Harlow are creative and really quite wonderful.  A lot of love went into the costumes which really helped to define the characters such as Cogsworth the Clock (played by a lively Claire Havranek) who has a gold pendulum for the body and a circular clock headpiece.  Mrs. Potts (played by a motherly Logan White) wears a mop cap and dress made to look like a tea pot including a spout made as part of the sleeve of the right arm.

Belle would rather be locked in the castle of the Beast than to marry Gaston who is hailed as a local hero and the “greatest hunter in the whole world.”  A very funny and talented Austin Harlow does an exceptionally fine job at portraying the boorish, uncultured and egotistical Gaston.  Together with his sidekick Lefeou (Brendan DeBie), the Silly Girls, and the villagers, these talented cast members perform one of the highlights of the show with a song appropriately titled, “Gaston.”  The Silly Girls (Tessa Madar, Emma Ekman, and Cassie Cope) with their colorful dresses, pig tails and umbrellas are hilarious as they each fight for the affection of their handsome hero, Gaston.  The light choreography by Caroline Austin gives the large cast enough movement to tell the story of the song and ends it with a dazzling MGM pose. 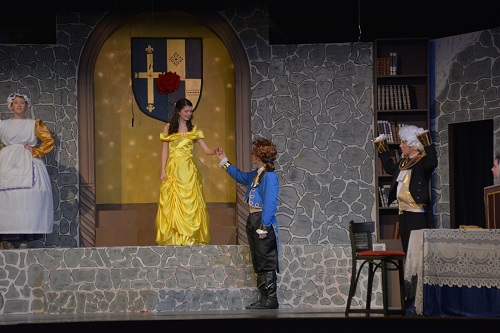 Rounding out the young cast of performers is William Havranek as Lumiere, McKenzie Sterner as Madame de la Grande Bouche, Stephen Porter as Maurice, Sarah King and Phillip Jarzen as Chip, Haley Shea as Babette, Emma Feddo as Entrantress, Pete Peterson as Monsiur D’Arque, Lyndsey Lawrence as Bookseller, Sarah Lore, Lucy Roberts, Katie King, and Shannon Flack as the Narrators, and of course the rest of the ensemble.

Beauty and the Beast Jr. plays through January 26, 2014 at Aldersgate Church Community Theater, 1301 Collingwood Road, Alexandria, VA.  For tickets, purchase your tickets at the door or online.