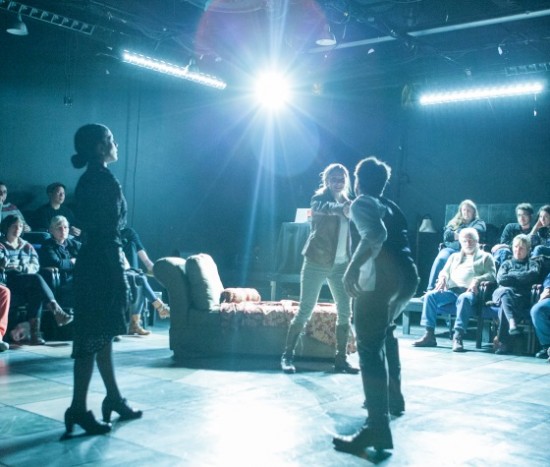 “Despair…despair,” the Beast moans from his shoddy 800 square foot apartment in Chicago. In a twist on the familiar Beauty and the Beast tale, Rorschach Theatre’s Glassheart downgrades this French prince’s fantastic palace to an American shoebox apartment in the middle of a terrible snowstorm, complete with a creepy building manager/witch, and a socially awkward cat-owning neighbor.

In playwright Reina Hardy’s clever retelling of this fairy tale classic, the Beast languishes and soliloquizes with his last remaining servant/lamp, while simultaneously waiting for the woman who will break his curse and shutting out all visitors with a terrifying roar and some intense self-loathing. 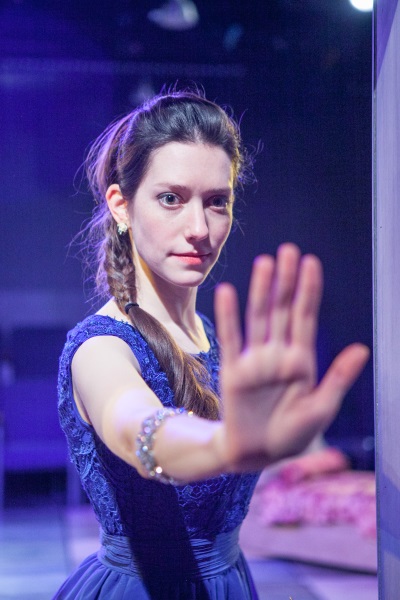 The earnest lamp, later named Only (Megan Reichelt), is arguably the protagonist in this poignant comedy about depression, fate, self-sacrifice, and love. In a Faustian deal, she reluctantly teams up with the creepy witch upstairs (Lynette Rathnam) when things go badly between Aiofe (Natalie Cutcher) and the Beast (Andrew Keller).

Only’s struggles play across Reichelt’s face in a way that is both touchingly subtle and over-the-top hilarious, while Keller’s Beast portrays an animal physicality occasionally betraying an old, studied gentility stifled by centuries of the curse that made him this hybrid being.

The blank slate of the Atlas’s black box space is fitting for Director Lee Liebeskind’s imaginative production that includes magic, chocolate, beer, hats and some intense interactions between vivacious women who own the plot of this play. The deep pink, blue, and green colors used by Lighting Designer Katie McCreary paired with the shards of glass hanging from the rafters remind you of the familiar Disney-fied version of this story, while original music by Aaron Bliden and Mark Halpern lulls you into the story. 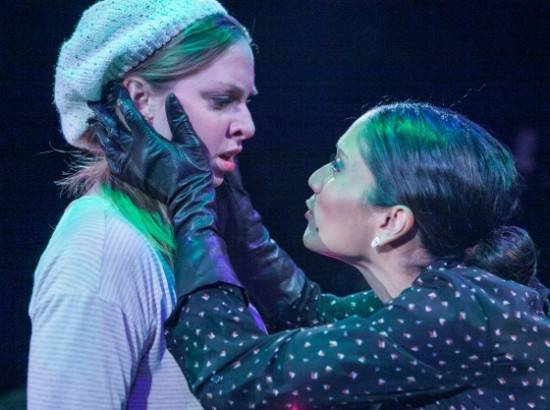 Playwright Hardy’s moving, clever writing is a delight, especially when brought to life by Reichelt, Cutcher, and Rathnam’s vivacious performances. The dialogue moves fast and includes some brilliant one-liners—allowing the women in this story to own both the comic relief and the cathartic struggles behind it. Hardy’s story falters a bit near the climax of the play, but it is nevertheless enchanting, funny, and thought-provoking.

Under careful direction from Liebeskind and a script rife with symbolism from Hardy, Rorschach’s Glassheart may leave you thinking that you’ve just experienced an allegorical work more akin to the Divine Comedy than to a children’s pop culture trope. But you’ll feel the emotions and existential questions raised by the play for days afterward. What’s in a name? What makes a life? What makes us human?

Running Time: Two and a half hours with one ten minute intermission.