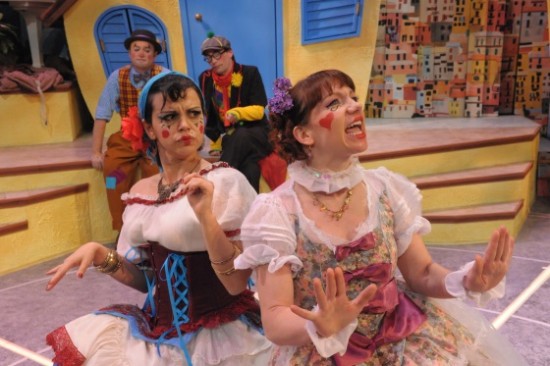 Some plays rely on insight, perceiving deep into the human condition and offering gems to an eager audience.  Some rely on wit, exercising the minds of eager audiences anxious to keep up with the fast pace of barbs and retorts.  Some plays, on tautness of their situations, keeping spectators on the edge of their seats in worry or suspense.  Some, leave the exhausted viewer spent emotionally and hoping for a better world.

Some, on the other hand, are not so much verbally driven or situationally astute or offering even the slightest in wisdom.  Some are more akin to the antics of clowns, and depend on what Aristotle’s lost poetics edified: a catharsis, not of pity and fear, but of laughter and high hilarity. 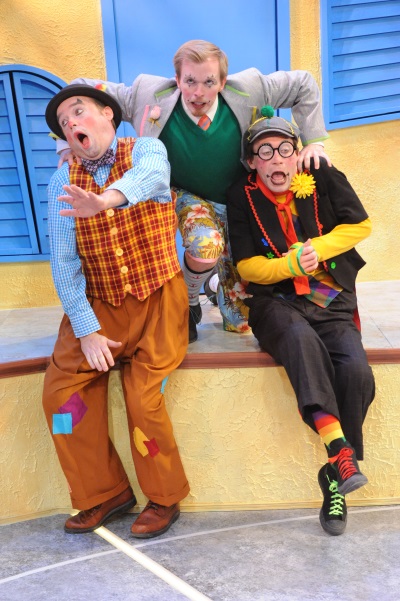 These plays are rooted in physical comedy, in sight gags and scatology, like erupting founts that evoke–you get the picture–and, most importantly, in the invention of character and the happenstance of situations.  These plays find their roots in the comedy of commedia dell’arte.

Moliere’s Scapin, now playing at Constellation Theatre warmly ensconced at Source, is one such play.  Freely adapted to the modern stage by MacArthur Fellowship winner Bill Irwin and writer/playwright Mark O’Donnell, this Scapin has a very contemporary, self-referential post-modern version of the classic story.

In Constellation’s version, you will not leave the theatre purged of fret from cathartic guffaws; but if you successfully tamp down all expectation of anything higher than a energetic silliness, you will go home with a smile on your face.

Director Kathryn Chase Bryer and her creative team have done a superb job establishing the comic environment for the production.  With A.J. Guban’s sets and lights combining whimsy with sleekness, and costume designer Kendra Rai’s donning the actors in the most cutout of comic strip fashion and makeup, from the get-go we are primed for fast-paced electric buffoonery.

Moliere gives the actors the simplest of stories with the most implausible of reversals and coincidences.  Let’s just say that it is a tale of love and deceptions and of servants and masters.  Let’s just say its a story about theatre people having a good time.

And the acting ensemble for the most part delivers, with some notable standouts.

Stealing the show is none other than the crazy Zerbinette, the servant girl who in typical classic comedy fashion is actually born to aristocratic parents.  Played by Nora Achrati, she enters the play at the top of Act 2 and sets the stage on fire with her antics, from her bizarro laugh to her wild-eyed proclamations and zany walk.  She captures the essence of the fantastic character, which is what Scapin depends on comically.

Two other standouts are the other beloveds, Hyacinth, played by Megan Dominy, and Octave, played by Matthew McGee.  Ms. Dominy gives her innocent young thing a pugnacious temperament that is always just one “hyacinth” away from exploding under her smiling facade.  Mr. McGee, on the other hand, creates the epitome of the whining aristocratic lover whose declining gene pool has left him without a brain to think with.

The rest of the ensemble does well embodying the farce.  Bradley Foster Smith does a nice job as the servant Sylvestre, particularly when Sylvestre takes on the role of Hyacinth’s fictional lowlife thuggish brother.  Manu Kumasi makes the most of his limited stage time as the conscientious Leander pleading his innocence as does Vanessa Radchulis as the sexy servant Nerine.

Carlos Saldaña and Ashley Ivey take on the two fathers, Argante and Geronte, and turn in solid performances.  Both could have added a little more of the buffoonish cruel master to their portrayals of the commedia parents which, in turn, would have given Scapin’s tricksterish persona more of a counterpoint to play against.

Michael Glenn tackles the lead role of Scapin in Constellation’s production and to say he has big shoes to fill would be an understatement, even though Bill Irwin’s clowns did not wear big shoes.  Glenn’s Scapin looks more the upstart office worker than the lowly maltreated servant of Moliere’s (and Irwin’s) play, however.  As a result, we never get the trickster urgency and raw immediacy that makes Scapin loveable despite his rather devious ploys at revenge and just deserts. 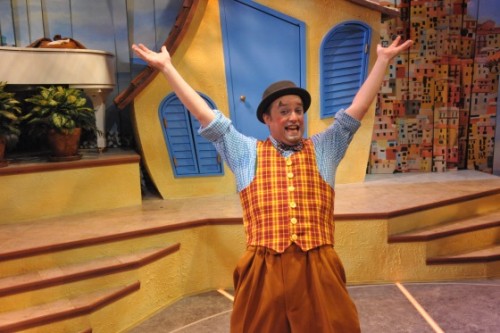 Despite the production’s shortcomings, you will enjoy this fast-paced Scapin; its sight gags and its youthful enthusiasm will entertain you as much as its fantastic piano playing.

That’s right, the tenth member of Scapin’s ensemble is none other that Travis Charles Ploeger, who plays George, the piano player.  Mr. Ploeger adds more than a sound track to the production with his onstage playing and composing; he establishes the production’s meta-theatrical layer.  His musical conversation is delightful, providing a verve and a flare to even the most cliché of theatrical moments.

On a cold winter night, when you might be tempted to huddle in your fur and die like a fly, the heat of nine actors racing around the stage to a rambunctious piano ditty, having the best of times as they jog about chasing one another, will melt your cold eyes.  By show’s end, you will be warmed to the bone.

Running Time: One hour and 55 minutes, with one intermission.