Theatre Review: ‘Tales of Beatrix Potter’ at The Puppet Co. 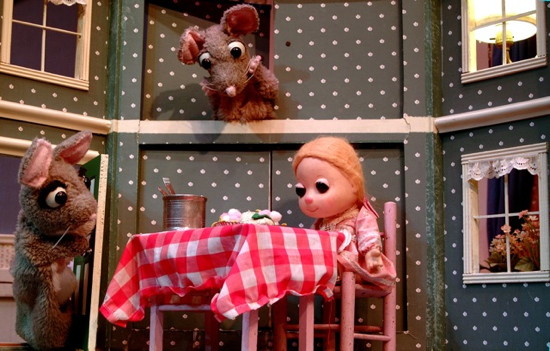 Two bad mice wait for Lucinda to leave the dollhouse so they can misbehave. Photo by Christopher Piper.

In “Two Bad Mice,” two mischievous mice find a small child’s dollhouse and decide to damage the beautiful fixtures and furniture in the house.  When the owner of the dollhouse discovers the destruction, she places a guard outside of the house to catch the vandals.  The mice quickly atone for their bad behavior and from then on the mice care for the house and the child.  So, the two bad mice turn out to be not so bad after all.  Hudert uses a large blond haired puppet for the child’s governess and Hudert’s own hands become the governess’s hands and the child is a small doll.  The two mice are also hand puppets that Hudert interchanges with the governess puppet throughout this story.

Christopher Hudert’s puppets are engaging and he does a great job ensuring each puppet has their own personality.

The next tale is based on “Jeremy Fisher,” who is a frog that decides to go fishing on his lily-pad boat to catch enough fish to have his friends over for dinner.  Jeremy runs into one obstacle after another but doesn’t give up his fishing plans until he encounters a fish that is way to big to catch.  When Hudert turns the blue curtains, previously hanging in the nursery for the “Two Bad Mice” tale, to the rippling water of the fishing pond, gasps of amazement were heard from the children.  Jeremy Fisher is also a hand puppet and this story comes with a lively toe-tapping song. 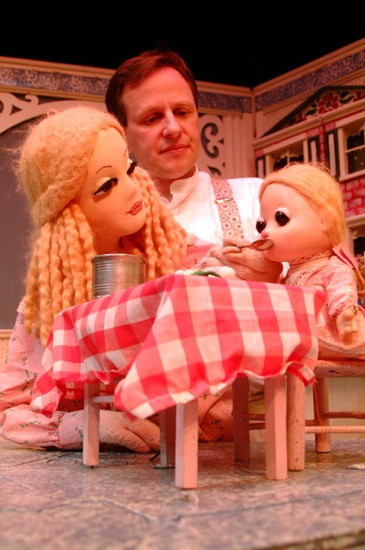 In the last story, “Jemima Puddle-Duck,” is a duck that wants to sit on her own eggs, but because the farmer’s wife believes Jemima is a “poor sitter,” she takes Jemima’s eggs to hatch them herself.  Jemima decides she must find a place off the farm to lay her eggs so she can hatch them.  Jemima finds what she believes is the perfect place to lay her eggs, but when a suave fox convinces her to lay her eggs at his home, she doesn’t realize the danger she and her eggs are in.  Will Kep, the farm’s dog and an adorable hand puppet, save Jemima in time?

Christopher Hudert’s puppets are engaging and he does a great job ensuring each puppet has their own personality.  I especially enjoyed Jeremy Fisher’s song that had most of the audience, child and parent alike, clapping along.