To the uninitiated, the works of William Shakespeare are more confusing than nuclear physics. Back in high school, I venture that many of us survived Hamlet and Julius Caesar thanks largely to Cliffs Notes Study Guides. Though I’ll always be grateful for those slim black and yellow pamphlets, I would’ve much preferred to see the Shakespearian crash course, the stage play, The Complete Works of William Shakespeare (Abridged). Written by playwrights Adam Long, Daniel Singer, and Jess Winfield, this 80’s satire condenses more than a dozen of the renowned writer’s most popular works into two hours of side splitting shenanigans. Silver Spring Stage boldly shoots for the fence with their version of this brash and animated parody.

While you may associate the works of William Shakespeare with a certain degree of class, formality, and sophistication, this play refreshingly and unsurprisingly does not. Director William T. Fleming unabashedly hammers away at the tongue-in-cheek material, creating a fun, coarse and mostly silly show. In it, the actors move at a frenetic pace, relaying the gist of each play by any bawdy means necessary. Hand puppets, stuffed animals, and interpretive dance are just a few cheeky examples. The performances go from outright wacky – the Capulets and Montagues duke it out as sumo wrestlers – to rather edgy – the stereotypes abound as Othello is predictably portrayed in a terrible hip hop rap, and Macbeth is not without references to kilts, golf clubs, and heavy drinking. Those with a wry sense of humor will enjoy the sarcasm, contemporary references, as well as the in-your-face banter that defines this show.

Of particular significance are the creations of William T. Fleming (Set Designer) and Properties Designers Nancy Davis and Joy Wyne whose deliberately unpolished inventions lend strongly to the play’s absurd and farcical nature. Fleming’s set is a mostly simple and bare space leaving the actors to freely run, dance, and literally flop around on stage. Actually, much of his work is showcased upstage; decorating the background are the archetypal masks (comedy and drama) alongside a white pillared balcony (used befittingly for the Romeo and Juliet skit) and a surplus of familiar, thick and very theatrical burgundy curtains. Likewise, Davis and Wyne opt for crude props that help every joke land – sock puppets, plastic swords, old footballs, carnival-style blow-up toys, and giant stuffed animal heads are just a few items that somehow find their way into the likes of Titus Andronicus, Henry VIII, and King Lear. Similarly Costume Designer Stacey Thomann comically blends the contemporary with the historic, dressing the actors in colored tights, Converse sneakers, and russet-toned frocks. The simple get-ups make for easy layering which happens a lot in this play as the trio quickly transitions from one sketch to the next. The actors humorously don gaudy blonde wigs, ill-fitting dresses, Jamaican knit-hats (during Macbeth of all places), plaid kilts, and a grab bag of other ridiculous costumes that garner laughs at every turn. That said, the production staff as a whole is a rock star contributor to the humor of this show. 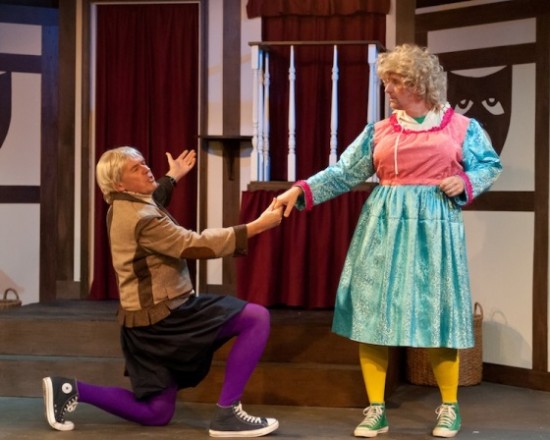 If ever there was a cross between the Three Stooges and a graduate of Julliard, it would be the actors in The Complete Works of William Shakespeare (Abridged). The cast of three not only has obvious chemistry, but are all tireless, engaging and, of course, funny for the duration.

As Steve, Steve Snapp sets the comedic tone of the show by immediately breaking the fourth wall and connecting with the audience. Perhaps the bravest of the trio, Snapp fearlessly bares all and earns big laughs during his extended solo. His “bar jokes” land and his rendition of “I Dreamed a Dream” stayed with me (unfortunately?) for hours after the play’s end.

Equally hilarious is Andrew Greenleaf as Andy. As the group’s perhaps most dimwitted character, Greenleaf does not shy away from the physical comedy, pushing any hubris aside to flaunt his falsetto and run around dressed as (a very unattractive) Juliet. Unafraid to dole out a bit of go-to base humor, Greenleaf’s constant upchuck pantomime is an audience favorite.

Rounding out the trio is the play’s female member, Jennifer Osborn. As JenO, Osborn is the cast’s most saucy contributor. Her delivery whether sporting a southern accent while performing in a “gory gourmet” cooking show or battling with a Star Wars light saber, is always confident and cocksure. I deemed her the unofficial leader of the company although I am unsure if that was the director’s or playwrights’ intention. Her engagement with the audience is appropriately snarky and sarcastic and thus comical in and of itself. Kudos to Snapp, Greenleaf and Osburn for undoubtedly giving it one-hundred percent and never once showing any sign of fatigue or lack of enthusiasm. Collectively their comedic timing is flawless.

This production is a dizzying, fast-paced, and curiously loud night of entertainment. Never a dull moment, there’s a lot going on and the pace lets up only sparingly. While I found the reverse sequence near the show’s end a bit overlong and perhaps unnecessary, overall, The Complete Works of William Shakespeare (Abridged) is a fun show that both children and adults will enjoy.  Whether you’ve never seen a single work written by Shakespeare or you’re a classically trained thespian, you’ll laugh out loud and maybe appreciate the iconic playwright even more thanks to Silver Spring Stage’s raucous show.