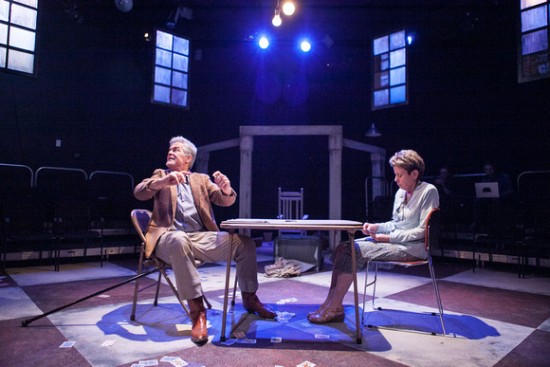 D.L. Coburn’s Pulitzer Prize winning play The Gin Game originally opened on Broadway in 1978. It starred two legends of the stage Hume Cronyn and Jessica Tandy and was directed by Mike Nichols. All three were nominated for Tonys with Tandy winning Best Actress. Their performances and direction were captured for PBS. To be honest, the script was no doubt helped by the star turns put in by Cronyn and Tandy and later E. G. Marshall and Maureen Stapleton.

The setting is the Bentley Nursing Home and it is here where we meet Weller Martin (Dane Galloway) a cantankerous old man with a foul mouth and who purports to be a master gin rummy player. Fonsia Dorsey (Adele Robey) is a new resident and is quite shy until she meets Weller. He convinces her to play gin rummy with him. Even though Fonsia knows nothing about the game she agrees and promptly starts to beat Weller at every hand. As this continues over weeks, Weller gets more and more frustrated at losing and his temper gets short with Fonsia. Through the games you find out the back story of the two characters and that things aren’t always what they seem to be. 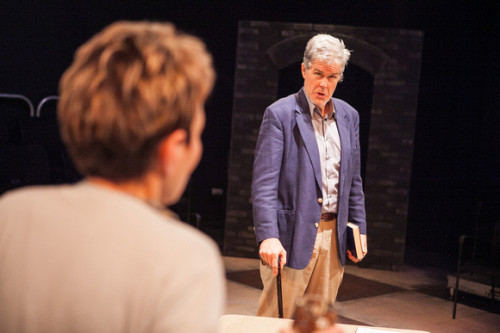 Performance wise, the actors get an A plus for taking on two roles so defined by the great veteran actors who have played them.  The biggest thing keeping them back is their actual ages. The characters in the show are both in their 70s. Neither Robey or Galloway look or act that old and they actually have remarkable energy for two residents of a nursing home. If I had to guess I’d say both actors are in their early or mid 50s and there is no attempt to hide this. My point is that we have two good actors out of their element. I would like to see them in another play sometime because I can see the talent is there. 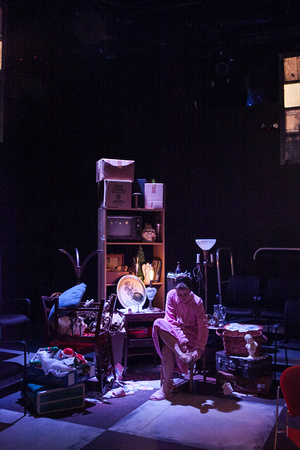 Director Robert Lutfy has staged the show in the round, which is not a wise choice for The Gin Game. Much of the action takes place at the actual card table, so you are always looking at the back of one of the actors.

I also want to point out that the poignancy in the script’s humor is missing in Lutfy’s approach. In the first scene Fonsia says, “I really wanted to be at the Presbyterian Home.” Weller says “Then why aren’t you?” Fonsia says, “Well, they have a rather unusual financial set up.” Weller says “What’s that?” Fonsia replies “You have to give them all your money.” That is meant as a laugh line but it brings up the way the elderly are treated and taken advantage of in this country. Lutfy’s direction glosses over the real meaning of this piece in that he does not bring out the irony of the piece.

Certain characters choices don’t serve the play well either. Weller is not a psycho. Yes, he does have a temper but there is something charming about him that is missing in Galloway’s portrayal. Fonsia is actually quite vindictive. After all she sold a house right out from under her son to get back at him. Robey plays her more plain and with very little change throughout.

There is also some rather strange sound design by Patrick Calhoun happening. The design tends to enhance the sickness of the characters as if it was a warped record. This doesn’t add anything and actually gets in the way of any tension that is being built between Weller and Fonsia. Erin Cumbo’s set is interesting to look at with windows hung around the stage and a dressing area for each actor so it’s as if you can see into the nursing home.

All in all The Gin Game isn’t a total winning hand, but it does have two good actors trying their hardest to capture the harshness of their nursing home environment and our society’s treatment of the elderly.

The Gin Game plays through February 2nd 2014 at Anacostia Playhouse which is located at 2020 Shannon Place, SE in Washington, DC.