Theatre Review: ‘The Old Masters’ at the Washington Stage Guild 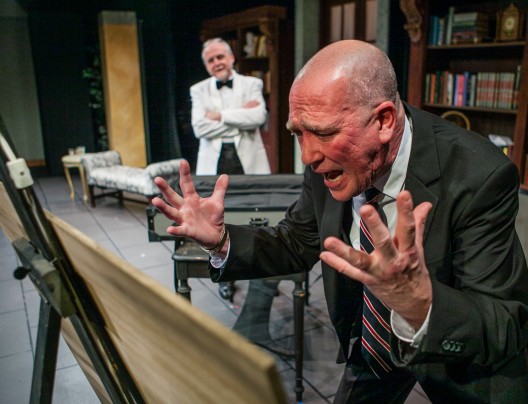 The next time you’re at the National Gallery be sure to visit the old Western Wing—in Gallery 10 you’ll find a masterpiece, the “Adoration of the Shepherds” – biblical in theme, Italian in setting. As you admire it, you’ll note that the curators have conveniently provided you with the name of a painter you’ve never heard of – Giorgione—as its creator.  The gallery’s layout is quiet, discreet, normal, boring; but amid all that peace and quiet you have no idea how much intense politicking, salesmanship, skullduggery (to say nothing of sexual impropriety) went on before this work made its grand entrance into Washington, D.C.  For all the dignity projected throughout the museum, it turns out there is a drama breaking out of nearly every frame.

If you love art, and you want a glimpse of the men and women behind the picture (so to speak), if you want the real story, then here’s what you have to do next: as you leave the Gallery take a leisurely stroll up 9th street to the Undercroft Theatre and have a look at Washington Stage Guild’s staging of Simon Gray’s The Old Masters.  Set in the tumult of 1930’s Fascist Italy, the play explores the personal and professional rivalries among arts dealer Sir Joseph Duveen, American art connoisseur Bernard Berenson, as well as their aides and lovers.  Hovering in the wings, unseen but very much on everyone’s minds, is none other than Andrew Mellon, the founder and chief benefactor of our National Gallery, whose purchase of “Adoration of the Shepherd” hinged upon whether Berenson would attribute the work to Giorgione.  And thereby hangs the tale … 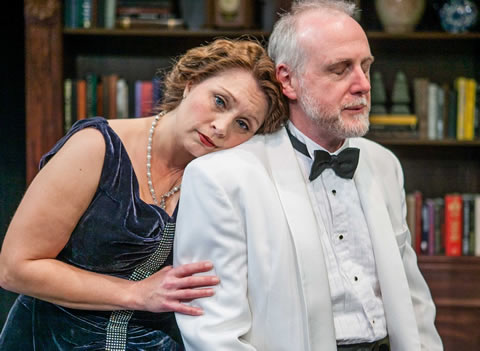 The grand estate where the action takes place, I Tatti (“The Touches”) is owned by Bernard Berenson and his wife Mary, who shared a passion for art and who together managed to revolutionize the art of identifying an artwork’s source.  Both were scholars of art history – a profession that, like acting (or crime, for that matter), doesn’t pay.  In an arrangement that Berlusconi himself might envy, Mary has accommodated her husband’s mistress Nicky, who lives with the couple, quietly attending to their finances and Mary’s health.  To fund this trio’s lavish lifestyle, Bernard had allied himself for decades with Duveen and worked as his attributor-in-chief, confirming the authenticity of classic artworks before they were sold on the international market.  Berenson quietly received a percentage of the sale for each attribution—an arrangement that would be seen as highly unethical today, but which was standard practice not too long ago.

Gray’s drama centers on the fact that Berenson, although desperate for money, has allowed his inner scholar to get the best of him, a choice that could mean his financial ruin.  He refused to give Duveen  the attribution for “Adoration” that he needed—Berenson is convinced that it was produced by Georgione’s more famous pupil, Titian.  Mellon, on his deathbed, had longed to complete his collection with a genuine Giorgione while Duveen, with only a few months to live himself, wanted to cap his brilliant career with one last million-dollar sale.  Berenson’s refusal to comply with their wishes wreaks havoc, and in a truly electric confrontation in Berenson’s library it becomes clear that everything is at stake for these titans of the art world.  It doesn’t help that both Duveen and Berenson are Jewish, keenly aware of Hitler’s rise, nervous about Mussolini and the looming threat that might engulf them both.

As Bernard Berenson, David Bryan Jackson offers us the quintessential scholar-cum–bon-vivant who is accustomed to fine art, luxury and convinced unswervingly of his own genius.  His patron and foil, Sir Joe Duveen, is fully embodied by Conrad Feininger, who is in fine form and exudes every inch of the larger-than-life persona required for an acclaimed (and knighted) international dealer.  Their work together on-stage is absolutely riveting, but Jewell Robinson holds her own as Mary Berenson, a woman wracked by disease but still filled with a passion for life; Robinson easily manages to upstage Feininger and Jackson both.

Complementing this trio are two aides-de-camp: Steven Carpenter is the very soul of discretion and double-dealing as Duveen’s assistant Edward Fowles. Although the character is poorly drawn by Gray, Carpenter manages to convey some of the subtlety that comes with being a trusted assistant and spy.  Meanwhile, the Berenson’s lover/assistant, “Nicky” Mariano, is given a fine turn by Thomasin Savaiano. Savaiano is the calm center of an artistic household that seems at times to be bursting at the seams with petty jealousies and regrets for past wild days.

Designer Carl F. Gudenius has transformed the small Undercroft stage, through some brief set changes, to suggest the grand Berenson estate—which today now houses one of HarvardUniversity’s most distinguished research institutions. Marianne Meadows provides appropriate Mediterranean lighting, and Sigríd Jóhannesdóttir captures the modern touches and décolleté fashions that prevailed during this period.  Sound designer Marcus Darnley sets the scene with some snatches of Respighi, Mussolini’s favorite composer, whose orchestral works made such an eerie soundtrack for the Fascist regime (his popularity today notwithstanding). 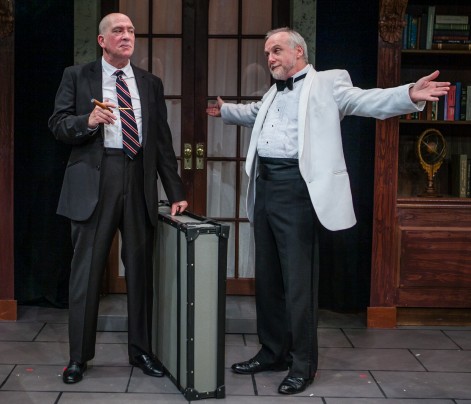 Given all the good work here, the chief regret is that Gray handles some of this material so awkwardly. The confrontation between Duveen and Berenson is masterful, but the play’s opening scene is as long as it is confusing, creating and crushing sub-plots that have little to do with the action.  We don’t need to know everything about these characters’ pasts, especially if they have no bearing on the outcome. The Old Masters works in three distinct moral universes – Fascist Italy, the international art scene, and the complex domestic life of the Berenson household.  Shifting from one to the other is needlessly awkward at times, with reunions interrupted by anti-Mussolini screeds for no reason other than the fact that the play takes place in the Fascist era.

Director Laura Giannarelli has assembled a stellar cast of Stage Guild regulars for the occasion, and has managed to identify some of the more important nuances here; a few merciless cuts might have improved the overall effect but Giannarelli has given Gray a better treatment than perhaps he deserves.  There was little she could do to repair the inadequacies of Gray’s script (playwrights get tetchy about edits, after all, and we’re sometimes reluctant to cut a writer whose work we admire).  But the topical nature of the play, the brilliant acting, and its connection to one of the city’s artistic meccas should be a major draw.

Running Time: 2 hours plus, with intermission.

Performances of The Old Masters are at the Undercroft Theatre, in the basement of Mount Vernon Place United Methodist Church, 900 Massachussetts Avenue N.W., Washington, D.C.  For tickets and directions call 240-582-0050, or at the Washington Stage Guild website here.