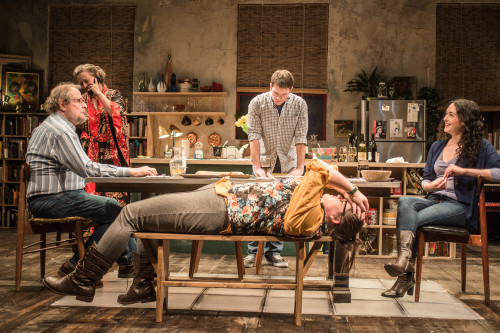 Studio Theatre is on a roll with new, and inspiring theatre.  The Apple Family Plays offered us insight into contemporary liberalism.  Edgar & Annabel takes us to the dark side of surveillance and mind-control.  And now Tribes, by Nina Raine, which is not only deeply political but deeply personal and heartfelt, rips the lid off any worldview that does not place empathy front and center, as that most necessary of human ingredients.

Tribes is clearly one of the best plays written in recent years (the 2013 winner of Drama Desk Award for Outstanding Play), and this production, one of the best of the season, is an emotional tour de force that resonates intellectually long after the curtain has come down and the audience returned to its habits of thought and body.

At the heart of the play quakes our ceaseless desire to belong, to a group, a community, or in this case a tribe.  The tribe under the looking glass is a Jewish family living in England.  This highly verbal, solipsistic family has a deaf child, whom the family has raised as if he were hearing. 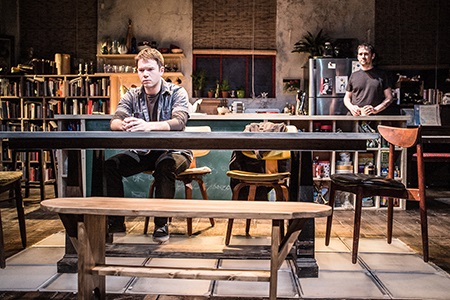 Christopher, the patriarch and the academic, obsesses with linguistics and rants against all uses of language that do not meet his idiosyncratic standards of appropriateness.  Worse still, he arrogantly asserts that his subjective theories on language and meaning are absolute truths and, thus, judges all alternative theories as ignorant or naive.

‘Tribes’ should most definitely not be missed…

Played by Michael Tolaydo, Christopher is as lovable as he is intolerable.  “If he could only see himself as others see him,” we scream; “the world would be a better place.”

Nancy Robinette plays Beth, Christopher’s long suffering wife, and she does so marvelously.  A writer in her own right, an aspiring novelist, she struggles to climb out from under her husband’s ideologically rigid worldview.

Their two hearing children, Daniel (played by Richard Gallagher) and Ruth (played by Annie Funke), are unable to fly the coup so to speak.  Like the mother, they suffer under the father’s oppressive belief system, which makes all forms of identity and expression that do not fit within his academic umbrella inferior and, thus, not worthy of respect.

Daniel wants more than anything to earn his father’s acknowledgement; he attempts an academic thesis.  Gallagher embodies Daniel’s frustration and we watch in desolation as he regresses further and further into an inarticulate jumble. 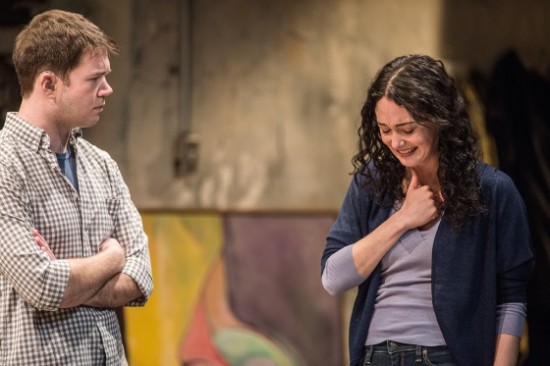 The character at the center of this tribe is Billy, however.  Billy, played with riveting gravity by James Caverly, wears a hearing aid.  His mother has taught him to speak and to read lips.  No one has taught him sign language.  The father’s rigid ideology asserts that the deaf community and its language is–ironically–too ideologically limiting for his deaf son.  Billy, he asserts, should not define himself by his deafness.

Though at the center of this family, Billy does not belong to it and, from the first light, we experience his isolation.  As the family argues about anything and everything, speaking twice as often as they listen, Billy remains silent and remote: not unhappy as much as unaware of his detachment and what he is missing.

Caverly’s portrayal is superb as we take notice of his every glance or gesture.

When he meets Sylvia, played by Helen Cespedes, a hearing woman born to deaf parents, Billy’s world begins to change.  Not only does he fall in love with the vivacious and talented Sylvia, but her connections to the deaf community and to sign language allow him to enter a community so much like his own interior space that he cannot help but be consumed by it.

Cespedes’s Sylvia, however, is not only the outsider to this family tribe; she is also the medium through which the play’s opposing worlds collide.  For Sylvia is also in the process of losing her hearing, a process that makes her understanding of loss profoundly greater than anyone else’s in the play.

And therein lies the story in this brilliantly constructed drama about the collision of worlds: the hearing and the deaf, the verbal and the kinesthetic, the linguistic and the interpersonal, the intrapersonal and the spatial, the psychologically balanced and the mentally disoriented.

As family members are forced to step into the role of empathizer–to know as nearly as possible what life is like for the Other–their understanding of the themselves and the world changes.

What makes Raine’s play so satisfying is that her family, although bearing all the marks of your typical 21st century dysfunctional family, is not dysfunctional; their tribe is purely ignorant of their tribalism and, as the play’s empathy works its way through their collective psyches, so does their awareness of their failings.

David Muse directs this production with clarity and insight, providing a physical embodiment of the play’s ideas and movement.  The pacing is perfect.

His design team has also done an outstanding job.  Set designer Wilson Chin places us in the family’s bookish world, and lighting designer Matthew Richards takes us to side locations with well-constructed luminary manipulations.  Costume designer Kathleen Geldard handles the attire with an appropriate lack of concern for appearances (for the life of me that Kimono moment is just weird).

Significantly, sound designer Ryan Rumery and projection designer Erik Trester added thematic elements to an otherwise realistic, fourth wall drama.  Their work punctuated the scene changes with esoteric sounds and visual depictions of music and ideas, all of which forced the audience to take notice of the clash of consciousnesses and step outside the play’s otherwise solidifying worldview.

Tribes and its rich tapestry of characters and ideas will most definitely leave you with much to discuss and consider.  Its story, however, so wonderfully constructed and with an eye (and an ear) for detail and nuance, is what makes this production such a wonder to experience.  In an age when more and more plays seem to abandon coherence of story for the sensational or the character-driven, it was truly satisfying to experience a vivid tale worth telling.

Tribes should most definitely not be missed, by anyone: it opens worlds beyond itself and reveals that empathy lies at the core of all our healthy relationships.

Running Time: 2 hours and 15 minutes, with one intermission.

Tribes plays at Studio’s Mead Theatre, at the corner of P and 14th Streets, NW, Washington, through February 23.  For tickets, click here.