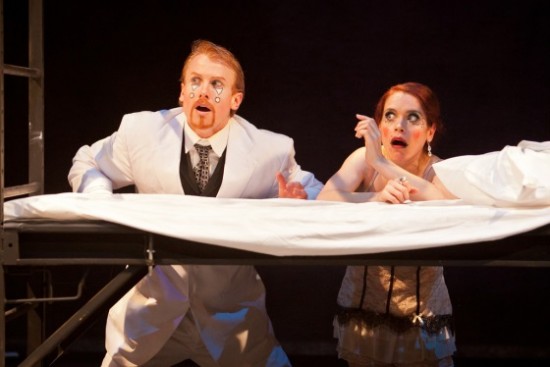 Philip Fletcher as Orsino and Kathy Gordon as Olivia. Photo by Koko Lanham.

Renowned for their inventive, exhilarating choreography, it is indeed thrilling to watch the kinesthetically amazing Synetic Theatre ensemble launch into full throttle dances we actually recognize.  In Synetic’s wordless production of Shakespeare’s Twelfth Night, set in the comparably silent world of silent film, the company dazzles with dances of the 1920s—the Charleston, Foxtrot, Jitterbug. To a one, the company shimmies and swings and whirls and boogies on down to the rockin’, rhythmic beats of Joplin, Armstrong, Goodman, Henderson, Ellington, Jelly Roll Morton, and Georgian composers Bidzina Kvernadze and Gia Kancheli.  It’s all one can do to stay seated.

Director Paata Tsikurishvili’s thematic concept of playing Shakespeare’s gender-bending comedy of shipwrecked siblings and mistaken identities as a long studio shoot of a silent black and white movie, creates a fertile visual feast of costuming and make-up within a primarily black and white palette. Director Tsikurishvili’s and Choreographer Irina Tsikurishvili’s ensemble assumes a punctuated, stylized movement form reminiscent of silent movie melodramas, where the action is conveyed by gesture and gait and expression, absent words.  And indeed, the company nails this retro-form, with the broad clowning antics of the comic characters being particularly pronounced, and a sure-fire hit with theatregoers of all ages. 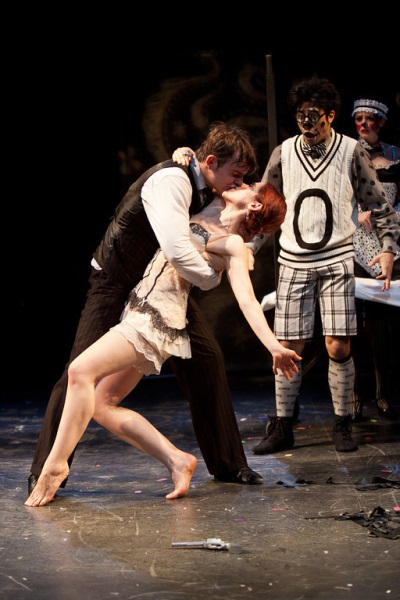 While the story in Shakespeare’s Twelfth Night includes a number of complicating and comic subplots that wind and unwind through the Bard’s wickedly twisting wordplay, Synetic’s wordless production primarily highlights the romantic confusions wrought by the shipwrecked siblings.  Sister Viola, played with signature energy and physicality by Irina Tsikurishvili, washed ashore on a foreign land, disguises herself as a man who looks just like her brother, Sebastian. Theatregoers unfamiliar with Twelfth Night’s story lines are advised just to sit back and enjoy the broad spectacle, neverminding about the narrative.

A rousing opening sequence portrays the sexy, swinging Jazz Age life aboard an ocean liner—whose genteel passengers are blithely unaware of the catastrophic shipwreck that awaits them.  In keeping with its retro concept of the silent movie era, Director Tsikurishvili employs a number of magically low-tech theatrical devices.  Among the most effective is the simple, but fantastically theatrical simulation of the ocean liner’s demise played out with a hand-made toy ship and a water-filled aquarium that sets the stage for the siblings’ washing ashore.  Alone with only her brother’s suitcase, Viola undertakes a melancholy, gender-changing ritual of donning her presumed-dead brother’s garments.  (Interestingly, clothed in men’s attire, one is startled by the petiteness of powerhouse performer Irina Tsikurishvili.)

Over the course of the next 100 minutes, the comic characters—in the guise of the camera crew—“film” the goings-on on this high-flying island, often filling the stage with New Vaudevillian antics that showcase their incredible acrobatic skills.  Eventually, of course, the romantic mix-ups—between the wealthy Orsino, played with slick conviction by Philip Fletcher, and his newly-hired valet, Cesario (aka Viola in drag), as well as the silent film diva Olivia, played with visceral passion by Kathy Gordon, and Viola’s brother, Sebastian, who is played with protective strength and swagger by Alex Mills—get righted and the play ends with two happy, heterosexual couples. Kudos to Shakespeare for broaching, however subtly, the mere suggestion of bisexuality.

Tricked by his fellow buffoons, Orsino’s misguided butler Malvolio, thinks the glamorous actress Olivia actually pines for him. Gordon brings an authentic, womanly determination to her dilemma, using all the tools of feminine mystique to flummox the foolish Malvolio.  Happily for Olivia, Viola’s brother Sebastian eventually reappears onstage, and actor Mills steps seamlessly into the masculine archetype that is Sebastian.

…a sure-fire hit with theatregoers

Synetic’s favorite clown Irakli Kavsadze plays Malvolio, truly one of Shakespeare’s greatest buffoons, and the audience howls.  He has perfected his poker-face, through belly-rolls and toupee flops and ridiculous yellow strappings.

The comic trio of Ben Cunis as the clown Feste, Hector Reynoso as Olivia’s drunkard uncle Sir Toby Belch and Dallas Tolentino as Belch’s foolish friend Sir Andrew Aquecheek, again display their extraordinary acrobatic abilities, leaping and flipping and diving and gyrating across the stage with split-second precision, bringing the house down on several occasions.  Tolentino also has a stand-out turn as a leather-clad boxer, before returning to clown-costumed tomfoolery. And as the foil to much of the clowns’ antics, Irina Kavsadze turns in a fine, straight-faced comic performance as the garter-belted, French-maid costumed Maria. 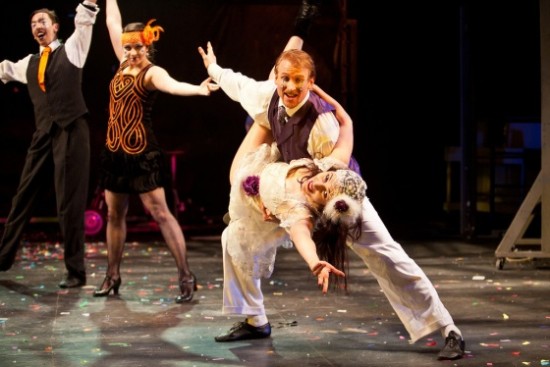 Philip Fletcher as Orsino and Irina Tsikurishvili as Viola. Photo by Koko Lanham.

The true stars of this production, however, are again the combined talents of Synetic’s cast and crew and designers, with the theatre’s trademark physicality and spectacle bringing the audience to its feet after the high-stepping dance finale.  The rousing closing number of Roaring Twenties dances, performed to perfection by the ensemble, gives us a fabulous glimpse at what this intensely trained company would look like on the dance floor, and it is spectacular indeed. Kudos to the entire ensemble, including Vato Tsikurishvili as the clown Fabian, and ensemble members Janine Baumgardner, Randy Snight, Zana Gankhuyang, and Rebecca Hausman.