Concert Review: ‘An Evening with Patti LuPone and Mandy Patinkin’ at the Kennedy Center, Eisenhower Theater 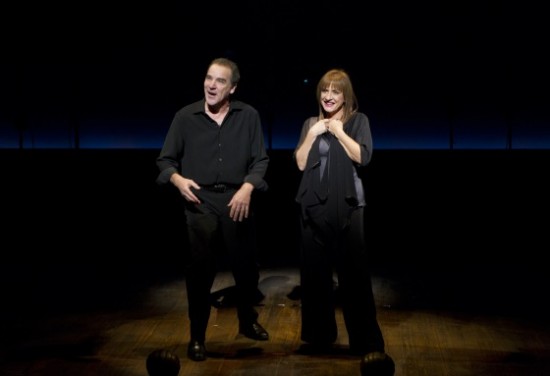 An Evening with Patti Lupone an Mandy Patinkin. Photo by Joan Marcus.

You’re waiting for the opening curtain in the Art Deco style Eisenhower Theater at the Kennedy Center. Enter illustrious Broadway veterans Patti LuPone and Mandy Patinkin—most recently of TV’s Homeland fame, and less recently of The Princess Bride infamy— who launch immediately into a spirited “Another Hundred People” from Stephen Sondheim’s Company, and the Broadway-lovin’ crowd at this production will go nuts. Patinkin and LuPone, who originally met when they played the leading roles in Evita in 1979, sail through this performance with an air of experience and comfort on stage expected from two such seasoned Tony winners.

Conceived by Patinkin and music director Paul Ford, An Evening with Patti LuPone and Mandy Patinkin is an homage to their own nostalgic past and the songs of musical greats Sondheim, Rodgers & Hammerstein, and Sir Andrew Lloyd Webber. It is a smooth performance with equal parts gleeful romping, painful heartbreak, and a glimpse at the lifelong friendships that support and foster talent like these two.

Patinkin and LuPone make it through 35 numbers in two hours, an impressive vocal marathon of classic Broadway pieces, though the song list may seem arbitrary and disjointed to the inexperienced theatre-goer.

The real strength of this show lies in LuPone’s solo numbers, classics like “I’m Old Fashioned,” “Everything’s Coming Up Roses,” and of course, “Don’t Cry for Me Argentina.” Unfortunately, a rushed “Baby It’s Cold Outside” uncovered a discrepancy in sound levels that often allowed Patinkin’s tenor to overtake LuPone. Still, a grandfatherly Patinkin and his comparatively youthful LuPone are charming throughout. They are accompanied by the talented Dan Hall on bass, and Music Director Paul Ford on Piano, and stand among a varied collection of colored ghostlights–another reference to their beloved years in the theatre together. Simple choreography by Tony winner Ann Reinking adds to the sense that these are two friends offering their favorite songs as a gift to each other and to the audience without much pretense.

The bond Patinkin and LuPone share and their mutual admiration may seem a little rehearsed and corny at times, but is ultimately touching. It will be a treat for those who grew up listening to Broadway records from the latter half of the 20th century.

Still, a warning should be issued: Do not see An Evening with Patti LuPone and Mandy Patinkin unless you already love the painterly style of Sondheim, the heart-wrenching romance of Carousel, and have at least a cursory knowledge of South Pacific—otherwise you’ll feel like a kid slouching at the kitchen table while the adults laugh at jokes you don’t understand.