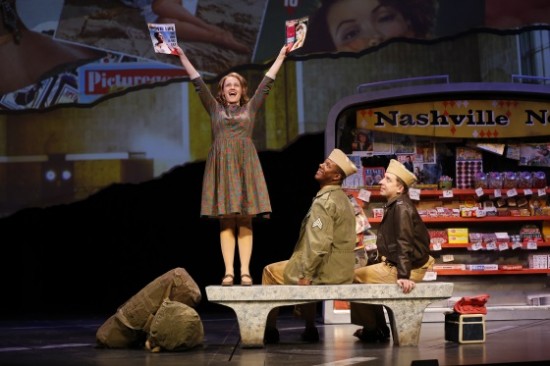 There is nothing better on a cold winter’s night than being out with your sweetheart and seeing a heartwarming musical with a strong score and book and a high-end group of performers. Violet at Ford’s Theatre is a show you might not be familiar with but you owe it to yourself to see it while it’s in town. It features many of the people that you probably have seen in musicals at Signature Theatre, which up front means this show is on the right track. With music by Jeanine Tesori (Shrek the Musical, Caroline or Change) and book and lyrics by Brian Crawley the score ranges from blues to gospel to straight forward theatre music. The show also gives an actress who primarily performs supporting parts around town a star turn, but I’m getting ahead of myself.

a beautiful piece of theatre.

Violet is based on The Ugliest Pilgrim by Doris Betts and follows the journey of  Violet (Erin Driscoll) as she rides a Greyhound bus from her home in Spruce Pine, North Carolina, to Tulsa, Oklahoma. As a kid Young Vi (Lauren Williams) was the victim of an accident involving her father’s (Bobby Smith) ax. The head came off and left a scar on Violet’s face. Violet thinks she is an unattractive person because of the scar and by seeing a con artist type of preacher (Gregory Maheu) in Tulsa, she thinks the scar will disappear and she will be beautiful again. Along the way she meets two servicemen named Monty and Flick (James Gardiner and Kevin McAllister). The two men take Violet under her wing and a relationship evolves between Monty and Violet. Those are the facts for now. 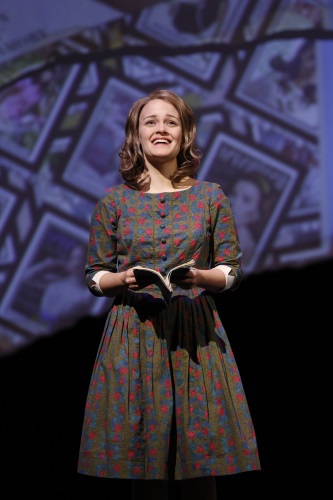 The show is set in the civil rights era, so prejudice runs rampant in the south with its segregated lunch counters, etc. The fact that Flick, who is an African American, is even seen with a white girl was something you just didn’t do in the south of the 1960s. The big question plot-wise is whether or not Violet’s scar is as bad as she says it is or is it all about her wanting something she doesn’t think she has already. The writers of this piece have said that the character of Violet is not to be portrayed with a visible scar, which is a good choice because it leaves things open to the audience. The scenes between Young Vi and her Father are all in Violet’s head, so it leaves us asking what the actual truth is. When theatre makes the audience think, I love it all the more.

Performance-wise there is plenty of praise to give. I’ll start with Kevin McAllister as Flick who, with a booming bass sound, delivers big on his solo called “Let It Sing.” His acting matches his voice in presence. James Gardiner as Monty vocally is just lovely on “You’re Different” and has great chemistry with Driscoll. Driscoll and Gardiner are a real life couple, so this should not be a surprise. Gregory Maheu as the preacher is suitably sleazy as a guy who preys on people’s problems. Bobby Smith as Violet’s father gives us a chance to see him in a dramatic role and shows us how versatile a performer he is. Lauren Williams as Young Vi captures Driscoll’s younger self and also has a nice feature with Driscoll called “Look at Me.” Kellee Knighten Hough tears the house down with her big gospel feature called “Raise Me Up.” It was a true highlight of the evening. Some of the ensemble standouts include Stephen F. Schmidt, Amy McWilliams and Chris Sizemore who play multiple roles including bus drivers, choir singers and creepy guys.

Erin Driscoll as Violet gives a performance that is going to be hard to beat this season. Her vocals on songs like “Lay Down Your Head” are angelic and her characterization and acting in general brings Driscoll from supporting player to lead actress in a big way. I must say though that no matter how you try to dirty up Ms. Driscoll, it is nearly impossible to hide her beauty. Violet in theory is an average looking girl. Driscoll is definitely not that.

The full eight-piece orchestration by Joseph Joubert is wisely used and is played by a terrific set of musicians under the direction of Jay Crowder whose vocal and choral direction of Buryl Red’s original vocal arrangements is audibly fantastic to listen to.

I would have liked a little more real scenery by Tobin Ost and a little bit less of Aaron Rhyne’s projections in the production design. While using projection is fine to give us the idea of movement, like going down the road on the bus, I always prefer real set pieces when setting location. The outside of the Greyhound bus terminal is but one example where there is a projection of the signage as opposed to a real set piece. 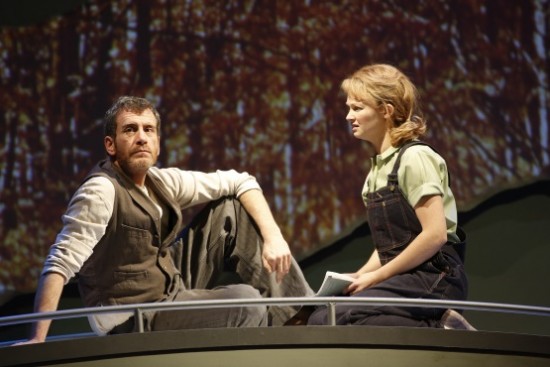 Jeff Calhoun’s direction never makes the show melodramatic and keeps the stage interesting to look at throughout. Calhoun has some of the area’s best performers in this show and he knows it. His direction brings out the best in everyone.

Overall Violet at Ford’s Theatre is one everyone should see. It doesn’t matter if you are a musical theatre junkie or someone who just likes good theatre, because this piece is for everyone. Featuring a dream cast with Erin Driscoll in a performance not to be missed, Violet is a beautiful piece of theatre.

Running Time: Two hours and fifteen minutes with one intermission.