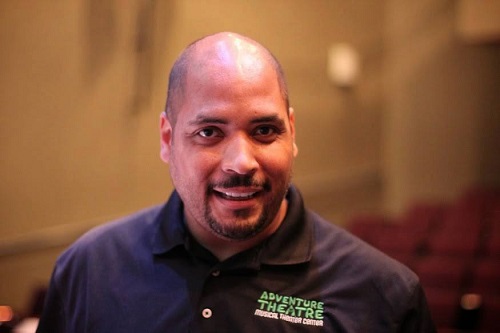 Jamaican singer-songwriter Bob Marley, known for his dreadlocks and his distinctive songwriting and vocal style, lives on through his recordings of “One Love, People Get Ready,” “No woman, no cry,” and “Redemption Song,” just to name a few.  His daughter,  Cedella Marley, wrote a children’s book called, “Three Little Birds.”  When Washington, DC-area based Adventure Theatre MTC’s Michael J. Bobbitt heard through a friend that Cedella wrote a children’s book, he read it and was excited to learn that it was based on Bob Marley’s song, “Three Little Birds.”  Inspired by the book, he adapted it into a musical of the same title which is getting its NY Off-Broadway premiere at The New Victory Theater this evening.  The New Victory Theater is New York City’s first and only full-time performing arts theater for kids and their families and classmates.

The story is set in Jamaica and is about an 11 year old boy named Ziggy. He is shy and only lives life through watching TV in his room.  He is afraid to go outside because he is worried about tropical storms and evil spirits. He is especially fearful of Duppy who likes to steal the hair of little children. To Duppy, hair is powerful and Duppy wants power. Ziggy has beautiful hair of dreadlocks and doesn’t want Duppy to steal his hair. Because he is scared, he stays inside all day. Everyone in his life doesn’t go outside and enjoy the world. Through a series of events he has to get out and learns “every little thing’s gonna be all right.”

Three Little Birds had its world premiere at Adventure Theatre MTC in February of 2013.   Named “Best Production for Young Audiences” by MD Theatre Guide’s 2013 Readers’ Choice Awards,  audience’s and critics agree that Three Little Birds is something worth singing about.  “Opening night last year was the most exciting opening night we ever had,” recalled Mr. Bobbitt.  Even three of the Marley kids were in attendance. He felt really good about it while he was writing the play but didn’t know it was going to be as good as it was until the designer run last year where it really knocked his socks off.

Thrilled that the show is now opening in NY, Mr. Bobbitt said, “You hope your shows will have a life past its first production, especially the ones you commission and develop. You want the show to have a life outside your own theatre. You hope to get the play published and for other theatres to produce it. But I could not really imagine, especially as a children’s theatre, a show transferring to NY. That is a huge thing to happen. And it happened really fast.”

So how did it happen? How did Three Little Birds get to fly to NY? Mary Rose Lloyd, the Director of Artistic Programming for the New Victory Theater goes around the world finding shows to bring to their venue. Well respected in her life in the world of children’s theatre, Mary Rose came down to see Three Little Birds. As soon as the curtain closed and lights came down, she turned to Mr. Bobbitt and said, “what are you guys doing next February?” He had hoped that was going to happen but he never thought it would happen so fast. It was serendipity because the show opened the day after Bob Marley’s birthday. The same is the case with the NY premiere which also opens the day after Bob Marley’s birthday.  He would have been 69 years old. 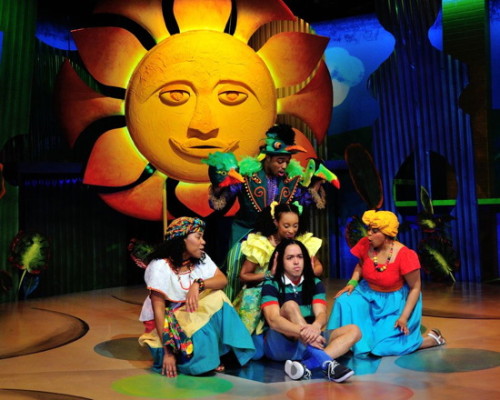 Michael J. Bobbitt who wrote the adaptation, expanded upon the story using the lyrics from “Three Little Birds” and the illustrations by Mariah Fox as a jumping off point. To add to the authenticity, he did a lot of research on Jamaica, on folklore, on language, and on culture and its history.   “It just seemed to come together to make this a fun modern day fairy tale,” Bobbitt said. He went on by saying, “The hardest thing was going through Bob Marley’s catalog of songs and deciding which songs would be used in the musical. I was surprised by how well the songs fit into the story. In some cases it almost seemed like he wrote the songs for this play. It just worked out that way. It’s so well integrated. We had fun putting it together.”

Besides writing the adaptation, Mr. Bobbitt is also the shows choreographer.  Since Jamaica is a mixture of cultures there’s no sort of distinct dance style. He says, “The only distinct dance style is sort of a modern social, club dance. They call it Dance Hall. And some of that makes it way into the show. It’s unlike other cultures where you can specially see what Asian dance looks like or specially see what African dance is like or German dance. The whole culture is infused from other worlds… So the dance movement styles are from a mixture of cultures.”

When I asked if there was any changes to the show from its world premiere, he said, “There’s no major significant changes. There’s little tweaks in stuff on the text. The dramaturg (Sybil Roberts) helped me find one plot point that didn’t track well. Then with the ‘bad’ characters like Duppy we simplified his motivation at the same time we ups the stakes for him. So just super small tweaks. We wanted to have orchestrations that were a little more authentic with some of the auxillery percussion that is in the Jamaican culture like a steel drum. The big change is that we have a five person band playing along with the tracks in NY which is just going to make it sound unbelievable.”

The thing he loves about the show is that it is accessible to musical theatre audiences. He is calling it “Bob’s Reggae Musical Theatre.”  Three Little Birds mixes Reggae with musical theatre to tell the story and the dances are the same. The biggest surprise to him are the number of dads in the crowd. He said, “When I look into the crowd I see more dads than ever before and I certainly see the most diverse audience we’ve ever had. I love looking at the audience and seeing heads full of dreadlocks and colorful clothes, just a mix of cultures of audience which is always what you want.”

Michael Bobbit wants audiences to walk away learning to “get out of your comfort zone and enjoy life. It is the spirt of Jamaica. Get out and get outside. Live life and enjoy yourself.”