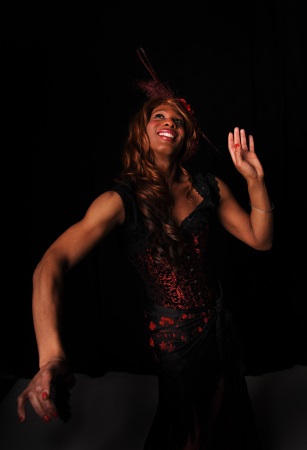 The audience assembled in the 16th Street church basement last Saturday, for Spooky Action’s latest opening, were witnesses to a truly amazing moment:  the introduction of a great, neglected world playwright to the American professional stage.  The experience was electric, and if companies across this country have an ounce of sense, they will be leafing through the works of Nelson Rodrigues feverishly from this moment on, looking for gems that are as fresh today as they were when they first premiered decades ago.

With its intricate choreography and stellar performances The Wedding Dress, by the late Brazilian playwright Nelson Rodrigues, is a kaleidoscopic experience not to be missed.  Part murder mystery, part telenovela, the production draws skillfully from the great avant-garde movements of the 20th century to create a truly complex, rewarding evening.  Set in 1940’s Rio de Janiero, the action revolves or rather dances around a fatal hit-and-run accident whose victim, Alaide, is fated to die on her wedding day.   As her life slowly fades to black Alaide’s thoughts fly deliriously back and forth, taking detours into a world of fantasy, then her past, revealing a trail of miscalculations and misdeeds with tragic consequences.

Rodrigues devoted his career to uncovering the seamy side of Brazilian life, and richly earned the nickname “pornographic angel” for his unflinching portrayal of the decadence he found around every corner.  The Wedding Dress, in spite of its controversial subject matter, made him an overnight sensation and audiences embraced not only his dark view of humanity but also—perhaps more importantly—his experiments with theatrical techniques as diverse as Expressionism, Surrealism and Theater of Cruelty.

…a kaleidoscopic experience not to be missed.

Director Rebecca Holderness has honed her cast’s movements to perfection, and the different levels of Alaide’s consciousness play out in front of you at break-neck pace, to sometimes hallucinatory effect.  Set Designer Vicki Davis has turned the Spooky Action space into a complex, textured arena where past and present, reality and fantasy, actor and film projections collide to stunning effect.   The angularity of the hospital screen, flung rapidly across the set and then just as rapidly retracted, serves as a projection screen for films of Rio traffic, dancers, musicians, etc., that comment on the action.  Erik Teague offers us crisp costumes evocative of mid-century fashion, with tasteful accents that evoke the brothels of the early 1900’s.  David Crandall’s sound design, meanwhile, punctuates the action and reminds us that much of what we see is unreal. 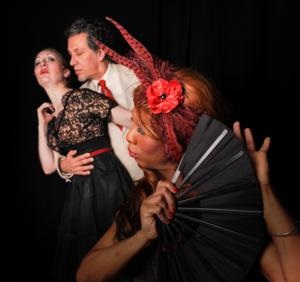 Anchoring the cast is Mundy Spears as Alaide, the selfish and delusional heroine whose plots blow up in her face.  Partnering with Alaide is her fantasy heroine, Madame Clessi, a Rio call girl who was murdered by a teenage lover, and who is given an exquisite turn by Dane Figueroa Edidi.  Edidi’s performance, like others here, adds new layers of complexity to this tale of love and betrayal.  Randolph Curtis Rand exudes all the charm and menace of Pedro, Alaide’s fiancée, who turns out to be as cynical and exploitative as his bride.  Tuyet Thi Pham is sharp as a knife in the role of Alaide’s sister Lucia, who repays her sister in full for stealing Pedro.  Frank Britton and Sue Strove fill out this dysfunctional family nicely, and there is a dynamite supporting cast of doctors, journalists, witnesses, etc., who change characters on a dime.

In The Wedding Dress’s first production, Rodrigues called for the stage to be divided into three separate areas, perhaps to help the audience sort out which scenes were fantasy, which were flash-back and which were contemporary.  This may have been a necessary concession for audiences in Rio some 70 years ago, who were accustomed to traditional narratives, but it would seem clunky and utterly unnecessary today.  Holderness has wisely directed her cast to play each moment to its fullest, with the result that the audience—like the dying Alaide herself—cannot tell which realm is which.  As a result, it is only later in the play that a storyline begins to come into focus, with our initial confusion giving way to a vision of Alaide’s troubled mind.  What makes this production especially rewarding is the way that Holderness and her team leave each of us to construct our own scenarios.  The final scenes are guaranteed to generate conversations the moment the curtain goes down, and as I write this I’m still reveling in the possibilities, as well as in the layers that have been added to Rodrigues’ text by the choices here.

This production kicks off a Nelson Rodrigues Festival, with staged readings, music and cooking workshops; coming as it does with the support of the Embassy of Brazil, it’s a reminder that our great neighbor to the south has a lot more to offer than just soccer and Bossa Nova.  Rodrigues was a truly remarkable writer whose work covered genres as diverse as hard-core journalism, film, stage, not to mention the occasional romance novel (which he published, ironically enough, under an assumed woman’s name).  Here’s hoping that Spooky Action sparks some serious interest in Rodrigues’ dramas, because he certainly deserves his place on the American stage.