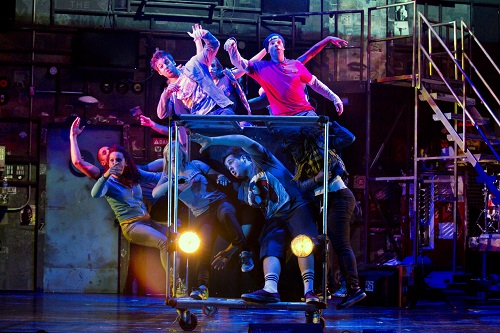 The company of AMERICAN IDIOT. Photo by Jeremy Daniel.

Green Day’s seventh studio album, American Idiot, is almost a decade old but the sentiments expressed have changed little since 2004. The American public is still oversaturated with media–television, 24-hour news cycles, images, and tabloids. The stage musical American Idiot, based on the album and now playing at the National Theatre, adequately reflects and occasionally celebrates the cynicism and dissatisfaction that prompted Green Day to write the album in the first place.

The sheer brilliance of Green Day’s music… shines through

The show begins with a series of audio clips detailing the state of the world and media–clips from American Idol, George W. Bush speeches, and news. Amidst flashing lights and images on the dozens of TV screens arranged on the wall behind the set, ensemble member Andrew Humann starts the eponymous, raucous anthem against apathy. 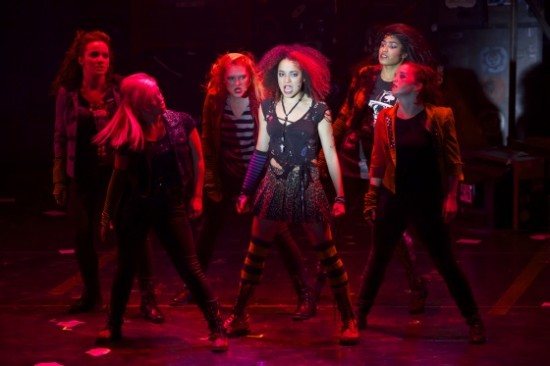 Olivia Puckett (Whatsername) and the Ladies of AMERICAN IDIOT (Photo by Jeremy Daniel).

A story eventually emerges from the parade of young punks cavorting around the stage: three friends, Johhny (Jared Nepute), Will (Casey O’Farrell), and Tunny (Dan Tracy) start out on the same page, but take three very different paths out of their apathetic existence. Johnny moves to the city, becomes infatuated with a girl he calls Whatshername (Olivia Puckett), and equally infatuated with the heroin provided for him by his Mephistopheles-like alter-ego St. Jimmy (Carson Higgins). Will stays at home to be with his pregnant girlfriend Heather (Mariah MacFarlane), settling for an unhappy relationship and eventual loneliness. Tunny joins the military, goes to war, gets injured, and falls in love with his nurse, the Extraordinary Girl (played admirably well in this performance by understudy Francesa Grannell).

The performers themselves were more than adequate–in particular, Mariah MacFarlane’s “Dearly Beloved” lent an emotional sincerity to “Jesus of Suburbia” that would otherwise have been largely lacking. Dan Tracy’s voice in “Are We the Waiting” had a remarkable clarity that was sadly lacking in the barrage of shouting that constituted much of the show. Most unsettling was the habit of the performers to smile, even while expressing some deeply cynical thoughts. Jared Nepute had few moments where he was not raging against the world, and his apparent enthusiasm was jarring. Only the quieter parts, such as when he played “Boulevard of Broken Dreams” alone on guitar as the city rose behind him, felt authentic. 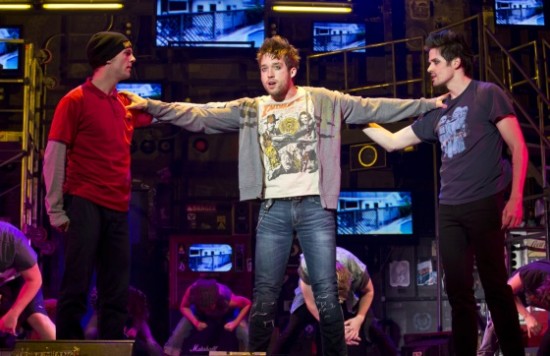 American Idiot (the concept album, at least) is supposed to be about the conflict between rage and love, and I’m not sure that’s what comes across in the stage musical. There’s a dissonance here, a stark contrast between the kind of agit-prop theatre that American Idiot could be and the confused attack on the senses it becomes. There is a lot of lust, a modicum of love, and an unusual amount of joy for a show about heroin abuse and broken lives.

That being said, seeing American Idiot made me want to go out and buy the album. The sheer brilliance of Green Day’s music, its emotional depth, its versatility and brutal message, appear onstage without the advantage of solitude, and still shines through the chaos of the book and story.

Running Time:  is just under 2 hours with no intermission.

American Idiot is playing at the National Theatre in Washington, DC through February 23, 2014. More information can be found online.