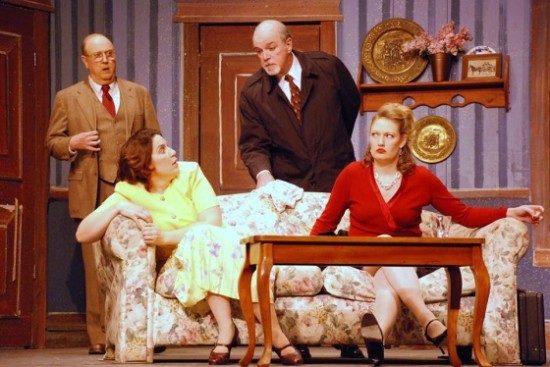 Ray Cooney’s Funny Money at The Bowie Playhouse is an entertaining night out. At 2nd Star Productions this British Comedy comes to life as the hilarious twists and turns of the plot keep the audience and the characters on their feet. From loaded guns to loaded people, from injury to incest,  there certainly isn’t a dull moment in director Fred Nelson’s production of Funny Money.

The Bawdy farce follows Henry Perkins, played by Gene Valendo, an everyday humdrum man, through his increasingly immoral journey after accidentally obtaining a briefcase filled with 1,735,000 pounds. Henry decides to keep the money and run away with his wife, Jean (Mary Wakefield), to Barcelona. Unfortunately, before he can convince his wife to hop a plane with him, two detectives arrive at his home. What happens next can’t be described; let’s just say it involves multiple identities, bribery, and implied sexual deviancy.

The set designer Jane Wingard provided a perfect backdrop to the bizarre circumstances. A lush, middle class living room, which I would describe as cozy but boring–the sort of home you could walk into on a friday night and find a pot of tea, a knitter, and a man reading the paper and harrumphing. This set brought out the ridiculousness of the situation these characters found themselves in, avoiding gangsters and lying to police. 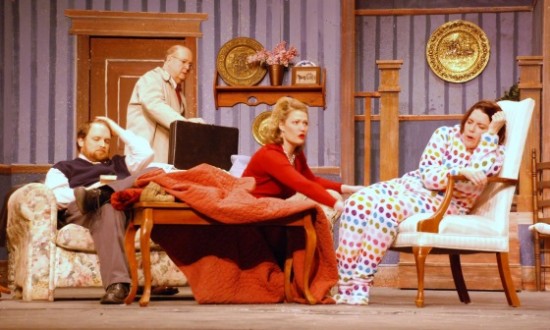 Mary Wakefield, as the wife Jean, accomplishes the role of a nervous homebody who “liked her husband better as a wimp.” At times her increasingly loud hysterics were a little over dramatic but once she switched into her role of comic drunk in her colorful onesie her sloshiness was quite amusing.

My favorite performance was by John Wakefield as Vic, the friend of Henry and Jean who was planning on coming over for a nice Birthday dinner. Instead, he found himself playing the role of Australian Brother in law, who owns a sheep farm and has increasingly bizarre sexual tendencies. He follows the roles he is given by Henry pleasantly enough, although with a lot of confusion and occasional missteps on his characters part.

The advantageously minded Detective Davenport (Michael N. Dunlop) was an asset to the team. His comedic timing was excellent. Valendo as Henry managed to keep all the character switches and comedy routines straight. Samantha Feikema as Betty and Zak Zeeks as Bill successfully played their roles but didn’t add much flourish to the comedy.

Robert Eversberg as Detective Slater convincingly played the ignorant but well-meaning chap who faltered a little when attempting outrage after his numerous frustrated dealings with the bizarre happenings.

All-in-all I recommend Funny Money if you find yourself looking for ridiculously good fun with a murder plot, a screeching woman, and an ensemble that comes together nicely.

Helen Gushue is a DC native, and graduate of Guilford college in North Carolina where she earned her degree in Music performance. She's an arts lover who has worked as an educator in various fields and believes whole-heartedly in arts education. She is pursuing a career in or surrounding world music and education.