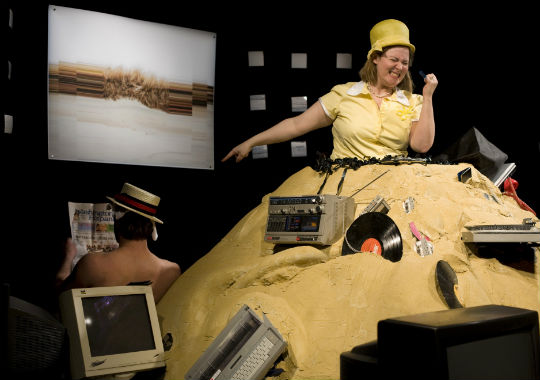 Cultural DC’s production of Samuel Beckett’s Happy Days rings with youthful enthusiasm and skillful craftsman(woman)ship.  Karen Lange’s Winnie engages with verve despite being encased inside her mountain of sand, and Christian Sullivan’s all-but-not-there Willie makes his presence known with grunts, simple statements, and a final failed crawl to freedom (or love).

Of course, a quizzical “yet” might accompany any Becket script; as Beckett, made famous with his play where “nothing” happens twice, begs you to find meaning in the nothingness with which he fills the empty space and which we supposedly fill our empty lives.

Just as four leaves signify the shifting climate between acts in Waiting for Godot, so in Happy Days, Beckett–deciding perhaps to be a little more obvious with his signifiers–begins Act 2 having poor Winnie buried no longer up to her waist in sand but up to her head.

Director Jess Jung has littered the pile with the fruits of our electronic age, from cell phones to computers all lying partially obscured by sand.  When Winnie utters her refrain “in the old style” we are left to wonder if, in this perhaps apocalyptic vision of humanity (Winnie signifying thus), “the old style” is represented by those electronic devices.

Jung wants us to think otherwise; in her director’s notes, she tells us that Winnie loves typewriters not computers and, thus, is buried in a world and an age she has refused to accept–the Electronic Age.

Perhaps, a look of fear or disgust at the artifacts cluttering her immediate surroundings would have been apropos to that desired effect.

Winnie has been costumed by designer Joni Yost in an “old style” yellow dress, a signifier of that 1950s time period she and her husband refuse to abandon (he still reads a hard copy of the newspaper and wears a top hat in Act II).

To be sure, Lange does a great job dealing with her challenge.  Her voice is clear; her every gesture and facial expression, exact.  Her energy youthful and engaging.

What the production lacks, however, either by design or by oversight, is the utter solitude and possible “silence” Winnie faces.  No question, she is a talker, but she talks as a way of overcoming the desperate fear she has of being alone.

With youthful exuberance replacing middle-aged reserve, the joy of talking (and being heard) is performed for its own sake and not to fulfill a larger objective.  As a result, Happy Days becomes a play with a different nature, which is not necessarily a bad thing.

Jung wants us to see Winnie not as a representative of humanity, but as the representative of a person who refuses to get with the program.  She is isolated not because that is our essential condition as human beings, but because she does not accept where the world has taken her: she will not use an i-phone.

As I ponder my old flip phone, old and slow as it is, I am left to wonder.  Would I feel more wonderful and part of this new hip generation if only I would buy an i-phone and start texting and tweeting and sending selfies to my friends?

Happy Days, the script, is definitely Beckett’s happiest play.  Its happiness, however, emanates from Winnie’s delusions.

If nothing else is true, Act 3 would begin with the sand covering her head entirely: she might still be talking but the sand would definitely muffle her voice.

Come to think of it, at that point an i-phone and a willingness to tweet might really come in handy.