Theatre Review: ‘How to Succeed in Business Without Really Trying’ at Olney Theatre Center 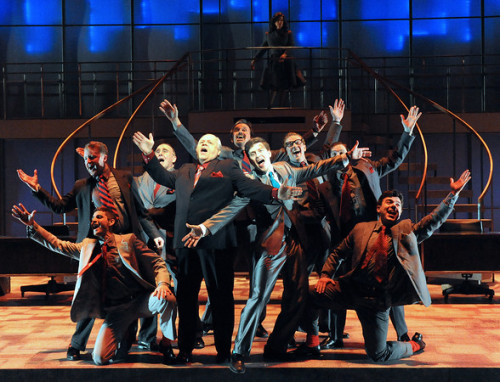 The cast of “How to Succeed in Business Without Really Trying’ at the Olney Theatre Center. Photo by Stan Barough.

I don’t think anyone wants to return to the time when the workplace was rife with sexism and sexual harassment was a normal occurrence.  Nor does anyone want to see a business setting where the only upward mobility for a woman is limited to being a secretary to the highest male executive in the corporate hierarchy.

But the hilarious musical How to Succeed in Business Without Really Trying currently playing at the Olney Theatre Center takes us to that place in the early 1960’s, and for nearly three hours, we can laugh aloud and appreciate the fact the era is relegated to the dustbin of history.  While those sexist days may be gone in most places, the office in-fighting, politics, back-biting and ruthlessness cloaked in ambition, as exhibited in the show’s fictional New York City-based Worldwide Wicket Company, alas, remains in the real world even today.

How to Succeed in Business Without Really Trying is a musical by Frank Loesser with a superb book by Abe Burrows, Jack Weinstock and Willie Gilbert that is based on Shepherd Meade’s bestselling book with the same title.  The show opened on Broadway in 1961 and the next year captured seven Tony Awards including Best Musical.  The success of the show spawned winning revivals in 1995 and 2011 and a film adaptation in 1967.

The plot chronicles a rags-to-riches story of young J. Pierrepont Finch who was a window washer but while working reads the book, “How to Succeed in Business Without Really Trying.” Through conniving, guile, charm and blasts of good luck, Finch climbs the corporate ladder at Worldwide Wicket to greater heights than the building’s windows he cleans.

Jason Loewith, completing his first year as the Olney Theatre’s Artistic Director helmed the spirited production that kicked off the venerable theatre’s 76th season.  This show marks the first musical Mr. Loewith directed, but you’d never know that the way it was expertly woven together.   Under the guiding hand of Mr. Loewith, the production is Broadway caliber in every respect.  It succeeds for sure, but the creative team and performers tried and tried hard, contrary to the show’s title.

Under the guiding hand of Mr. Loewith, the production is Broadway caliber in every respect…This is an extraordinary show that should not be missed.

This cast is led by Sam Ludwig in the role of Finch, the central character.  As he peruses that book, which offers guidance on advancing in business and is narrated by none other than Sir Ian McKellen, Finch devises schemes and resorts to good old-fashioned sucking up to executives and even flattering the president’s secretary.  While people may cringe, and at the same time laugh, over his obvious tactics, Finch is so likable and charming and his enemy Bud Frump (Dan Van Why) is so despicable, that the audience is pulling for him to succeed.

Mr. Ludwig’s comedic execution is sharp, and his excellent vocals are well displayed in “Company Way,” “Rosemary” and the hilarious duet “Grand Old Ivy” with Lawrence Redmond as J.B. Biggley, the president of Worldwide Wicket.  He also can dance quite competently, as evidenced in one the show’s top numbers “Brotherhood of Man.”

Actors playing Finch in previous Broadway iterations of How to Succeed…included Tony Award winners Robert Morse and Matthew Broderick as well as Daniel Radcliffe, Darren Criss and Nick Jonas.  Without trying to sound hyperbolic, it’s hard to imagine that Mr. Ludwig could have been outplayed by these performers; he was perfectly cast for the role.

Finch’s foil throughout his attempts to ascend through the company is Bud Frump, played mischievously by Dan Van Why.  Arrogant and lazy, Frump, who is the nephew of Biggley and the only reason he has a job with Worldwide Wicket, is obsessed with stopping Finch at every turn.  Each gambit, each vengeful act Frump employs to thwart Finch backfires to the delight of the audience.  Mr. Van Why plays the role to the hilt using his comedic skills and body language. He performs well in maintaining that loathsome character in such songs as the clever group songs “Coffee Break,” and “Been a Long Day.”

Veteran actor Lawrence Redmond as the company’s president is also top-notch.  Authoritative when he needs to be, vulnerable in his dealings with his mistress Hedy (Colleen Hayes) and kind to Finch, Mr. Redmond handles the role expertly.  Demonstrating a competent singing voice, Mr. Redmond’s duet with Mr. Ludwig in “Grand Old Ivy” is a highlight number with the uproarious dance moves making it work perfectly.

On the female side of the company, the performers also excel.  Rosemary Pilkington played wonderfully by Angela Miller, targeted Finch from the outset as a love interest.  Finding him to be elusive from the beginning, she remains loyal to him throughout his travails, and she ultimately succeeds.

Ms. Miller exhibits superb vocal prowess throughout the show.  “Happy to Keep His Dinner Warm” is beautifully sung.  “Paris Original” is a classically funny group number whereby Rosemary ties to impress Finch with an original dress at a reception, and to her horror all the other women show up wearing the same dress.  And the duet with Mr. Ludwig in “Rosemary” is also strong.

Colleen Hayes as Hedy La Rue, turns in a glorious performance.  Playing the role of a stereotypical blonde air-head who is Biggley’s mistress, Ms. Hayes demonstrates exceptional dialect and timing.  Her mere presence attracts gawks from the male characters and laughs from the audience.  Ms. Hayes’ duet with Mr. Redmond, “Love From a Heart of Gold,” is tender.

Sherri L. Edelen as Miss Jones, Biggley’s secretary, was also sharp.  After being flattered by Finch when he handed her a rose that Rosemary had given him, she immediately became his ally in his quest for advancement.  Ms. Edelen is in fine voice in the dance number “A Secretary is Not a Toy” and in the excellent song “Brotherhood of Man.”

The remainder of the cast is superb in supporting the leads.  Kurt Boehm as Mr. Gatch/Mr. Peterson, Chris Rudy as Mr. Tackaberry, George Dvorsky as Mr. Bratt, Harry A. Winter as Mr. Twimble/Wally Womper and Aileen Goldberg as Rosemary’s best friend Smitty are notable.

The staging is crisp and well-paced.  Costumed appropriately in typical 1960’s business suits and colorful dresses, the cast moved about smoothly with one of the entrances/exits being a tunnel down from the front of the stage into the orchestra section.  For its part, Mr. Youstra’s splendid nine-piece orchestra is located beneath a simulated subway grate complete with a manhole—a very clever construction.

Mr. Dardenne’s set is solid in its functionality.  Basically, it consists of a glass and metallic structure to simulate a prototypical office setting or the mailroom with two spiral staircases leading up to a second level to depict another office corridor.  Four desks are used interchangeably to represent individual workspaces or a conference table.  The scenery is simplistic and never gets in the way of the performers.

The lighting design by Joel Moritz adds more to the fun as each time Finch had a thought that would serve him well in his quest, a light flashes on him at the same time a ping is heard.  It’s another clever device, and it’s not overused.

This production of How to Succeed…can stand up with any in terms of direction, performances and technical expertise.  If you don’t wince at the now unacceptable behavior of male executives back in that era, you will cheer for J. Pierrepont Finch as he lives the American Dream, without even trying.  This is an extraordinary show that should not be missed.

Running Time: Two hours and 47 minutes with an intermission.