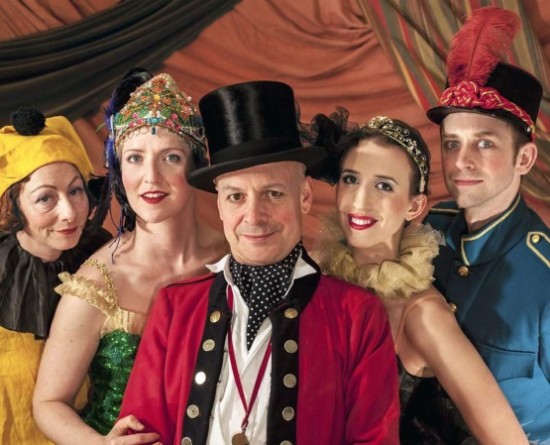 The cast of Impossible. Photo courtesy of Happenstance Theatre.

The circus today has morphed in a couple of directions: to the streamlined arena fare of Ringling Brothers and Barnum & Bailey and the gymnastic spectacles of Cirque du Soleil and their imitators.  Impossible! the latest offering from Happenstance Theatre picks up on the circus back in a Depression era, when a big top in town and its assorted magic meant a temporary brightening on what might otherwise be a bleak landscape.  It’s almost too fitting for the troupe, who already look like time-travelers from the 1930s, adjusting their comic skills and rubbery faces from silent one-reelers to talkies.

Mark Jaster looks at home in a top hat or bowler; Sabrina Mandell impossible to imagine in hairstyles or dress that isn’t vintage. To these considerable talents, they’ve got a younger troupe that has followed them into classic, broad theater that stops just short of pantomime.

Billed as “a theatrical collage collaboratively devised by ensemble,” Impossible! includes a number of vignettes that shift from big top and sideshow attractions to more poignant rural reveries celebrating the workaday backstage life of so many interesting traveling performers.  It’s an odd combination of exacting and beautifully coordinated set and costumes by the Helen Hayes nominee Mandell, along with key missing objects that edge the performances closer to mime.

In Sarah Olmsted Thomas’ opening tightrope act, she’s minus the tightrope, for example. It’s an illusion that succeeds from Kris Thompson’s gradual underlighting of her moves, as if she were high in the big top.

Then Jaster and Mandell become a knife-throwing couple, sans knives. 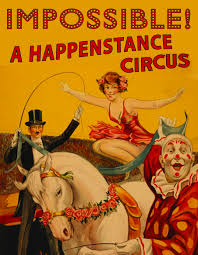 Alex Vernon takes a big step forward in the troupe, not just by wearing stilts later on. First he’s the passerby who is lured into the tent by his own shadow, in a brilliantly conceived opening scene, and then the manic “escapologists” who can’t quite free himself from his locked straight jacket as the waters rise (to the horror of his assistant, played by Thomas).

Gwen Grastorf, a lovely presence, takes on the funny fire act, while singing “I Don’t Want to Set the World on Fire.”

Before the show’s end they’ve covered bits you’ll guess they mastered long ago – from the two person mirror illusion to the slow motion pie fight.

There is no shortage funny sight gags in the sideshow parade, from Vernon’s rubber man to Thomas’ impossibly twisted human pretzel.

But the artistry really takes off when Jaster appears as a number of creatures in an animal act. He somehow makes his legs seem shorter when he appears as a chimp; then he’s majestic and a little embarrassed about doing tricks as a horse; the lion is snarling and bored.

All of these acts are enhanced by the music of the multitalented Karen Hansen, who plays so many vintage instruments, she’s often playing two at once, from pump organ to trombone, banjo, fiddle or guitar. Her musical washes are as essential as Mandel’s designs to set the old timey feel. Others join her on ukuleles for one neat number; they go a cappella for another neat number.  But Jaster also gets to play musical saw; Thomas strolls by with her own accordion number.

Sometimes the giddiness of the humor seems too much a contrast to the melancholy of the behind the scenes glimpses. But they are both done so well, you wish Happenstance would spend a little more time stitching them together with a strong narrative throughout to make one big production. Then they would have something huge.

Now, Impossible! is merely great. And that’s not too bad at all.

The Happenstance Theatre production of Impossible! A Happenstance Circus continues through Feb. 9 at the Round House Theatre, 8641 Colesville Road, Silver Spring, MD. Tickets are available here.