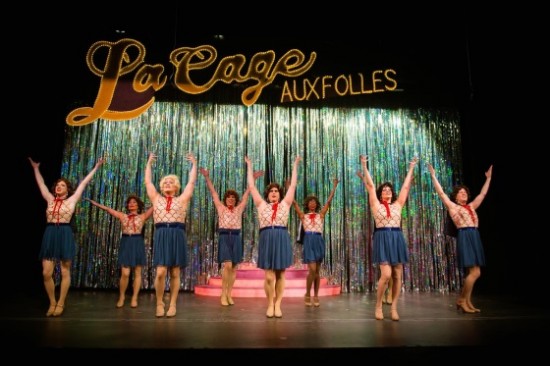 The McLean Community Players presentation of La Cage Aux Folles is nothing short of fantastic.  The talent is extraordinary, costumes dazzling, and the set beautifully designed.  The show’s perfect mix of drama, romance, and comedy come together for a truly enjoyable theatrical experience.

… delivered with great taste and charm.

La Cage Aux Folles is based upon Jean Poiers 1973 play also entitled La Cage Aux Folles.  It is a story about love, family, acceptance, and being true to oneself.  The story is that of a gay couple (Georges and Albin) who live on the French Riviera. Georges is the owner of a night club featuring drag queen cabaret style entertainment, while his partner, Albin, performs as the club’s leading “lady” star entertainer. The couple raised Georges heterosexual son (Jean-Michel) and he desires to marry a girl (Anne) from a very conservative family.   Since the show’s Broadway debut in 1983, La Cage Aux Folles has won many Tony awards and captured the hearts of audiences worldwide.

Act one began with an uplifting energetic performance by the “lady” cabaret singers and dancers. Singing “We Are What We Are.” The dresses in this scene were stunning.  The sparkles on the bold, bright colored dresses glistened beautifully in the spot light as the girls danced.  Costume designer Richard Battistelli could not have chosen better dresses to add a bit of over-the-top diva-like flare, elegance, and a feeling of happiness to the scene.

In contrast, the second scene of the show, starring leading “lady” Albin, is a bit more dramatic and emotional.  While singing “A little More Mascara” Albin exposes her insecurities about getting older and her fear of Georges being unfaithful. 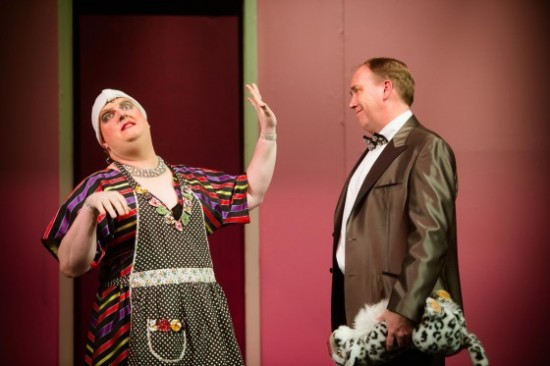 Actor/singer Christopher Furry stole the show with his performance as Albin.  His vocal competencies are incredible.  He sang with such clarity and never sang out of tune or missed a beat.  His skills as an actor brought the character of Albin to life.  Furry truly took charge and owned the role making the audience feel happy when he was happy and sad when he was sad.

The rest of the first act unfolds as Jean-Michel announces that he wants to marry Anne, the daughter of a very conservative politician, and that her family will be coming to meet their not so ordinary family.

Actor/singer Harv Lester played an outstanding role as supporting actor with his interpretation of Georges.  He captured the spirit of a troubled soul being torn between honoring his only son’s wishes and protecting the love of his life from feeling rejected and emotionally shattered.

Other songs performed during act one include “With Anne on My Arm,” “With You on my Arm,” “Song on the Sand,” and “I Am What I Am.”

The story comes full circle in act two.  The family must decide how they will handle the much dreaded visit from Anne’s family.  In act two we see a beautifully painted back drop of the French Riviera and the inside of “Chez Jacqueline’s Restaurant” where the two families have dinner after the butler, Jacob, burns the chicken intended for the evening meal.  The craftsmanship and attention to detail was appreciated as it brought a sense of authenticity to the scenes and made great use of stage space.  In addition, the simplicity of the set design and use of props made for practically seamless transitions from scene to scene.

The astounding performances by main characters such as Georges, Albin, and Jean-Michel were wonderful, but the show would not have been complete without the exceptional talent displayed in the supporting cast.  The butler, played by Taurean Barber, was absolutely hilarious and spoke in a very convincing French accent.  The supporting cast along with main characters sang and danced to songs such as “The Best of Times,” “Masculinity,” and “Cocktail Counterpoint.”

Through it all love prevails and there is a happy ending to this story.  It is a show that embraces acceptance, love, family, and friendship; and, although the show deals with adult issues surrounding sexuality and societal acceptance, the producers and director masterfully created a show that was delivered with great taste and charm.

Advisory: Adult themes. Recommended for ages 16 and up.