Theatre Review: ‘Mother Courage and her Children’ at Arena Stage, the Mead Center for American Theatre 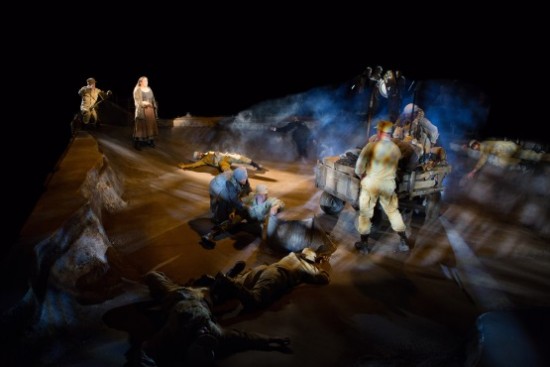 First of all, Bertolt Brecht is a master playwright, the likes of which come along only rarely in the theatre.  His Mother Courage and her Children is one of the great scripts of the 20th century, defining a century of bloody war that threatens the 21st with even greater catastrophe.

Secondly, Arena Stage and Molly Smith’s production of the classic is fabulous, capturing not only  the play’s deep humanity, but its rich, ironic humor as well.  Its visuals linger long in the imagination, and the questions it provokes do not fade.

Thirdly, Kathleen Turner as Mother Courage, the tough-as-daggers street vendor who survives on cunning and grit, reveals a depth and breadth of acting seldom seen on DC stages.  Beneath her survivor’s facade lurks a vulnerable mother of three who will do anything to protect her offspring. 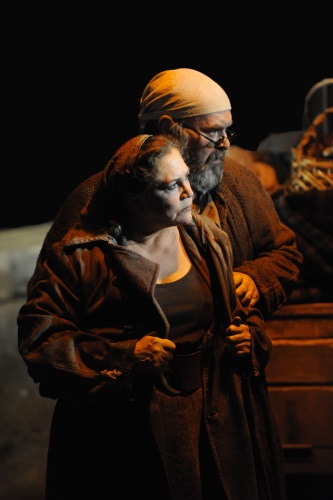 Kathleen Turner as Mother Courage and Jack Willis as the Cook. Photo by Stan Barouh.

Mother Courage rages with humor, pathos, and song.  If you have a chance to see it, do not miss the opportunity.

The story of Mother Courage is rooted in dramatic narrative, a signature of Brecht and his collaborators’ style, with songs that advance the plot while revealing the essence of a scene or character.  Covering more than a decade of war, Courage and her cart travel through Europe selling food and wares to war ravaged Europeans.  As she travels, her children disappear one by one into the fog of war.

What makes the play such a work of genius, however, are the overlays of irony that plot and dialogue offer us.  Courage makes her money off war and its horrors; yet, her primary objective is to protect her children from that war.  Courage can go on living only because she thinks that at least one of her children will survive the bloody thirty-year war (ironically, President George W. Bush gave the number 30 to how long the “war against terrorism” would last–we’re at 13 and counting).

Smith and her production team has done a wonderful job creating a visual representation of the harsh, environmentally bleak world of Mother Courage.  Set designer Todd Rosenthal has plopped us down in what looks like the mountains of Afghanistan.  Lights by Nancy Schertier do a marvelous job highlighting the text and keeping the audience focused on the play’s wide ranging action.

Cannons, by sound designer Roc Lee, pound away as the lights come up and Courage enters, with her cart.  Her horse has died so her two sons haul her in ox-like upon her royal throne.  Her daughter sits beside her.  A band of musicians follow: accordion, horn, drum.

These musicians and characters create an essential tapestry for the show.  Led by music coordinator Nathan Koci, the ensemble of Monalisa Arias, Lise Bruneau, Jed Feder, Rayanne Gonzales, Jacobi Howard, Dan Istrate, James Konicek, Jesse Terrill, and John Leslie Wolfe not only provide the musical accompaniment for the production’s eleven songs, but they also embody a host of characters portraying a multiplicity of situations as unique as they are dramatic; and they do so with a gritty authenticity that allows the audience to enter their world if for a moment, before necessarily withdrawing from the carnage.

Rodriguez’s Eilif is all bravado and brawn.  In the opening scene when a recruiting officer, played delightfully by Jacobi Howard, machos Eilif into joining the military, we cannot help but think of all the young men and women who today join the military.  The beauty of a Brecht’s script is that is does not pull its punch: the perspective is clear, and that perspective challenges you to defend its opposite.  In Brecht’s world the men and women who enter the battlefield are little more than cannon fodder in a larger drama played out by the rich and powerful.  And the motive is money.

…rages with humor, pathos, and song.

Nehal Joshi plays the honest, “un-clever” son, Swiss Cheese, and he does so without demeaning the character’s simplistic mindset.  He is determined to do the right thing, which in a time of war (which is pretty much always) is not a good thing, for the doer.

Kattrin is Courage’s daughter, and as played by Erin Weaver she embodies longing.  Injured early in the war, Kattrin cannot speak, only grunt.  Weaver masterfully brings the young woman’s passion for peace and possibilities to the stage. 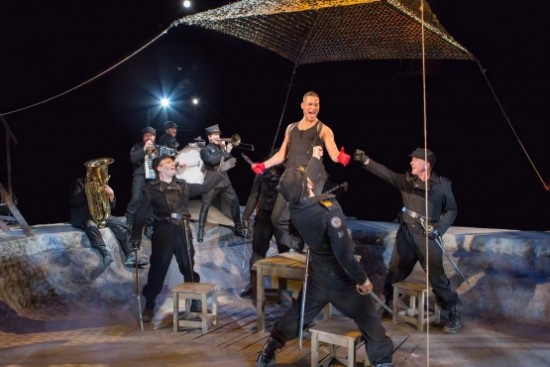 Nicholas Rodriguez (center) and the cast. Photo by Teresa Wood.

Another survivor in Mother Courage’s world is the young prostitute Yvette.  Meg Gillentine captures the young woman’s desperation to the letter, and her song “Each Night in May” is a show stopper.  When she returns later in the script a successful woman of the world, comedy sweeps the stage as she and Courage remember the old days–none too fondly.

The two love interests in the play are the chaplain, played by Rick Foucheux, and the cook, played by Jack Willis.  Do not misunderstand me, however, “love interest” only misleads in a world of war and death, except in the sense where practical self-interest reigns.

Foucheux’s chaplain is a marvelous combination of holy spitfire and narcissism, and in the scene where he woos the unimpressed Courage, the house rocked with laughter.

Willis’ cook, on the other hand, is a “player” from way back; only he has seen better days–much better days.  When he and Courage first meet, haggling over the cost of a chicken, you know immediately that they were meant for each other.  The cook’s song, “Solomon’s Song (You’re Better Without)” could not have been funnier or more on point. 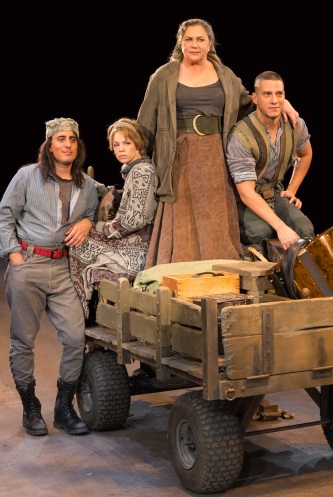 To be sure, costume designer Joseph P. Salasovich does an incredible job not only creating a multifaceted mosaic of hues and shapes with his hundreds of costumes, but his creations never become artificial, like the clothing of so many stage and film representations of poor people.  During Act II, Courage’s business prospers mightily.  Salasovich gives her a shawl as queen-like as it appears hand-stitched.  The effect was grand.

And that authenticity is the defining feature of Arena’s Mother Courage, a quality only enhanced by Anne Nesmith’s wigs and by James Sugg who composed and supervised the music.  The production’s musical overlay never jarred the audience or took them away from the theatrical event they witnessed.  The sounds we heard might have sounded on any battlefield where music (supposedly the food of love) must be played.

Now do not attend Mother Courage expecting to be swept into its action and transported emotionally from beginning to end.  That will not happen.

The epic Mother Courage presents you with is a world as foreign to most Americans as those previously mentioned battlefields of Afghanistan.  Thus, you witness the events of the play in much the same way a historian might analyze history.  At moments you will empathize with the characters, but in the end you will resist empathy at all cost.

You will want more than anything not to be these people, for these people compromise their ideals, abandon their principles, sacrifice their children all for some distant dream of peace and prosperity.  These people do not do the right “thing.”  They do the necessary “thing,” and that “thing” is all about, at best survival of them or their clan, but more likely prosperity and wealth for them and theirs.

And it does not make any difference that, for most Americans today, our wars are honorable, necessary, and (for our soldiers) safer than they have ever been.  As we leave the theatre headed for our after dinner drinks and delicious hors d’oeuvres, we will wonder are those people me?  Are we related?

We will want to believe that when the chips supposedly fall, we will stand up, even if in doing so we will end with a hero’s fate.