Theatre Review: ‘Orphie and the Book of Heroes’ at The Kennedy Center’s Family Theater 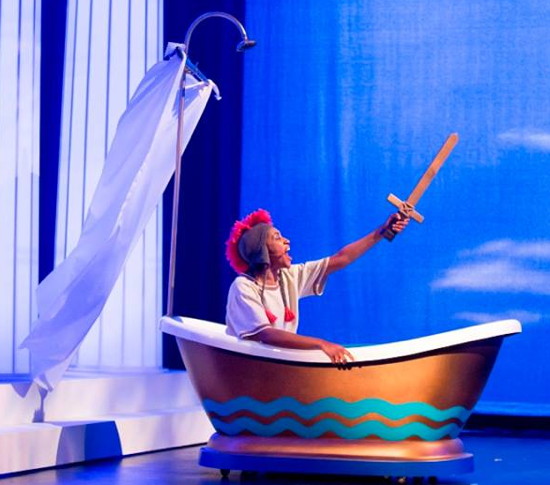 I remember a time when children’s shows featured large, beefy and, most of the time, dim men as the heroes of the story.  The prince swept in at the last minute to save the helpless princess, who was generally so useless that she couldn’t find her own way to the ball or would willingly accept food from a stranger so as not to be rude.  I am delighted to say that this tide has turned.  The Kennedy Center-commissioned Orphie and the Book of Heroes, in its World Premiere, creates a new definition of “hero” in a tidal wave of brilliant songs, humorous dialog and a whip-smart little girl who is not so little on the inside.

Orphie and the Book of Heroes takes place in ancient Greece in the time of Homer, the great storyteller of “The Odyssey” and “The Illiad.”  Homer is guardian to Orphie, a young girl who recently lost both her parents and who loves to hear and act out the stories of the great Greek heroes.  With a wooden sword at her side and visions of her personal hero, Heracles, she never backs down from a fight.  But when some mean boys taunt her to name one hero who is a little girl, Orphie begins to doubt her bravery.  She rushes home to ask Homer if he knows of such a story.

The entire talented cast … were a joy to watch.

Orphie returns home to find Homer gone, kidnapped by the King of the Underworld, Hades.  She doubts she is big enough and strong enough to rescue Homer herself, so she decides to travel to Mount Olympus, the home of all the Greek Gods, to ask for aid in her quest.  Along the way, she meets a few Gods and persists through some demanding tasks, and ultimately she finds that she doesn’t need to look outside of herself to find all the qualities of a true hero. 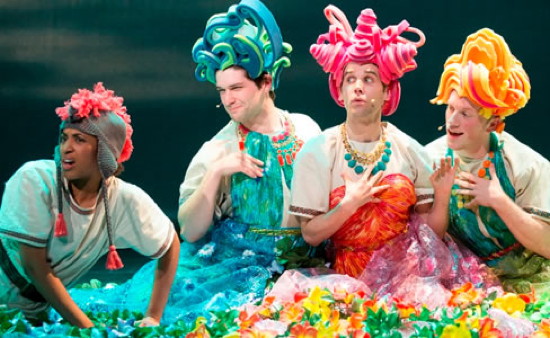 Joe Calarco’s directing is wonderful, and the book and lyrics by Christopher Dimond are especially well done.  The script is funny, poignant and infused with a strong moral, all wrapped in a package that is both incredibly entertaining and educational.  The music by Michael Kooman enhances the mood and tone of the play perfectly and is toe-tapping worthy throughout.  The choreography by Karma Camp made wonderful use of Tony Cisek’s well-designed stage, and Timm Burrow’s costumes were perfect for the characters but also surprising and fun – Hermes is on roller skates!  The sound design, by Matt Rowe, and the lighting design, by Dan Covey, were perfection!  Everything came together for a seamless production.

Lauren Du Pree, a local and personal favorite, carried the show as Orphie without one dip in enthusiasm and energy, and her singing was consistently strong and beautiful.  Thomas Adrian Simpson was fantastic as Hades, clearly enjoying every minute and every laugh.  (And there were a lot of laughs.)  The entire talented cast, including Paul Scanlan, Gia Mora, Sam Edgerly, Evan Casey and Christopher Bloch, were a joy to watch.

As Homer said, “A small rock holds back a great wave.”  He must have seen Orphie coming from thousands of years ago, and I am extremely glad to meet her!  Please don’t miss this show!

Running Time:  Approximately one hour with no intermission.