Theatre Review: ‘Peter and the Starcatcher’ at the Kennedy Center 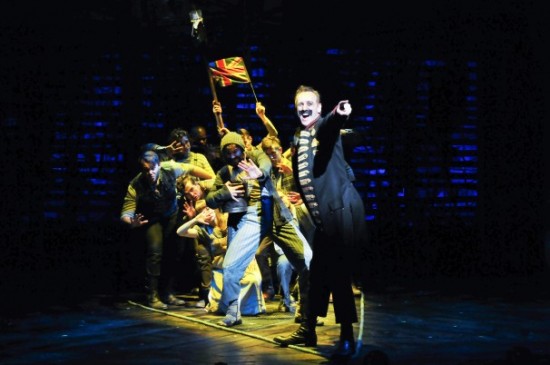 The company of ‘Peter and the Starcatcher.’ Photo by Jenny Anderson.

With the recent announcement that “Peter Pan” would be the next live musical for NBC this year, Bill Murray flying into David Letterman’s show in costume this week, and Leah Dunham sporting a pixie cut, it would seem the stars are aligned for another revival of  J.M. Barrie’s hundred year old story of a boy who wouldn’t grow up.

It also makes a perfect time for the equally adventurous, thoroughly creative prequel to hit town, with the national touring production of the Tony Award-winning Peter and the Starcatcher at the Kennedy Center.

Barrie’s Peter Pan is inherently theatrical; the lad had his first major showing in a 1904 stage play before he was turned into a book. The current play by Rick Elice is adapted from a series of books by Ridley Pearson and Dave Barry first published a decade ago that purport to tell the back story of not only how Peter Pan got his name, but how he got to Neverland, Wendy’s role in all of this, as well as the early life of some of the other characters in the tale, from a two-handed pre-Hook to a tickless Croc. 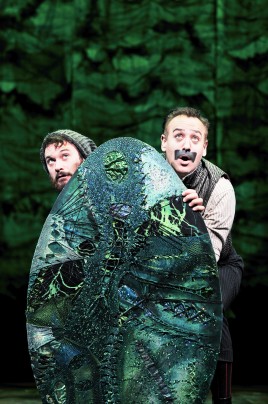 In this, the “Starcatcher” tale is as creative as Barrie’s, with batches of pirates, natives and mermaids, and amusing side-stories. The role of the humorist Barry, we suppose, is to add the funny gags to the end of speeches — some of them using contemporary references — or encourage some of the slapstick during the breakneck pacing.

Under a glittering and fanciful Victorian era proscenium arch, the story is played out like a bedtime tale, with the troupe of 12 actors saying exactly what will transpire. With one woman among them — the spirited and effective Megan Stern as Wendy — they are not quite as versatile as they could be, though Benjamin Schrader is a standout in his role as her nanny, Mrs. Bumbrake.

Starcatcher as storytelling is breathless, particularly in the first act, with actors emphatically stating their lines and rhymes and jokes, with one sometimes ending anothers’ sentence. It’s all expertly timed and comes in such a barrage that you almost wish they’d take a breath.

Staging Starcatcher, it turns out, really means staging, with the actors using bits around them to suggest some of the set, with a simple rope the most versatile — waving in patterns to replicate sea waves or held up at right angles to mark the circumference of a tiny prison cell. The characters, now pirates, now unfriendly natives, turn into doors or furniture as needed. Things happen quickly.

What’s occurring is the sendoff of two boats from England to a faraway land named Rundoon. One ship, the Wasp, carries a trunk full of precious star-stuff; the other, named Neverland, has a trunk full of sand and inhabitants who hope to switch the two.

Lord Aster accompanies the precious trunk aboard the Wasp, while Molly and her nanny travel on the Neverland, where they are immediately imprisoned. Also on board are three boys recently sold into slavery — lost boys, you might call them.

Pirates are also running Lord Aster’s boat; they kidnap him too. The main pirate there is the dramatic Black Stache, so named after his Groucho-style facial hair and manner. The two boats collide as a hurricane approaches. As a result, everyone is washed to an island as Act Two begins. 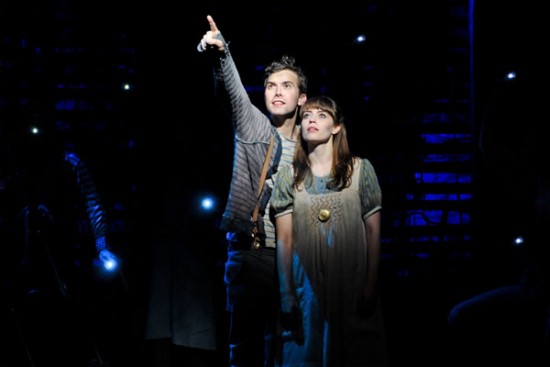 After the break, the colors and drama opens up much more than the monochromatic and frantic first act. Mermaids sing a song about their transformation, Peter (one of the boys who has found his name) wants to help Wendy get her real trunk,but its magical star-stuff has seeped out into a pool, where it’s not only made mermaids, but given Peter some powers as well.

A group of natives, whose language seems to consist of names for Italian pasta,  threaten them all until there is an odd coincidence. Also, the giant crocodile, Mr.Grin, gets bigger and bigger just before he gets his telltale ticker. Ropes again emulate the waves and also outline the monster. And Black Stache is on the verge of getting a new name when he accidentally and elaborately cuts off his hand.

Although it has a few ditties within it, Peter and the Starcatcher is not really a musical, like the familiar Mary Martin one. The intensity and fast-pace of Elice’s adaptation distinguish itself as something quite different.  Still, it’s fun to watch the two musicians, stuck out on poles like crow’s nests on each end of the stage, doing sound effects and backing tunes.

It is as well rehearsed and directed an ensemble as you’ll find, with the standout, besides Joey deBettencourt as Peter, and Stern’s Molly, chiefly John Sanders as the broadly entertaining Stache, whose hand-cutting sequence about as extravagant as they come (and seemingly tailored to the patience of the audience at hand, so to speak).

Nathan Hosner has the requisite stature of a Lord Aster; Luke Smith and Jimon Cole have their moments as Smee and Slank respectively. But the entire ensemble is so tight and interchangeable, it’s almost hard to pick them apart.

It’s clear from the touring production how Peter and the Starcatcher won its Tonys for Donyale Werle’s scenic design, Paloma Young’s costume design, Jeff Croiter’s lighting design and Darron West’s sound design.  It is so exactingly directed that it’s no wonder it took two in that role, Roger Rees and Alex Timbers.

Because the giddy production is a prequel, it’s no spoiler that it ends with Peter poised, crowing, and about to take his first flight. He’d better step on it; Bill Murray is already doing circles around theater ceilings in costume: another guy who won’t grow up.

Running Time: Two and a half hours including a 20-minute intermission.

Advisory: Said to be “suitable for younger audiences, but most enjoyable for ages 10 and up.”