In the 1920s, the founder of French Surrealism, André Breton, famously said: “The purest surrealist act is walking into a crowd with a loaded gun and firing into it randomly.” Unfortunately, such aesthetically imagined acts have become all too commonplace in our society today and, although one can question the complete randomness of contemporary mass killings, one cannot question the recurrence of the terrifying shock and disbelief when each mass killing takes place.

In his new play, Pluto, at Forum Theatre Steve Yockey borrows much from the French Surrealists.  Not only does its topic come straight from the morning headlines and Breton’s prophetic manifesto statement, but its style attacks the audience with a fierce combination of kitchen realism and Jean Cocteau’s off-the-wall conflation of dream and daily life. 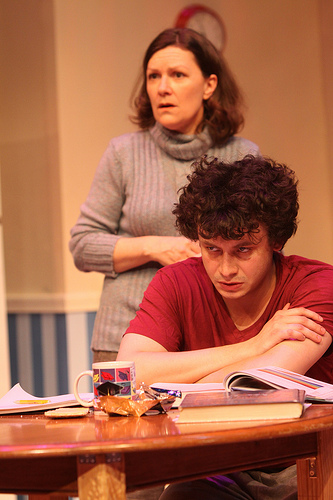 In Cocteau’s play Orphee, the famed lyricist gets his texts from a divinely inspired horse.  In Yockey’s Pluto the Miller family has a visiting three-headed dog, Cerebus, that has her own connections to other worldly realms.

In Cocteau’s play, Death, a beautiful woman with two insipid helpers and strange instruments, passes through a mirror to retrieve Eurydice.  In Yockey, Death enters with no less fanfair and equally strange and inspired devices.

The Miller family consists of single mom Elizabeth (Jennifer Mendenhall) and lone son Bailey (Mark Halpern). Cerebus (Kimberly Gilbert) sits in the corner under an upside down tree.  Maxine, a longtime “friend” of Bailey (Brynn Tucker), pays a visit.  Then, of course, there is Death (David Zimmerman).

The play opens with Bailey entering the kitchen setting his backpack down and laughing uncontrollably.   The dog watches from the corner.

After Bailey retreats to the basement, Maxine enters, checks the pack, the basement door, the dog; then she exits.

The audience begins to wonder: what’s up with this?  It will not be the first time the audience is left to ponder the meaning of events.

Mendenhall does a wonderful job capturing Mom’s denial of the uniqueness of the day’s happenings.  More than anything she wants this day to be like any other day.  Whether experiencing earthquake-like events or talking to three-headed dogs she attempts to go about her business as the long suffering mother of a less than exemplary son.

Halpern’s Bailey is in many ways an Every-Low-Achieving-Young-Man.  He does not communicate much with his mother; he does not have many friends; and he is not very bright: so he cannot bury his loneliness in his learning.  Not until later in the play do we experience the Bailey capable of killing.

Gilbert embodies the quirky Cerebus with a disturbing combination of sweet and assertiveness.  Her Cerebus might not have much of a bite, but she definitely has a bark.

By far the most engaging character is Tucker’s Maxine.  She comes on with emphatic strides and proceeds to torment all whom she encounters.  Ironically, she more than any character in the tale has a killer-like persona.

Zimmerman’s Death has all the slick of a new age used car salesman. Only his tendency to quote scripture elevates him to underworldly status. 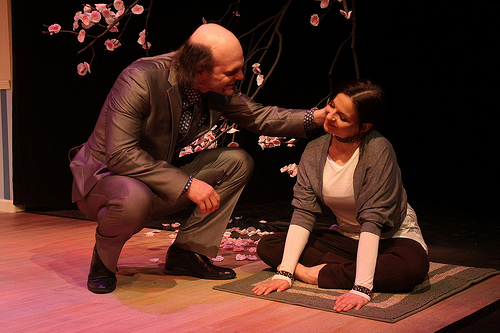 Dove’s production team decided to keep the scenography relatively straightforward and the supernatural elements low key.  Scenic designer John Bowhers’s kitchen smacks of middle America, except of course for that wonderful blooming upside down cherry tree.  Frank Labovitz’s costumes were contemporary, except of course for Death who, after stepping in from the deep deep sea, seemingly sparkled with radiance.

One can, of course, wonder why Cerebus was so understated.  Three-headed dogs do not appear on stage that often, and the temptation to go “real”, which in this case would have meant three-headed, would have been palpable.

Katie McCreary’s lights and Thomas Sowers’s sound captured the eerie qualities of this concatenation of life and death, again without hyperbole.

To Dove’s credit and to Yockey’s expertise, Pluto’s exploration of the socially estranged, homicidal young male remains authentic despite its surrealistic approach, which is no small feat.  As the script zig-zags toward its gruesome conclusion, revealing little by little its painful underbelly with each zig and each zag, the audience, held aesthetically distant by its stylistic tropes, suddenly finds itself squarely in the midst of a psychotic break.

Any audience member might wonder, as I most certainly did: do such horrible phenomena as mass killings erupt out of so seemingly everyday estrangements? Such wonderment is clearly what the play intends to provoke and, by the way, what Breton’s Surrealist Manifesto charged art to do.

If everyday dysfunctions are signs of a possible mass killer, then we are truly walking on pins and needles each every day.

With Pluto we are not emotionally purged, nor left to hope that “something good must come of this tragedy.”  Rather, just as our understanding of the solar system took a hit when our favorite planet Pluto lost its status and reduced our planetary tribe from nine to eight, so does our understanding of ourselves take a hit when our seemingly commonplace societal norms erupt into extraordinarily homicidal events.

Perhaps, mass killings will become our universe; or, perhaps, we will revisit our accepted criteria for human interaction, revise it, and make everyone a little less estranged.  We can only hope.

Running Time: 100 minutes without an intermission