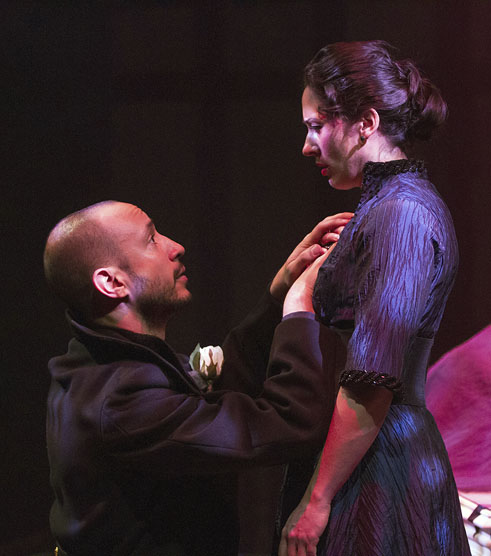 For Shakespeare’s Richard III, one of the playwright’s earliest history plays, the Folger Theatre has transformed itself.  Always an intimate space for the Bard, now the Folger draws its audience in even closer—a drop of sweat close, or a flash of a grin barely visible close, or an in-your-face-I-dare-you close.

For Richard III we are in the round, and we have never been so near to so many murders in our lives.

Shakespeare has never shied away from homicide, and his sensibility would be right at home in today’s Hollywood.  Although Titus Andronicus might have more death per capita than Richard, Richard beats them all for the pure pleasure taken in cutting off a head or smothering a young boy or poisoning an intimate other.

And in Folger’s vision of the play that hedonism takes on sadistic dimensions, as Richard’s quest for the throne of England takes on a pathological paranoia.

Drew Cortese plays the title role of Richard III.  Those who know the young actor from the superlative job he did last year in Studio Theatre’s Motherf**** with the Hat will be thoroughly impressed with his sweet villainous hero here.  Yes, his Richard gets schoolgirls eating out of his hand, or suspicious citizens swallowing another crock of deceit and treachery with a smile on their collective faces. 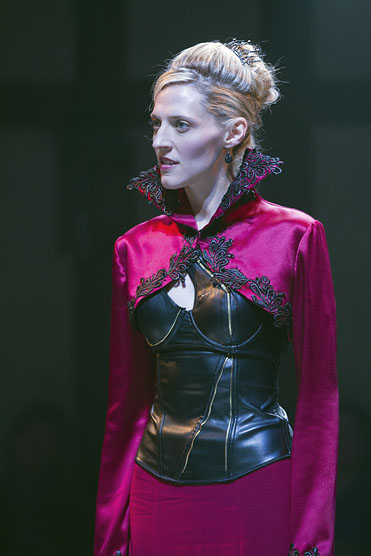 Folger’s production really is Richard’s, as Director Robert Richmond has pared away much of the complicating plot to focus our attention instead solely on the psychological gyrations of Richard, the last of the Plantagenet clan.  Part political aspirant able and willing to do whatever one needs to do to fulfill his political ambitions, part homicidal sociopath unable to empathize with any living creature, and part passive-aggressive wimp, capable of being bullied by school boys and women, Cortese’s Richard remains lovably sick as we watch him manipulate victim after victim with his pretty boy charm.

And it is this charm that allows Richard, despite his physical affliction, to win over even the most determined of enemies.

Number 1 among them is Lady Anne, played with a spitfire disdain by Alyssa Wilmoth Keegan.  In a scene not even the most audacious Scandal episode would attempt, we watch in amazement as Richard convinces Anne, despite the fact that she hates him for murdering her husband, that he really loves her and wants to be her husband.  “How is this possible?” we ask ourselves, before answering, “That’s how!  Do what Richard did.”

That psychic vulnerability is constantly on display throughout this Richard III, and it crops up in the most unusual of places.  Richard’s brother Clarence, played by Michael Sharon, is perhaps the most decent of men in the entire story, and Sharon does a superb job giving us that decency and then allowing us to watch as it is betrayed by Richard.

King Edward IV is equally vulnerable to delusions.  Played with wonderful whimsy by Paul Morella, this King would make Neville Chamberlain look like a tough guy.  Not only is he subject to apprentice sorcery but, in a delightfully silly court scene, he calls for an end to all the backstabbing by having all the “bad” people kiss and make up.  Of course, all his subjects do as he commands, albeit with clever smirks on their lips.

Even those who ally themselves with Richard suffer the indignity of a gruesome coldblooded murder.  Sean Fri plays the fence-sitting Hastings with careful discretion; yet, as Act I ends his head is all that remains.  Then, we have Richard’s chief accomplice in crime, Lord Buckingham, played by Howard W. Overshown.  When he and Richard are horsing around on stage, plotting their next beheading, sparks and chuckles fly.  Unfortunately, for Buckingham, the twinkle of conscience that remains in his bloodied brow alerts the King to his possible treachery and, thus, to his necessary fate.

On the other hand, not all the characters are so easily flummoxed by Richard’s manipulations.

Naomi Jacobson plays the hell fury Queen Margaret, turned witch after her exile following the murder of her husband, Henry VI. Her curses are indeed a source of eternal inspiration. 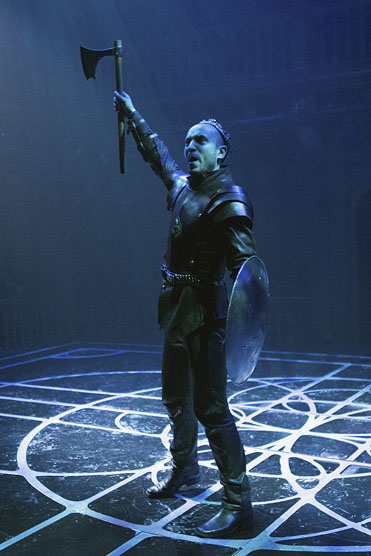 In a reversal of sorts, when Richard propositions Queen Elizabeth to woo her young daughter on his behalf, the Queen (played with sly ambition by sinewy Julia Motyka) turns on him. Doing her best to don the attributes of queenliness throughout the play, the upstart Elizabeth Woodville (the Queen’s maiden name), ominously takes her jacket off near play’s end to have it out with the suddenly wussy Richard.  The street brawl that follows illustrates just how complex Elizabeth and Richard’s portraits are.

Then, we have Stanley, played by Richard Sheridan Willis.  Willis gives this Lord such a mild and inoffensive manner that one would never consider his betrayal even possible, much less pivotal to the entire drama and its conclusion.

The entire ensemble of Richard does an excellent job capturing both the familiarity of the human behavior we witness as well as the uniqueness of their age and status.  Whether we are looking at Elizabeth’s three children, Princess Elizabeth (Jenna Berk), Edward (Holden Brettell), or Richard (Remy Brettell); or at Richard’s henchmen, Radcliffe (Andrew Criss) or Loveli (Daniel Flint); or at Richard’s aggrieved mother (Nanna Ingvarssen)—we are seeing not only ourselves today but also people of a different age thrust into situations and charges beyond their own making.

The array of fascinating characters presented to us is offered on a platter of sorts, freed from the complications of plot and, thus, history.  The blood-bath that is Richard III becomes a psychological exploration rather than an exploration of the machinations of power and greed.

Set designer Tony Cisek gives us that psychic platter in the round, or rather rectangle, with an ornate silver trim.  Into that rectangle the murdered disappear, and then reappear, as Richard struggles with his growing paranoia and delusions.

Lighting designer, Jim Hunter, uses a full palette of color to present us these hallucinations of the living and the dead, while costume designer Mariah Hale’s black wrapped denizens crisscross the stage.

Punctuating Richard’s fluctuating nightmare is Eric Shimelonis’s soundscape, electrically signaling our descent into madness even as each death slams shut.

Significantly, the whole production team orchestrated the production’s most interesting feature: a postmodern creature from the deep. 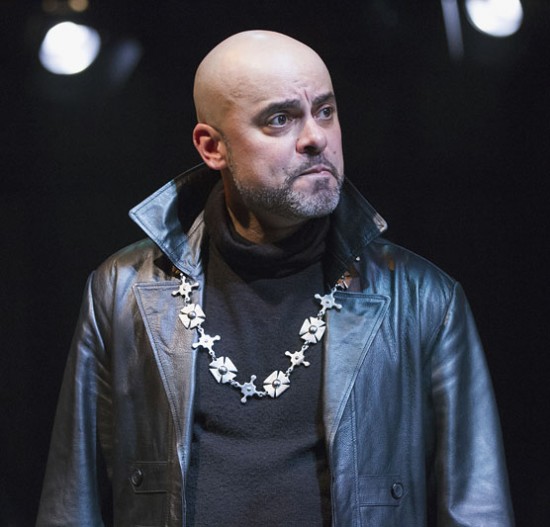 Michael Gabriel Goodfriend plays Richmond, the first of the Tutors come to save England from the likes of the psychopath Richard III.  Ironically, he first appears not as man, but as Richard’s own shadowy alter-ego, something more akin to a psychic Black hole than a flesh and blood man. Dressed in a Darth Vaderish robot head, and appearing static under dramatic downlight, this Richmond has all the attributes of Richard without the charm.  When we finally see Richmond taking the throne, Goodfriend’s charming Henry VII eerily reminds us of Richard.

To be sure, Folger’s Richard III fascinates its audience with its spectacle of characters and its unique perspective, not only on Shakespeare’s play but on Folger Theatre itself, as it is turned into a performance space more akin to its Globe original.

Running Time: 2 hours plus, with one 15-minute intermission.