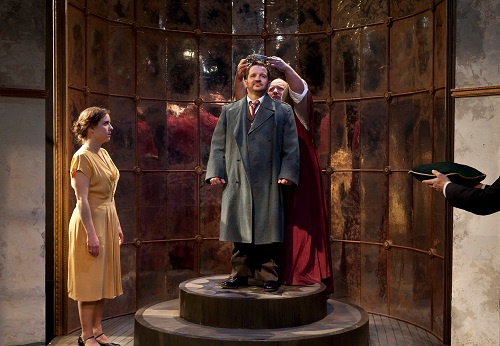 The idea behind Shakespeare’s Richard III is as simple as it is primal: a man, angry about his circumstances in life and seized by ambition, chooses evil and thereafter declines through cruelty to madness and eventual death. Shakespeare’s exploration of the process by which tyranny may triumph but is eventually self-destructive makes this play relevant today to places like Syria and the Sudan.

The present production of Richard III by NextStop Theatre Company at the Industrial Strength Theatre in Herndon, VA, presents  a Richard whose weapons include violence, duplicity, and especially hypocrisy. He will not stop at having his own brother murdered after declaring his loyalty to him, ordering the killing of two little boys whose lives stand in his way to the throne, seducing the woman whose father and husband he has killed, and appearing before the public with a prayer book in his hand, flanked by a bishop, declaring that he has no ambition at all. All this happens in a tiny theater hidden deep in a strip mall, seating fewer than 120 people. The stage in this crowded space is the actual floor or the building, whose steeply banked seats provide excellent viewing but heart-pounding accessibility.

…this ‘Richard III’ is not likely one you are going to get a chance to see again…well-staged, powerfully acted

Director Dr. Lindsey D. Snyder  has set the play  sometime in the twentieth century, mostly in a large interior room with multiple doors and a circular raised platform onto which kings and others ascend. Later this space becomes Bosworth Field, where the protagonist finally meets his end. One unexplained peculiarity of the set is a large candelabrum collapsed near the middle, whose major function seems to be to represent a bonfire in the final act. At first I thought it might be left over from an earlier production of Phantom of the Opera, but there it remained, even after intermission. Before the final scene it serves also as a repository for the combatants’ swords. 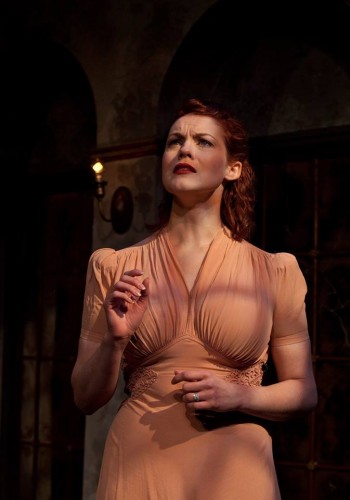 The remarkable feature of this presentation, however, is not set or costume but the director’s choice to depict Richard not as a limping hunchback but as a Deaf man. This choice leads to other inevitable accommodations. Ethan Sinnott uses American Sign Language exclusively, as do some of his henchmen. Their roles are spoken by Catesby or Buckingham when they are on stage, or a shadowy alter ego (Daniel Corey) for soliloquies and other situations.

In my opinion it doesn’t completely work, however. First of all, American Sign Language is a language separate from English, not a transcription of it, so as with all translations its use cannot render the essence of Shakespeare’s language.  “Loses breath” becomes “died,” for example, and “gazed upon each other” is interpreted as something like “looked stupidly around.” Much of what distinguishes this playwright from all others is thereby lost.

Besides, deafness, unlike scoliosis, manifestly affects communication, whereas Richard’s  rhetorical skill  is exactly what enables him to seduce, bamboozle or intimidate everyone around him. The audience is left to wonder, in addition, how do the others on stage respond to the subtleties of his reasoning, when all they have is another character’s interpretation? How does he understand what the others are saying to him, especially his mother, since she must have had some way of communicating with the deaf child? The distractions, in this case, seems at times to overwhelm the artistic benefits.

Those objections aside, The NextStop Theatre Company’s first 2014 production presents a well-staged, powerfully acted version of this difficult Shakepeare play. Elliot Sinnott, a teacher at Gallaudet University, gives us an athletic, intense Richard who moves from disaffection to eventual hysteria as his fortunes rise and fall. Comparison to other famous modern Richards like actors Olivier, McKellen, and Spacey fail, however, because they had to limp and he can jump, run and do acrobatic rolls in his performance. 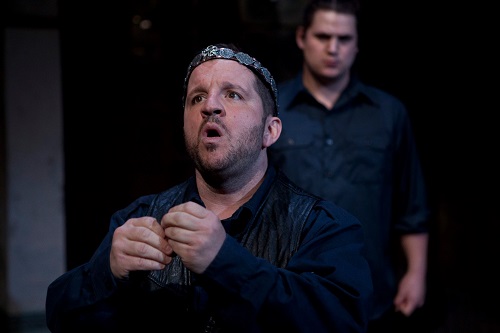 Of the women, whose roles in this play require mostly moaning, railing, and prophesying, Carolyn Kashner as Queen Elizabeth and Rachel Spicknall Mulford stand out. Their reading of Shakespeare’s iambic verse, often a problem for American actors, was coherent and confident. Mary Suib as Queen Margaret, however, wasn’t quite crazy or angry enough for her part, evoking in me just a bit of the suburban grandmother rather than the deposed queen.

Among the other supporting actors, Zack Brewster-Geisz brought a special salience to his role, as he patronized the Deaf prince and later, as the Lord Mayor, projected a template of subservience. Everyone else in the cast also added to a solid production. Many had multiple parts, in the Elizabethan tradition, and did them well, though the introduction of female soldiers in Act V was a bit of a distraction.

One moment in the play deserves mention. The murderer of the boys in the tower (who is uncredited in the program) gives a soliloquy of several minutes, in ASL and without voice interpretation, was for me the high point of the whole experience. His forceful, poetic, even balletic use of sign showed its power and its beauty.

Opening night was one of four performances in which the spoken parts are signed. On this night there was many Deaf members of the audience, possibly from Gallaudet, where the director, the main character, and maybe other cast members teach or study.

This slant on a Shakespeare play is interesting if not completely successful in my opinion, but this Richard III is not likely one you are going to get a chance to see again.

Conrad Geller began his play-watching experiences with a performance of HMS Pinafore in about 1942. He has been hooked ever since. His reviewing credits include books and films as well as drama. A prize-winning poet, he has also published widely in such areas as language study and education. Formerly Literary Manager of The American Playwrights Theater, his one-act play, “The Turing Test,” was recently performed at George Mason University.