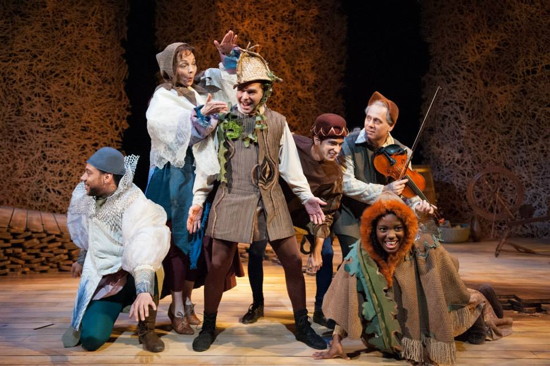 Rumpelstiltskin is a scary fairytale about a selfish King, a desperate father, a lonely young girl who must fight for her life and a mean and menacing goblin.  Or at least, that’s the version originally written by the brothers Wilhelm and Jacob Grimm in the 1800s.  However, Imagination Stage’s version of Rumpelstiltskin, directed by Janet Stanford, is played out on stage like a quiet folk story, recited by a babbling brook.

The story begins with a recently widowed Miller and his beautiful daughter.  The Miller wants more for his daughter then their current life of poverty, so when the Miller has the opportunity to meet the King, he tells the King that his daughter can spin hay into gold.  The King takes the daughter and puts her in a room full of hay and orders her to spin it all into gold or she will be killed in the morning.

Imagination Stage takes a dark fairytale and weaves it into a story of forgiveness, loyalty and family strength.

Her tears and desperation attract Rumpelstiltskin, a mischievous imp willing to spin the hay to gold for a price.  The first night he asks for her necklace.  In the morning the king is amazed and puts her into another room filled with even more hay.  Again she cries, and Rumpelstiltskin spins it all to gold for her ring, but on the third night she has nothing more to offer him.  Rumpelstiltskin says his price for this final room is her first-born child.  Desperate, she agrees to his terms.  The next morning the king is amazed and makes her his wife. 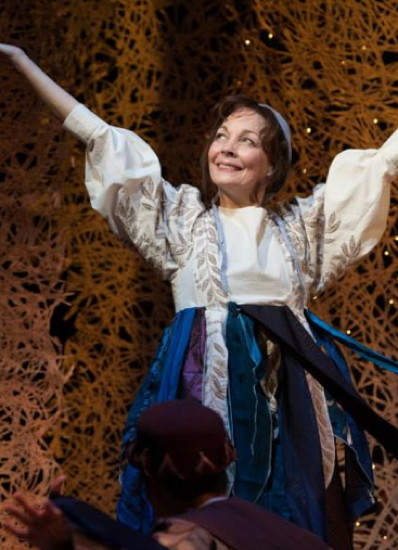 A year later their own daughter is born.  The Queen (formerly known as the Miller’s daughter) had forgotten all about the deal she had made with Rumpelstiltskin.  When he appears to claim the baby for his own, she offers him all the riches in the land.  Rumpelstiltskin refuses and tells her that if she canguess his name in three nights’ time, she can keep her baby.

Imagination Stage’s cast is a true ensemble, with most actors playing at least two characters (Ricardo Frederick Evans, Miller/Chancelor; Jason Glass, King; Kathryn Kelley, Queen/Mess; Matthew Pauli, Rumpelstiltskin; and Katherine Renee Turner, Miller’s Daughter).  They also each played my favorite characters in this story: small, mythical household spirits known as “hobs.”  The Miller’s home has a band of hobs who do small jobs around the house to aid in the chores.  But those hobs can also cause messes when slighted.  So very amusing to watch!

Anthony Hyatt added to the folk-like atmosphere with his fiddle.  Hyatt strolled around the stage with the other actors adding live music directly for each mood and scene change, a very surprising and welcome addition to the show.

Daniel Pinha cleverly designs the stage with stacks of long lengths of wood.   Some wood pieces are able to slide out of the piles to be used as various other props.  The backdrop is a divided curtain of hay that sparkles when turned to gold. 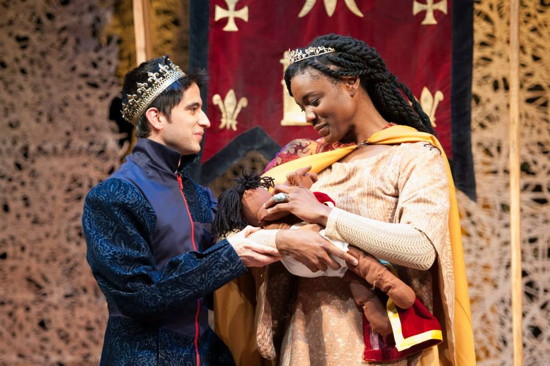 Jason Glass as the King and Katherine Renee as the Queen. Photo provided by Imagination Stage.

As the story comes to an end and the Queen must identify Rumpelstiltskin’s name in three days to save her family, the action increases.  The audience cheered for the creative way Rumpelstiltskin is sent on his way.  Imagination Stage takes a dark fairytale and weaves it into a story of forgiveness, loyalty and family strength.