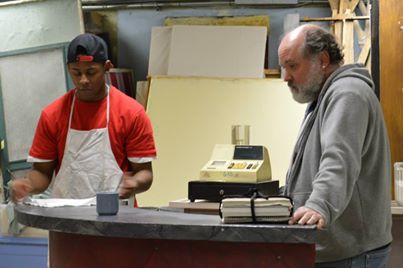 Whether by divine order or by sheer coincidence certain people come along and change our lives, for better or for worse.  Encounters with strangers, however long or brief, often have a way of teaching us about ourselves and the world in which we live. In Superior Donuts, a comedy-drama by actor and playwright Tracy Letts, the lives of two very different men intersect to electrifying result. Silver Spring Stage mounts a cool and confident version of this follow-up to August: Osage County, Letts’ prize-winning 2007 drama.

…everyone should be paying attention to this theatre and this play.

This play is a surprisingly simpler contrast to Letts’ Tony-winning, magnum opus. August: Osage County is laden with over a dozen, mostly high-strung characters and an intricate and frenzied plot, whereas Superior Donuts focuses primarily upon the lives of two male characters from opposite walks of life. The latter play is more cerebral in tone and opines the pursuit of happiness and the American Dream. In brief – a troubled but charming African-American male talks his way into a job at a failing donut shop run by a white, male, Chicagoan, hipster.  Eventually, their professional and personal worlds collide as each man’s past comes back to haunt him. Each endures his unexpected day of reckoning. 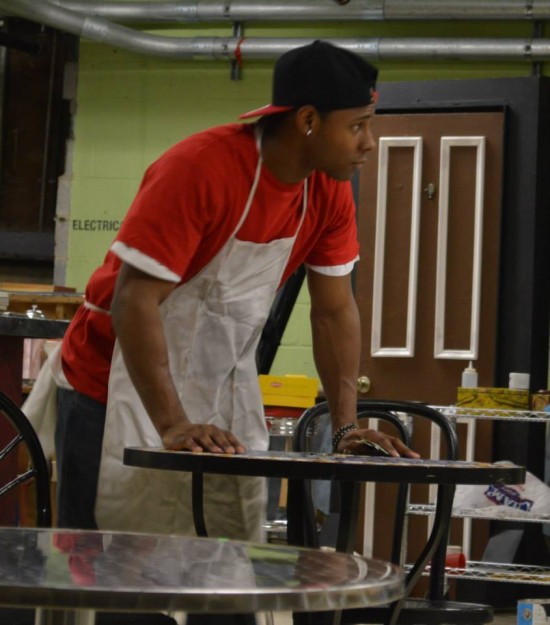 Director Stenise Reaves makes mostly good choices with Letts’ sometimes staid material. For example, rather than navigate cumbersome set changes, the actors make creative use of the stage’s periphery by entering and exiting into the audience or around the edges of the stage itself. Likewise, many of Arthur Przybyszewski’s (Nick Torres) fourth wall-breaking monologues are salvaged by the continued movement of the actors in the background. Such soupçons of ingenuity help to lessen the predictable nature of the storyline. Unfortunately Letts’ handling of race relations is a little foreseeable and uncomplicated, though not offensive or irresponsible. It’s just… I’ve seen it before and so have you, in a sitcom, a Nightline expose’, or a formulaic afterschool special. Still, the chemistry between the actors is undeniable and the dialogue is bursting with clever quips, comedic one-liners and light-hearted humor that make Superior Donuts a pleasant and satisfying show.

The characters in this play are a grab bag of archetypes, people we’ve all encountered on a day to day basis. Shelly Rochester is quirky and sweet as Lady Boyle, a homeless alcoholic who frequents Arthur’s store for coffee and donuts. Likewise as Max Tarasov, a Russian opportunist and entrepreneur, William Cassidy lends the right blend of boisterousness and verve making this character’s flaws (i.e. racial prejudices) almost forgivable and even amusing. Cassidy’s Russian accent (thanks to Dialect Coach, Olga Shanks) is strong as well (at least to the untrained ear). Greg Garcia, with his machismo stance and brash delivery is believable and appropriately intimidating as Luther Flynn, a hustler who believes in street justice and retribution by any means.

Donta Hensley is a scene-stealer as Franco Wicks, a troubled but optimistic Black youth with big ideas who talks Arthur Przybyszewski (Nick Torres) into giving him a job at his donut shop. Hensley is spry and buoyant on his feet, perfectly reflecting the character’s youthful energy and enthusiasm for life. Hensley is immediately likeable and engaging and thus compels the audience to root for his success. His comedic timing is spot-on, but he equally delivers emotional depth and intensity as Franco is forced to face his very serious problems. Hensley is a star on the rise and I look forward to seeing him perform again.

As Arthur Przybyszewski, the jaded, pot-smoking, beatnik owner of Superior Donuts, Nick Torres lends a calm, controlled and understated quality to the role. His reserved nature balances nicely against Hensley’s verve. Even more so it makes the back and forth banter between the two men all the more hilarious. Torres is equally amusing during his exchanges with Jill Goodrich who amiably and quietly portrays Officer Randy Osteen, a local cop with a kind heart and a big crush on Arthur. With his straight-faced delivery,  Nick Torres offers a gentle, warm, sympathetic, and relatable energy to a story full with frenetic characters.

Silver Spring Stage has done an impeccable job of recreating Letts’ tale of human connection and self-reinvention in their bright and imaginative version of Superior Donuts. At the start of Act One, Max Tarasov (William Cassidy) asks “Is anyone paying attention in America?” I don’t know the answer to that, but I do know that today, everyone should be paying attention to this theatre and this play.