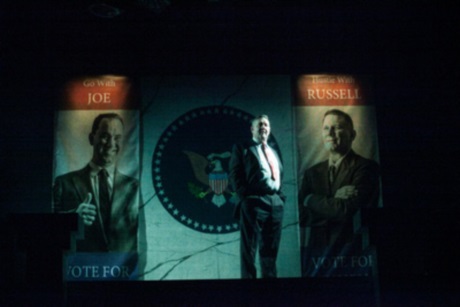 Generally speaking, American theatregoers hate mixing politics and art: they almost always prefer the juicy personal drama, the edgy dysfunctional family comedy, or the sexy musical melodrama where heartstrings are plucked and voices quake.  That’s why even hit TV shows like Scandal, where political machinations are the theme of each episode, the producers make the goings on so hyperbolic as to make them scandalously absurd.  Thus Scandal becomes not so much about the politics as about how each episode tops the preceding one in outrageousness.  Of course, those lusty scenes do not hurt the ratings either.

…a play worth seeing.

That’s why Gore Vidal’s Tony-nominated The Best Man, now playing at Dupont Circle’s Kreeger Theatre, is such a dinosaur–of the good kind.  Although its protagonist, erudite presidential candidate William Russell, has a problem with young women and has recently suffered a mental breakdown, the script resists the temptation to venture into those wellsprings of popular interests. 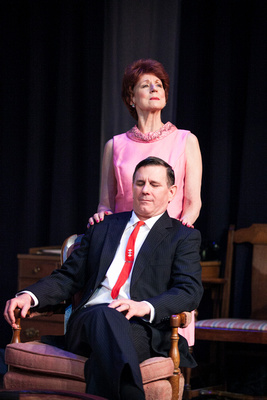 Instead, what we get is an old fashioned theatrical exploration of political ethics, the kind that used to have meaning, before we became swamped in tabloid presidencies and network news anchors as gossip columnists.

Keegan’s production, directed wisely by Timothy H. Lynch and Christina A Coakley, focuses on the script’s carefully crafted action; its characters remain grounded, preferring to let the dialogue wow us with its insight, foresight, and continuing legacy.

Gore Vidal, a public intellectual of the truest sort, engaged the American public in a variety of ways.  Not only did he run twice for office–for the House in 1960, the Senate in 1980–he also carried on fierce debates with conservative icon William F. Buckley, who after calling him “a queer” on national television apologized, amending his comment to read:  “an evangelist for bisexuality.”  Vidal also published numerous novels, wrote the screenplay for Ben Hur and other films, and took The Best Man to Broadway.  It has since been revived twice, in 2000 and more recently in 2012.

Happily, and perhaps strangely, The Best Man has lost little in relevancy, except perhaps its optimistic outlook on the ethical possibilities of American politics, and that’s because its central premise is rooted not in shock value or gimmickry, but in good old fashioned truth in advertising.

The scandals of this play are as real today as they were back in 1960 when Melvyn Douglas won his Tony for the role of William Russell.

Mark A. Rhea plays Russell at Keegan and he does so with professorial stoicism, even though his performance could have benefited from more charm and a little of Russell’s professed womanizing flirtatiousness.

Going into the Convention with a lead in the polls, despite his proclivity to make obscure references to Oliver Cromwell and the like, Russell confronts his chief nemesis Joe Cantwell, played with a slick nastiness by Colin Smith. Cantwell has unearthed Russell’s psychiatric files and is threatening to go public unless Russell pulls out of the race.

To counter Cantwell’s dirty tricks, Russell’s campaign manager, Dick Jensen (played with wise-cracking ease by Stan Shulman), uncovers his own bit of dirt on Cantwell, a possible homosexual affair while in the military over a decade earlier. Former soldier Sheldon Marcus is ushered in to tell the tale, played with an appropriate mixture of awe and fear by Michael Innocenti.  Meanwhile, Cantwell’s manager, played straightforwardly by Peter Finnegan, does his best to keep up with the punches and charges.

And then we have the candidates’ wives.  Sheri Herren plays Alice Russell with a pitch perfect Barbara Bush steadfastness, albeit one with a slightly thinner skin.  Cantwell’s wife Mabel, on the other hand, is all crass and vindictiveness, and as played by Susan Marie Rhea the vision will make your skin crawl.

Standing above all this is former President Arthur Hockstader, played with charming Southern sense by Kevin Adams.  He detests both candidates, not for their views on the issues, but because of their inability to understand politics and play by its rules. 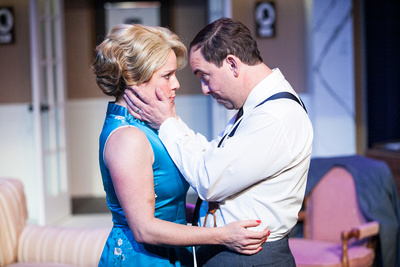 To be sure, the standout performer in Keegan’s production is Gore Vidal’s script, which after 50 plus years of political fever remains as relevant and funny as ever.  You cannot say that about too many scripts these days.

With its insights cutting edge and its wit cutting deep, The Best Man is most definitely a play worth seeing.

Running Time: 2 hours and 20 minutes, with an intermission.