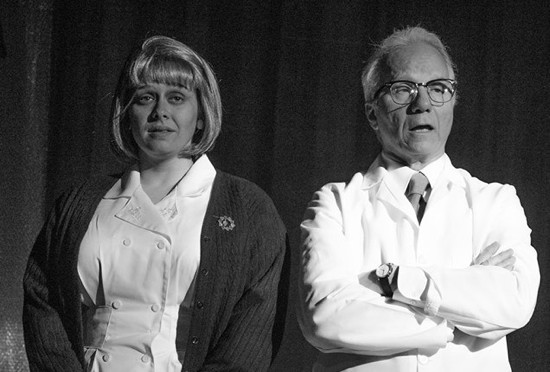 Baltimore used to be the city where many shows came for their pre-Broadway previews. As the years passed, it has become a theatrical stepchild because of its close proximity to other major cities such as D.C. and Philadelphia. But a recent renaissance has been bringing new life to historic buildings and new homes for dedicated, local theater companies who have paid their dues.

In 2013, The Everyman Theatre moved from its space near the Charles Theatre to a renovated vaudeville house around the corner from The Hippodrome. The Chesapeake Shakespeare Company will soon open at its new location in an historic bank building, the Mercantile Building, renovated by the same architecture firm used by Everyman.

A little theater-company-that-could has come along way from its beginnings in a small space at Loads of Fun on North Avenue. In a repurposed tire repair shop in Remington, Single Carrot Theatre has found a quirky and fun new location that will also house a trendy new restaurant, office space and onsite parking. With a flexible black box space that seats approximately 99, a rehearsal hall, scene shop, large lobby, storage and offices for the company’s operations, Single Carrot has room to spread it wings.

Known for more avant-garde and experimental productions, the company christened its new space with the 2003 play, The Flu Season, which won the Oppenheimer Award in 2004 for best debut by an American playwright. Written by the cerebral Will Eno, the wordplay can sometimes be overwhelming but ultimately full of little gems of observation. This is an early piece by a playwright on the rise who has two new productions in New York – the off-Broadway premier of The Open House and his upcoming Broadway debut of The Realistic Jones which includes a powerhouse cast in Toni Collette, Michael C. Hall, Tracy Letts, and Marisa Tomei.

From the start, the audience is asked to participate. They must find their seating not through the back of the theater but are require to traverse the raked stage in between the actors who, like a Whack-a-Mole game, pop up from trap doors, putting on makeup or stretching, exercises traditionally done in small dressing rooms backstage. The stage is a physical representation of the often tricky and slippery slope of human relationships and emotions. 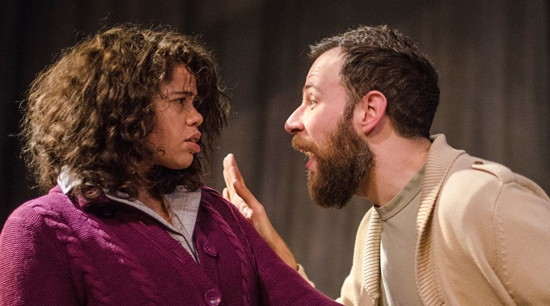 The audience is guided through this production by Prologue (Dustin C. T. Morris) who represents optimism, hope and enthusiasm for life and love while his counterpart, Epilogue (Allyson Harkey), is cynical, sarcastic and jaded. Prologue is unaware of Epilogue, which makes for an interesting dynamic. The two move the set pieces, props and introduce each scene. They also often talk directly to the audience. We are told that this is a play about a play – perhaps about Eno’s own process. A mix of humor and tragedy, the setting is a psychiatric hospital where two of its residents, simply called Man and Woman, meet and become involved in a doomed love affair. The Doctor and Nurse in charge of the patients, though sometimes silly and self-involved, provide a more humorous view of a blossoming relationship between an older couple full of past regrets and memories – yet still hopeful.

Directed by Alix Fenhagen, the production ultimately draws you in with its fine cast and it is a solid production. Jessica Garrett as Woman and Paul Diem as Man interact beautifully from their first sweet awkward moments until the sad end. Michael Salconi as The Doctor and Genevieve de Mahy as the Nurse are brilliant to watch.

The set designed by Ryan Haase is minimalist yet highly functional. The trap doors in the stage represent a memory when opened. The set pieces are comprised of cubes that are moved around to create a chair, a bed, table and a couch. The props are painted all white – fruit, books, and a record player – while the “furniture” and set are a light hospital green. There is a clever use of lighting by Joseph R. Walls to change scenes utilizing those buzzing, large florescent lights hanging above that are often found in a hospital setting and the unique use of an old-fashioned overhead projector.

Though the production has ended its run, one eagerly awaits to see what Single Carrot Theatre offers up throughout the rest of its season in this exciting new space at 2600 North Howard Street, Baltimore, MD. www.singlecarrot.com.  For more information call 443-844-9253 or click here.