Theatre Review: ‘We Are Proud to Present a Presentation about the Herero of Namibia, Formerly Known as South-West Africa, from the German Sudwestafrika, Between the Years 1884-1915’ at Woolly Mammoth 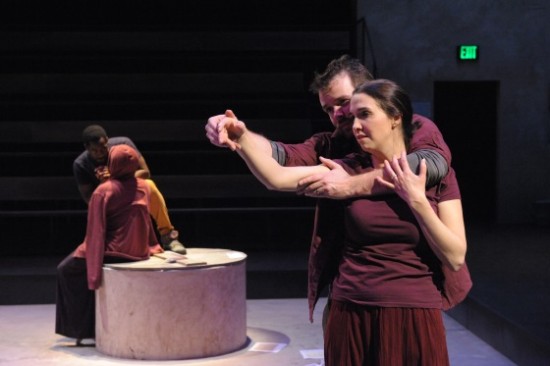 We Are Proud to Present…, now playing at Woolly Mammoth Theatre Company, asks the simple question: how do six middle class actors from the United States, one of the most powerful countries in human history, come to grips with, and thus create a play about, a turn-of-the-20th-century holocaust in the African country of Namibia?

The results are stunning, fantastically funny and emotionally exhausting, but not in ways the question might suggest.

First of all, genocides are not a favorite topic among Americans.  We have grown accustomed to hearing about the Jewish holocaust of World War II, but many of us do not want to hear about other mass killings.  In fact, many Americans become holocaust-deniers when the subject of Africa comes up. Although many will accept genocide in Rhwanda or Darfur, few accept genocide in South Africa beginning in the 1500s, or genocide under King Leopold in the Belgian Congo in the 1890s, much less in Namibia in 1900.  And do not even attempt to bring up the Americas–North, South, Central, and Caribbean–since in that land we now call home we believe that no genocide could “possibly” have been used to clear the land of their previous occupants. 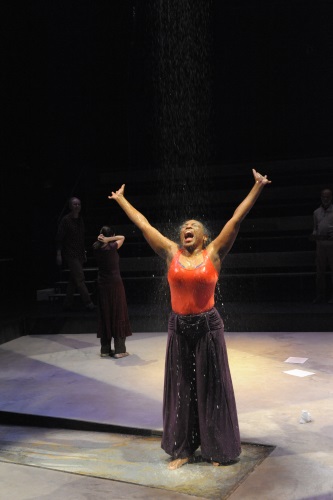 Genocide is painful; genocide is messy; genocide is always about the other guy.  “Not me!  I wouldn’t do that.”  And art is hard to do when it is the other guy the artist is talking about.  That moral outrage at the other is called politics not ethics, the supreme province of art.

Its long title (see headline) will remind the theatregoer of the equally long title of Peter Weiss’s Marat Sade (see Wikipedia for complete title), another political play about a historical subject.  Drury replaces Weiss’s cast of asylum patients with a cast from a fictional theatre troupe.  She replaces the French Revolution with the German colonial expansion into South West Africa, which resulted in the removal and subsequent genocide of the Herero people (approximately 80% were exterminated).

The problem this cast of three white and three black actors face (four men, two women), however, is that the only historical evidence they have from Namibia is a box of letters written to loved ones by German soldiers.  These letters make no reference to the dirty business of removing one group of people from a land claimed, and more importantly lived on, by another.  When people say that history is written by the victors, what they really mean to say is that the victors, in glorifying their accomplishments, destroy or bury the evidence of their wrong doings. They turn the humanity of their victims into monsters, making them terrorists and subversives not people seeking to maintain a way of life.

Thus,  the Herero people, the subject of We Are Proud to Present…, have nothing or no one who speaks for them, but silence.

As a result, these actors do what anyone would do in similar circumstances: they invent stuff, i.e., they use their imaginations to create what might have happened in Namibia 1900.

Using this conceit–a play that recreates the creation and rehearsal process for a play–these six actors improvise characters and situations, argue over results and foci, find their motivation or another’s motivation, and in the end unleash forces within themselves that they wish they had not unleashed.

As a result, We Are Proud to Present… becomes not so much about Namibia as about America.

As a result, we witness not only the current state of debate in the United States about race, history, genocide, and colonial (make that post-colonial) expansion throughout the world, but also the current state of our psychological and imaginative beings as they relate to lynching, southern racism, masculinism, and power.

The story is basic.  The troupe’s artistic director, portrayed by Dawn Ursula, wants to create the play about Namibia’s holocaust using that box of letters from German soldiers.

After delivering the outrageously funny historical introduction on Namibia’s colonial history and then starting the first letter, the artistic director changes her mind: the letters are all the same.

Ursula’s artistic director plays protagonist with a fierce combination of grace, humor, and stubbornness.  Though claiming collaborative intent, she pushes her actors into psychological terrain no one is prepared to enter, much less explore with knowledge and art.  This naiveté is essential to the play’s believability. 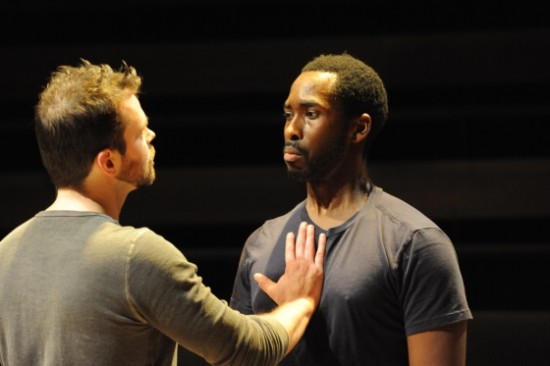 The chief victim of her aesthetic passion is the actor who plays Black Man, portrayed by Andreu Honeycutt.  His actor does not want to create another play that focuses on white people and their struggles in Africa.  Honeycutt does a masterful job.  He combines the young man’s pride and intelligence with his subjectivity.  The emotional flare ups are both genuine and intense.

Peter Howard portrays White Man in the story.  His actor, the son of a long line of Pennsylvania coal miners, has several stellar scenes: in one he plays the fictional grandmother of the artistic director.  She declares all attempts to capture the Herero people arrogant and foolish: the proceedings come to a screeching halt.  Afterwards, all attempts at historical support for the play disappears: the actors’ imaginations run wild.

Joe Isenberg plays a young German soldier and husband with a wonderful combination of romanticized glee and robust determination.  Isenberg’s scene with Honeycutt, where the two actors threaten to bring the whole process to a brawl, is a jewel.

Mr. Williams plays Another Black Man.  Paralleling Howard’s White Man, and opposite Honeycutt’s fierce Black Man, Williams creates a character doing his best to find peace in a turbulent world.  At one point, as the stage erupts in tempestuous debate, his actor sits yoga-style off to the side.  One cannot hear his “Ohms” but one can imagine them, and the laughter is marvelous.

And then there is Holly Twyford’s character To Be Named Later.  Unlike the men in this want-to-be Namibian drama, Twyford’s character does assume a name: Sarah, the every German wife.  She sits back home wanting children, wanting a home and a farm, wanting her man to get those things by any means necessary.  Twyford once again demonstrates her ability to immerse herself in a situation, capturing both its emotional underpinnings and its nuances of behavior.

Michael John Garcés directs the proceedings with a master’s touch at tempo and visual display.  Although the in-the-round staging makes matters difficult at times, he handles this choice well.

His production team has outdone themselves.  First of all, although the scenography for this show is minimal, each choice is carefully choreographed.  Misha Kachman creates an empty space, so to speak.  At the appropriate time, she unveils a well, a rain shower, a lynching tree.  Lights by Colin K, Bills are subtle, yet powerful; and costumes by Meghan K. Healey are relatively non-descript, but once again highlight each change in decor.

To be sure, Drury’s play is a powerful exposé on race relations in America today; and Woolly’s production gives Washington’s audiences a brave new voice on the American theatre scene.

“Is there any purpose to delving into such painful territory?” the play seems to ask as it comes to curtain.  “Have we been purged?” “Are we ready to start afresh?” “Or might we have been better off simply ignoring that horrible topic and, as a recent President advised, ‘go shopping more’ while the horror continues?”  Perhaps in some tomorrow we will know the answer to those questions.

Although We Are Proud to Present… might, in the end, focus too much on the usual suspects–those Germans and those Southern White Men–as the perpetrators of all the world’s genocides and racial crimes, its exploration of the process of empathy and its limits will most assuredly spark debate and raise questions.

We can only hope that empathy, however flawed and difficult a vehicle it might be, will remain an important tool in our relations with one another.

We Are Proud to Present a Presentation about the Herero of Namibia, Formerly Known as South-West Africa, from the German Sudwestafrika, Between the Years 1884-1915 plays at Woolly Mammoth, 641 D Street, NW, Washington, DC, through March 9. For tickets click here.