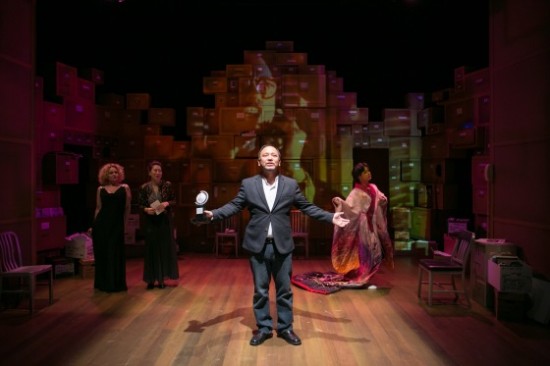 Chinese-American, African-American, Jewish-American, Irish-American, Latin-American, Christian-American, Native-American, White-American, Texan–each of us makes certain choices, willingly or no, about how we will be known, to others and to ourselves.  Some choose race as a leading factor; some, ethnicity; while others chose religion; others, sexual-orientation or the 2nd Amendment.  Whatever the choice–and the list of possible factors is as long as a list of D.C. lobbyists–in today’s taut, politically-charged environment, discussion about the construction of identity is a “no-no.”  To hyphenate your Americanism, or not to hyphenate it–better keep your mouth shut, unless fending off slings and arrows is one of your favorite things.

And that is why David Henry Hwang’s Obie-Award-winning play, Yellow Face, now playing at Washington’s Theater J, tackles its subject with a tongue thrust through its cheek and a self-effacing Hwang (constructed of course by Hwang himself) as its central character. 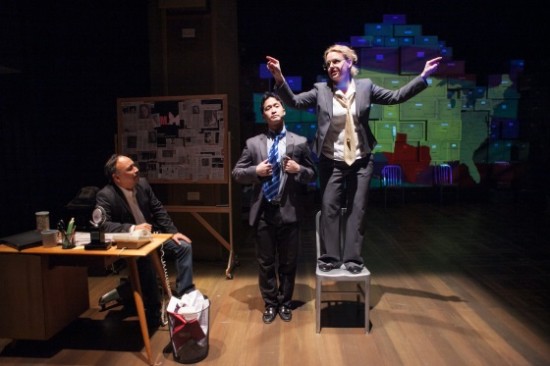 The production succeeds wonderfully and will no doubt raise your eyebrows, turn your head a time or two, and most definitely send you home with chuckle in your heart.

Autobiographical in substance, but creative in approach (that’s creative autobiography for literary types), Yellow Face takes playwright Hwang’s activism around issues of Identity Politics and racial injustice and juxtaposes it with his father’s belief that in America a person could truly not be judged by the color of his (or her) skin, or in this case face.

The results, believe it or not, are thoughtfully hilarious.

In 1991, as the musical Miss Saigon (by Claude-Michel Schönberg and Alain Boublil, with lyrics by Boublil and Richard Maltby) was headed for Broadway from its success in London, Hwang led protests over the fact that Jonathan Pryce, a Caucasian British actor, had been cast to play a Eurasian pimp in the show, in yellow face, i.e., wearing eye prostheses and bronzing cream.  Hwang compared the casting to a minstrel show.

Stan Kang plays the playwright David Henry Hwang in the show, and he does so brilliantly.  Charming and vulnerable, Kang will leave you feeling as if you have met the real life Hwang and really gotten to know him.

Problems arise for Hwang, however, as he prepares for his second Broadway script, Face Value, which in real life failed miserably and has never been published. 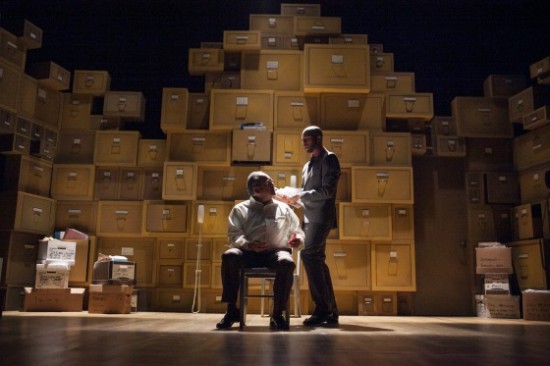 Following the enormous success of his M. Butterfly, a historically-based script that critiques Puccini’s Orientalist Madame Butterfly (whose storyline, ironically, Miss Saigon uses to perpetuate the stereotype of the Asian female as submissive and loyal to the point of suicide), Hwang desperately casts what he hopes is a Eurasian actor in the play’s leading role.  The problem is, that actor, Marcus G. Dahlman, played fabulously by Rafael Untalan, is of Russian, Jewish ancestry, without even a hint of Asian.

When Hwang’s magical thinking comes to the surface, the activist playwright goes to extreme lengths to conceal his politically incorrect choice.  He goes so far as to change the actor’s name to Marcus Gee, making him a Siberian (that’s in Asia) Jew.

When Marcus Gee likes the idea and begins to run with that ball, the comedy, and the social satire, runs with it, with fabulous results.

An ensemble of talented actors fills out the cast, each playing multiple roles that cover the gambit from historical political figures like John Kerry and actor-turned-Senator-turned-actor Fred Thompson to local talking head, George Will.

Leading the ensemble of funny folk is Al Twanmo, who plays, among others, the playwright’s father.  The old man’s enthusiasm is palpably humorous, as he wants more than anything to have his own Wonderful Life here in America.  Even when those dreams of being Jimmy Stewart collapse under the strain of an FBI investigation into his bank’s finances and its connection to “RED” China, Twanmo keeps it funnily sincere.

Sue Jin Song does a great job mixing it up with her collection of characters, most notably a strikingly authentic Lilly Tomlin.  Her turn as the playwright’s ex-girlfriend, however, had the audience in stitches. 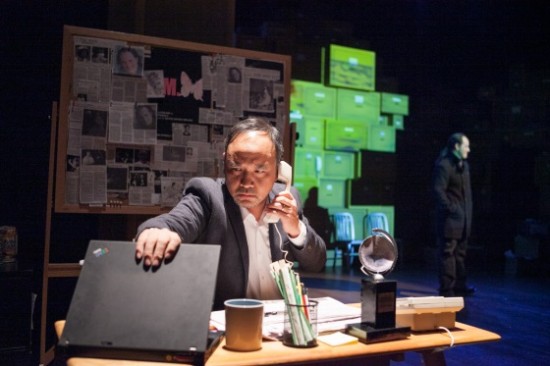 Brandon McCoy plays a half-dozen or so characters, including Ed Koch.  His scene with Kang’s Hwang, however, as the New York Times reporter intent on exposing Communist Chinese influence in politics, brought the house down with applause (remember the supposed Chinese funding scandal in the 2000 presidential campaign and the travesty of Wen Ho Lee, falsely accused of spying for China and kept in solitary for months?).

…will no doubt raise your eyebrows, turn your head a time or two, and most definitely send you home with chuckle in your heart.

Mark Hairston takes on a plethora of personas, from Kerry to Cavit to the mysterious Yellowgurl8, whom the playwright chats up online–sexually, to his embarrassment.  He gives each one a distinct, and immediately identifiable look.

Finally, we have Jacob Yeh and Tonya Beckman. Yeh’s eight or nine characters include a hilarious Senator Shelby as well as a delightfully enjoyable young videogame playing actor named Rodney Hatamiya.  Ms. Beckman’s include everyone from Frank Rich to Thompson, but her soapbox portrayal of Representative Tom Delay was priceless.

Putting this social satire together was Natsu Onada Power.  Although projections (her specialty) play a part in this production, its Power’s ability to choreograph a story that shines here.  She keeps the pace sharp and the spirit of theatre sparkling with vim and vigor and improvisation-like spontaneity.

Her production team did a fine job as well, led by projection designer Jared Mezzocchi who gave us a host of interesting faces both during the show’s preshow and at the end.  Scenic designer Luciana Stecconi’s abstractly expressionist bureaucratic wall was appropriately humorous.  Lights and sound, designed by Dan Covey and Chris Baine respectively, added to flow.  Meanwhile costume designer Debra Kim Sivigny kept things as real as they should have been.

David Henry Hwang is most definitely one of this country’s most dynamic playwrights, offering audiences insightful commentary on a host of current issues.  With Yellow Face  he takes on the contradictions bubbling away within our cultural landscape, as we try to balance democratic values and their egalitarian underpinnings with our notions of group identity and their inherently exclusionary byproduct.  The political correctness that sprouts up on either side of that divide is fraught with tension.

Theater J’s Yellow Face with its multi-racial, multi-ethnic ensemble of actors and characters cracks us up with its good natured, self-critical satire.  Hopefully, as we laugh our giggles shed some light on that wavering line between who we think we are and what we might eventually become: but only if we keep laughing at ourselves and each other.

Running Time: 2 hours and 10 minutes, with an intermission.