1. ‘Mother Courage and her Children’ at Arena Stage, the Mead Center for American Theatre

“First of all, Bertolt Brecht is a master playwright, the likes of which come along only rarely in the theatre.  His Mother Courage and her Children is one of the great scripts of the 20th century, defining a century of bloody war that threatens the 21st with even greater catastrophe.” Robert Michael Oliver

Synopsis: Kathleen Turner returns to Arena Stage after her sold-out run of Red Hot Patriot: The Kick-A*s Wit of Molly Ivins to star in the mother of all roles. Tough-as-nails matriarch Mother Courage profits off the very war that steals her children from her one by one. But will the cost of war be higher than she’s prepared to pay? Artistic Director Molly Smith helms this unique in-the-round staging of Brecht’s powerhouse anti-war play fusing politics, satire and music into an epic theatrical experience. 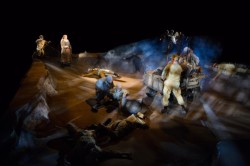 2. ‘Orphie and the Book of Heroes’ at The Kennedy Center’s Family Theater

I remember a time when children’s shows featured large, beefy and, most of the time, dim men as the heroes of the story.  The prince swept in at the last minute to save the helpless princess, who was generally so useless that she couldn’t find her own way to the ball or would willingly accept food from a stranger so as not to be rude.  I am delighted to say that this tide has turned.  The Kennedy Center-commissioned Orphie and the Book of Heroes, in its World Premiere, creates a new definition of “hero” in a tidal wave of brilliant songs, humorous dialog and a whip-smart little girl who is not so little on the inside. April Forrer

Synopsis: Spunky and curious Orphie, a young girl in Ancient Greece, sets out to save storyteller Homer and his Book of Heroes in this humorous world premiere musical–a quest that takes her from the heights of Mt. Olympus to the depths of the underworld. 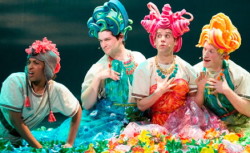 3. ‘Impossible!’ by Happenstance Theatre at Round House, Silver Spring

“The circus today has morphed in a couple of directions: to the streamlined arena fare of Ringling Brothers and Barnum & Bailey and the gymnastic spectacles of Cirque du Soleil and their imitators.  Impossible! the latest offering from Happenstance Theatre picks up on the circus back in a Depression era, when a big top in town and its assorted magic meant a temporary brightening on what might otherwise be a bleak landscape.  It’s almost too fitting for the troupe, who already look like time-travelers from the 1930s, adjusting their comic skills and rubbery faces from silent one-reelers to talkies.” Roger Catlin

Synopsis: A theatrical collage on the theme of circus set against a backdrop of hard times. In a kaleidoscopic homage to classic circus characters and images, Happenstance Theater applies virtuosic theatricality to a circus of the imagination. 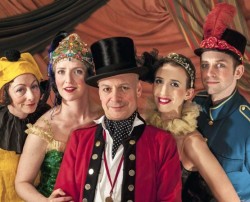 The cast of Impossible. Photo courtesy of Happenstance Theatre.

“Ray Cooney’s Funny Money at The Bowie Playhouse is an entertaining night out. At 2nd Star Productions this British Comedy comes to life as the hilarious twists and turns of the plot keep the audience and the characters on their feet. From loaded guns to loaded people, from injury to incest,  there certainly isn’t a dull moment in director Fred Nelson’s production of Funny Money.” Helen Gushue

Synopsis: Henry, a mild mannered British CPA, accidentally picks up a briefcase full of someone else’s ill-gotten gains. He decides to keep it and fly to Barcelona to start a new life, but his wife has other plans, and before they can leave, there’s an unexpected knock at the door. The circumstances that prevent Henry from working his way out of this problem are the kinds that only a master of farce like Britain’s Ray Cooney could create. You’ll love this hilarious comedy of errors.

5. Broadway in Annapolis: Once Upon a Mattress at Live Arts Maryland

Synopsis: Laugh the winter blahs away in this hilarious musical version of the Princess and the Pea tale!  Once Upon a Mattress, which made Carol Burnett a star, is a musical comedy with music by Mary Rodgers, lyrics by Marshall Barer and book by Jay Thompson, Dean Fuller, and Marshall Barer.

It opened off-Broadway in May 1959, and then moved to Broadway.  It’s been successfully revived often, most recently in 1996 starring Sarah Jessica Parker.

In this fairy tale kingdom, King Sextimus has fallen under a curse  leaving him speechless and the nasty Queen Aggravian has taken over control of the kingdom.  Her son, poor Prince Dauntless, wants to marry but she is determined that this will not happen or she’ll lose her power to rule.   She devises a very special test that any princess who wants to marry her son must pass.  This state of affairs is upsetting to everyone and all wish for a princess for Dauntless.  Enter Princess Winnifred the Woebegone, who immediately catches the prince’s eye.

In the hands of our talented cast, this funny musical tale is guaranteed to keep you laughing! 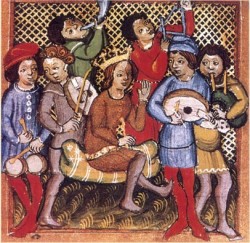