1. How to Succeed in Business Without Really Trying at Olney Theatre Center.

“Under the guiding hand of Mr. Loewith, the production is Broadway caliber in every respect…This is an extraordinary show that should not be missed.” –  Steve Charing.

Synopsis: The hilarious Tony-winning Best Musical of 1961, HOW TO SUCCEED IN BUSINESS WITHOUT REALLY TRYING! kicks off Olney’s 2014 season! A musical comedy of the “Mad Men” era, follows the rise of J. Pierrepont Finch, who climbs the corporate ladder from window washer to high-powered exec with the help of a little handbook called “How To Succeed In Business Without Really Trying.” Can Finch tackle such potent dangers as the CEO’s nephew, the aggressively compliant “company man,” backstabbing co-workers, caffeine addiction, and multiple inter-office love affairs? 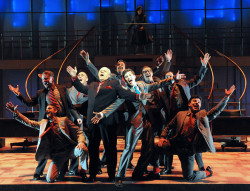 The cast of “How to Succeed in Business Without Really Trying’ at the Olney Theatre Center. Photo by Stan Barough.

2. Romeo and Juliet at the Spotlighters Theatre.

Synopsis: During a chance meeting a young boy and girl from rival families fall in love at first sight, but, the two lovers must be prepared to give up everything, including their lives, to be together. Set in an ancient city torn apart by feuds, Romeo and Juliet is a dazzling combination of unwavering love and searing hatred. Spotlighters Theatre’s production explores these passions in a sultry and thrilling production that brings new life and spirit to the world’s greatest and most enduring love story. 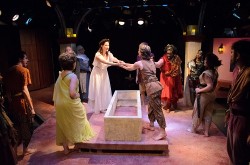 “…will no doubt raise your eyebrows, turn your head a time or two, and most definitely send you home with chuckle in your heart.” – Robert Michael Oliver.

Synopsis: The lines between truth and fiction blur with hilarious and moving results in David Henry Hwang’s unreliable memoir. Fresh off his Tony Award win for M. Butterfly, Hwang leads a community protest against the casting of a famous white actor as the Eurasian pimp in the original Broadway production of Miss Saigon, condemning the practice as “yellowface.” His position soon comes back to haunt him when he mistakes a Caucasian actor for mixed-race, and casts him in the lead Asian role of his own new play.When Hwang discovers the truth, he tries to conceal his blunder by passing the actor off as a “Siberian Jew.” As Hwang struggles to ‘save face’ amidst family politics, international intrigue and government investigations, he explores timeless questions surrounding cultural identity, dual loyalty, and responsibility. 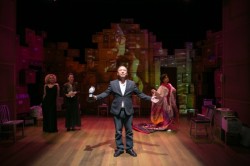 “…Richard III fascinates its audience with its spectacle of characters and its unique perspective.” – Robert Michael Oliver.

Synopsis: Exploring Shakespeare’s portrait of maniacal ambition and digging into the truth about this king’s real nature, Robert Richmond returns to the Folger to direct the celebrated history play. For the first time in Folger history, the Elizabethan Theatre will be reconfigured to allow for a production “in the round”. For more information on how this affects you, please click here for more information on seating for Richard III. 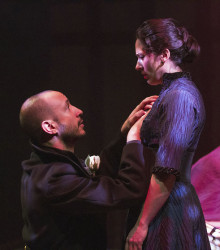 Synopsis:  A touching story of love, hope and healing. In the early 1960s, a young woman travels across the South in search of a miracle. On her journey, she meets two young soldiers who help her learn about courage, beauty and her own self-worth. Jeanine Tesori (Caroline, or Change, Fun Home and Thoroughly Modern Millie) returns with a dynamic score of bluegrass, gospel, country and rock. Directed by Tony-nominated Jeff Calhoun (Broadway’s Newsies). 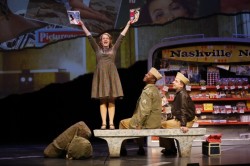