In the 1920s, the founder of French Surrealism, André Breton, famously said: “The purest surrealist act is walking into a crowd with a loaded gun and firing into it randomly.” Unfortunately, such aesthetically imagined acts have become all too commonplace in our society today and, although one can question the complete randomness of contemporary mass killings, one cannot question the recurrence of the terrifying shock and disbelief when each mass killing takes place. Robert Michael Oliver

Synopsis: In the wake of a violent tragedy at a local community college, a single mother attempts to reconnect with her withdrawn son. But strange forces keep interfering: the new family dog has three heads, an angry mob has gathered outside, and a chilling figure has occupied the refrigerator… 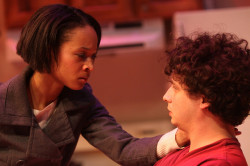 When the 2007 Tony Award winning musical Spring Awakening opened on Broadway in December of 2006 it was revolutionary for a number of reasons. It featured a cast of young talent including Lea Michelle from TV’s Glee and a score by Duncan Sheik (music) and Steven Sater (lyrics and book), which fused chamber and rock music together. The show was relevant then and still is today as it tackles issues that teens have been facing for many years. Issues such as parents pushing their kids to be perfect, teenage sex, bullying, and parental abuse are just a few of the tackled subjects. Elliot Lanes

Synopsis: A rock musical with music by Duncan Sheik and a book and lyrics by Steven Sater. It is based on the controversial German play Spring Awakening (1891) by Frank Wedekind which was banned in Germany for some time due to its frank portrayal of abortion, homosexuality, rape, child abuse and suicide. Set in late-19th century Germany, the musical tells the story of teenagers discovering the inner and outer tumult of sexuality. In the musical, alternative rock is employed as part of the folk-infused rock score. 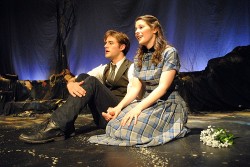 The epic quest for a white whale in Herman Melville’s classic Moby Dick seems an apt subject for an epic staging, operatic in its intentions and soaring in its scale.  The ropes tightening the rigging, the crow’s nest filled with people, the sweep of curved whaling boat behind a crew of dozens, singing out heroically in unison all combine to make the inevitable opera from Jake Heggie and Gene Scheer swell to the demands of the stage. But the Washington National Opera’s East Coast premiere of Moby Dick, directed by Leonard Foglia, does more than that. It’s dazzling with creative stagecraft that combines deft set building with the kind of exacting projections and animations that made the Sochi opening and closing ceremonies such a dynamic pageant.  Roger Catlin 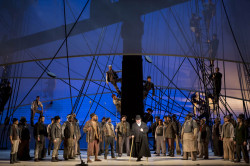 The cast of ‘Moby Dick.’ Photo by Scott Suchman.

4. ‘The Merry Wives of Windsor’ at Chesapeake Shakespeare Company

What do Platform Shoes, Barry White, and Shakespeare have in common? You can see all three and more at Chesapeake Shakespeare Company’s latest production of The Merry Wives of Windsor. Set in the 1970s, this funktastic production brings new insight to one of Shakespeare’s less popular comedies. Helen Gushue

Synopsis: “Falstaff first deceives the wives. The wives, Mr. Ford and Mistress Quickly and then deceive Falstaff. Falstaff gets into trouble because he is insincere, pretending to be lovestruck when all he is really interested in is money. The ladies turn the tables on Falstaff, and he gets his just deserts.” 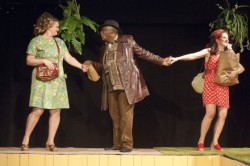 Whether by divine order or by sheer coincidence certain people come along and change our lives, for better or for worse.  Encounters with strangers, however long or brief, often have a way of teaching us about ourselves and the world in which we live. In Superior Donuts, a comedy-drama by actor and playwright Tracy Letts, the lives of two very different men intersect to electrifying result. Silver Spring Stage mounts a cool and confident version of this follow-up to August: Osage County, Letts’ prize-winning 2007 drama.   Victoria Durham

Synopsis: Funny and moving story of a decrepit donut shop in Chicago that explores the challenges of embracing the past and the redemptive power of friendship when the owner hires a young African-American as his only employee. 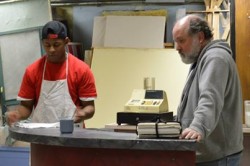