‘A Quick 5’ with James Sugg 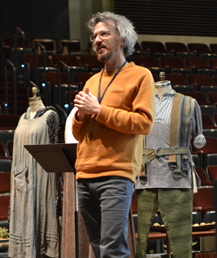 James Sugg is currently the composer and musical supervisor for Mother Courage and her Children at Arena Stage. His previous Arena Stage design credits include Good People, The Chosen and Long Day’s Journey into Night. While James is a talented composer he is equally comfortable performing onstage. He has previously been seen in Washington performing and designing at Woolly Mammoth Theatre Company (performing Mr. Burns and Hell Meets Henry Halfway and designing In The Next Room, or the Vibrator Play), performing Shakespeare and designing at The Folger (Sir Andrew in Twelfth Night, various roles in Melissa Arctic, composition for Orestes) and sound designing at Studio Theatre (Rainpan 43’s All Wear Bowlers; Amnesia Curiosa; and Machines, Machines…). James is a 15-year member of Pig Iron Theater Company, with whom he has created 20 original pieces. He is also the composer of the music theater pieces A Murder, A Mystery and A Marriage (book by Aaron Posner); The Sea; and Cherry Bomb (book by Jen Childs). Some people like to do just one thing in the theatre. Maybe they just want to perform or be behind the scenes exclusively. James Sugg is an example of someone that likes to be on both sides of the footlights and is terrific as both a performer and as a designer/composer. With Mother Courage and her Children he made a non-singer like Kathleen Turner sound like a champ and that is something that only someone as talented as James can do.

Most people in theater have one concentration. How does one become an actor while also being a composer and which came first for you?

I joined a theater company called Pig Iron, that makes work from the ground up, devising nearly everything that we do. We needed music in our shows and everyone kept looking at me. I quickly realized that I am a theater maker, be that composer, sound designer or actor, attempting to make great theatrical moments and events. That’s it.

Can you please talk about your process for scoring a production?

Find inspiration from the play or director or fellow designers, a starting point. Begin to create a palette from existing recordings or demos, often playing with instrumentation and arrangement at this point. Dissect the play for musical moments, nooks and crannies. Figure out how the sound is going to come to the stage. Is it music that will be taught to musicians to be played live, or will this music be recorded in a studio and then reassembled in the theater? Finally, weaving the music and sound through the play allowing the words and story to lead the way, but taking your moment when music tells the story better than anything else. 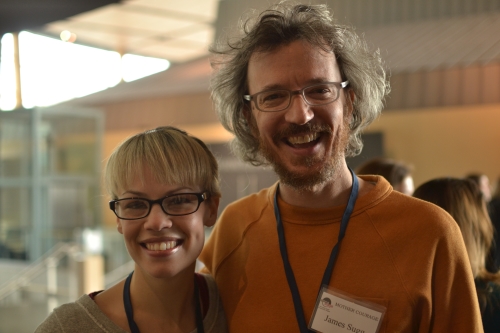 James Sugg and actress Erin Weaver from the first rehearsal for Mother Courage and her Children. Photo courtesy Arena Stage.

How do you best describe the music in Mother Courage and Her Children?

This music is folk music. I’m not sure that it sits in any one place other than that. I hope that it is sown naturally and deeply into the fabric of the production, being produced entirely by the cast and their abilities and impulses.

Can you please pick your favorite production as an actor and as a composer?

My favorite creation as an actor is Pig Iron’s Chekhov Lizardbrain, a bizarre mash up of Three Sisters and brain theory. In it, I play both and autistic botanist, Dmitri, reliving his memories in search for meaning and also his imagined guide or superhero, Chekhov Lizardbrain, an entity deeply in touch with his brain stem. As a composer, my favorite may be Orestes, adapted by Anne Washburn and directed by Aaron Posner, produced at the Folger Theatre. Our Greek chorus was a group of five female vocalists signing an a cappella score that I composed. Such outstanding singers and the music wasn’t bad either.

Do you have any upcoming projects in the area?

Well, quite frankly, no. I am taking a bit of an artistic break, a breather. Maybe you’ll see me on the other side at some point.