Cappies Review: ‘The Pajama Game’ at Connelly School of the Holy Child 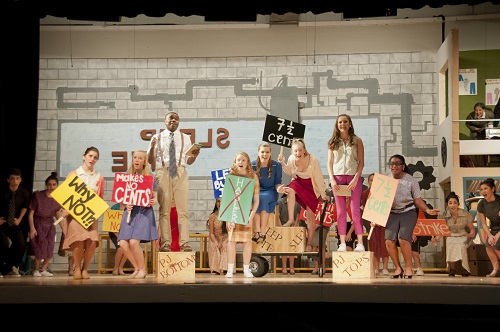 Seven and a half cents doesnt buy a heck of a lot, but a ticket to Connelly School of the Holy Childs production of The Pajama Game is worth every penny for a production plucked out of the 1950s.

The Pajama Game is based on Richard Bissells novel 7½ Cents, and follows the story of garment factory Sleep Tite as the workers demand a raise of seven and a half cents per hour to meet the industry standard. As the union fights the management, the superintendent falls in love with one of the workers. The plot juxtaposes the conflict within the factory and the conflict within their love in this traditional 1950s musical. An all-girls school, Holy Child has selected a production which highlights many aspects of the 1950s important to women even today, notably the role of men and women in and out of the workplace, consumerism, newfound prosperity, unionism, and most importantly, womens strength.

The Pajama Game starred actresses from Holy Child and borrowed actors from local schools. Andrew Myers led the cast as executive Sid Sorokin, love interest of Catherine Babe Williams (India Upton), the assertive factory worker and grievance committee head. The two made a delightful couple, particularly in There Once Was a Man, their playful duet. They brought energy and enthusiasm to a difficult number featuring multiple whoops and hollers. Not to be outdone, Tahana Augustin shone as flirtatious Gladys Hotchkiss. She brought laudable variety to the role, from sensual movement in Steam Heat, to comic delivery throughout, to strong vocals on Hernandos Hideaway (olé!). 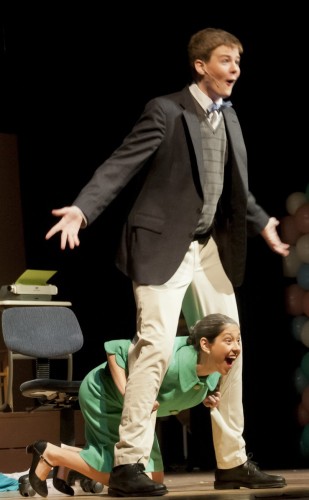 Engaging supporting characters gave Holy Childs production flair and personality. Alex Ekam brought masterful inflection and natural vocals to Prez, the womanizer who assures every lady that Her is kinda doll who drives a fellow bats. Another audience favorite was jokester Vernon Hines, played by John Anderson. Hines and secretary Mabel, played by Becca Rizkalla, presented Ill Never Be Jealous Again with verve, showcasing how much fun a platonic duet can be. Hines again showed off strong comedic chops in a saucy scene at the company office, exposing some hysterical British undergarments to the indignant factory head Mr Hasler (Charlie Gilak).

The characters mannerisms, paired with appropriate and numerous costumes, as well as assorted props such as an elaborate picnic entrance, rolling cart, and light-up Hernandos Hideaway sign, transported the show to the 1950s. Additionally, the set crews use of their space as a factory, including painting and adorning the back wall, was very effective. While the sound crew faced some difficulties with the rectangular, concrete space, all actors reacted well to any microphone mishaps and the show did not suffer much for it. Also, the sound crew was able to show off their skills during the recorder bit in Hey There, earning impressed nods from the audience.

The Pajama Game would not be complete, however, without Holy Childs cohesive ensemble, who were able to capture the vocal style of 1950s musicals with Racing With the Clock and the iconic 7½ Cents. The choreography complemented the music, accentuating upbeat numbers like Once a Year Day. Dance captain Sara Cangarlu (Doris) added flair to the picnic and the union rally with steps that shied away from Fosses original style, nonetheless portraying dancing of the era.

Connelly School of the Holy Childs production of The Pajama Game earned its p(raise), leading the audience on a whimsical romp through the 1950s, all the while spotlighting important issues of the time.