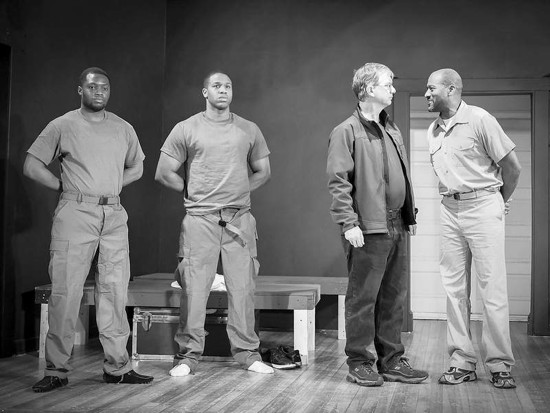 A Soldier’s Play, by Charles Fuller, is being presented by 2nd Star Productions, in their new location at the Charis Center for the Arts, near the antique district in Old Bowie. Jane B. Wingard is the Director, Set Designer and costumes the cast, along with Producer, Cheramie Jackson.

The premise of A Soldier’s Play is about a black officer sent to Fort Neal, Louisiana to investigate the murder of a black sergeant in April 1944. This production runs the gambit from murder-mystery, to the suspense of who-done-it, and the intensity of prejudice. The action takes place on a black box stage with a variety of gray benches used as tables, chairs, and beds.

This is a hard-core, thought-provoking production…

The show opens with the murder of Sergeant Waters, played by Cristopher M. Dinwiddle. Intense in nature, Waters is ruthless as he hoists abuse upon his men, especially the exceptionally talented Private C.J. Memphis played by Ramone Williams. Opposite in character, Dinwiddle plays Waters to the “nth” power of heartlessness, while Williams offers a gentle and riveting voice.

Captain Davenport (Kevin Sockwell) has ample suspects to investigate while some soldiers believe Waters was killed by the Klan. Captain Davenport is also a lawyer, living within the restrictions of a white Army that is fraught with prejudice from both whites and blacks. Sockwell clearly shows Davenport’s determination to get to the truth with his thundering voice and concentrated facial expressions. Corporal Ellis (Fredrick Henderson) is Davenport’s assistant during the investigation. Henderson plays Ellis with honor and a hint of spirit. 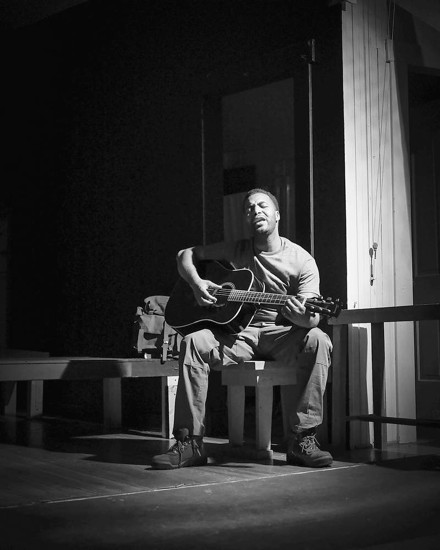 Davenport holds his own against fellow officer, Captain Taylor (Dan Kavanaugh) in a time where a black officer is unprecedented. Taylor waivers back and forth from wanting to shut down the investigation to wanting someone arrested. Kavanaugh plays Captain Taylor with an unbelievable level of intensity that takes his character to the edge of the white vs. black prejudice and yet with an inkling of hope that he’ll end up being one of the good guys.

As each soldier is interviewed, a series of flashbacks are played out by this all black U.S. Army regiment. Each discusses triumphs that Waters manages to tear down with pure disgust. The men, Private Henson played by Daley Gunter, Corporal Cobb played by David E. Johnson, Jr. and  Private Memphis (Williams) are full of cheer as they manage to win a series of baseball games; however, Waters demands they report for duty to paint the officer’s club with a ranting tone in an effort to break their spirit.

Davenport eventually learns of the false charges against C.J. and his suicide while awaiting trial. It is also Waters who busted Sargent Wilkie (Benny Pope) to private rank after ten years of service. Pope plays Wilkie, a big guy with a big smile, who eventually admits to his role in a cover up to get revenge on Waters. Davenport has him arrested.

It is ultimately revealed that Private Smalls (Antoine Bragg) and Private Peterson (Reginald Grier) had guard duty the night Waters was killed. Both are AWOL just after it is announced the platoon will be shipped out to fight on the front lines. Smalls is caught first and admits to Davenport that he was with Peterson the night Waters is shot. Eventually, Davenport pieces together the events of how and who murdered Waters.

Lieutenant Byrd played by Lawrence Griffin and Captain Wilcox played by Ethan Goldberg round out this fine cast of men.

This is a hard-core, thought-provoking production about a prejudice military that plays out among a regiment of men who just want to serve their country. A Soldier’s Play is an honest accounting of our American history meant for mature audiences that will hopefully spawn dialogue.