Theatre Review: ‘Back to Methuselah’ at Washington Stage Guild 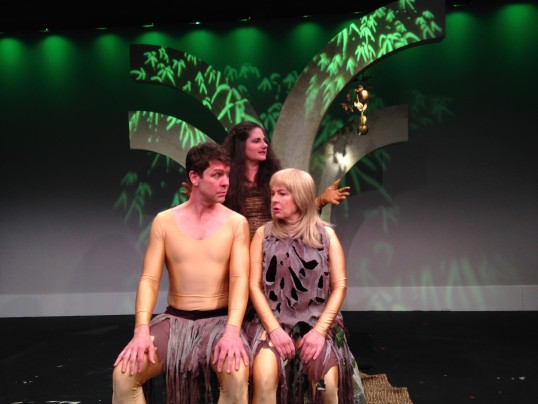 The famous quote: “Some look at things that are, and ask ‘why.’ I dream of things that never were and ask ‘why not?'” is often associated with Robert F. Kennedy, at whose eulogy it was read.

… it’s well worth getting on board

It actually came from George Bernard Shaw. But, as a new production of his Back to Methuselah at the Washington Stage Guild reminds us, it was originally issued with a hiss by the conniving serpent in the Garden of Eden.

The irrepressible Shaw was full of ideas, so much so that he expected his wordy, speech-heavy five-part play to be published and read – not actually produced.

Indeed, it seems there have been less than a handful of full productions since it was originally published in 1921 until the current one at the Undercroft Theater.

The D.C. troupe is taking its time in presenting the whole thing, currently tackling just the first two of its five parts. Even so, it still takes more than two and a half hours.

It’s the first part that involves Adam Eve and the snake. Set in 2004 B.C., the two are so innocent of their surroundings they literally don’t know the meaning of death until they see a fallen fawn. It’s the snake that’s been giving a short course to Eve on some of the downsides of paradise. A few years later, their son Cain comes back to defend his own part in death.

The second act, titled “The Gospel of the Family Barnabas,” is set in “the present day,” but that means post World War I England nearly a century ago, where a couple of political types that would have been familiar to audiences at that time ponder the central idea of the series: That the key to the world’s problems would be to allow people to live 300 years. Humans are so immature their first 70 years or so, no wonder they get the world into such a fix.

Thanks to the serious skills of the guild cast, and the brisk direction of artistic director Bill Largess, this theater of ideas is solid and rollicking, as assured in its wit as it is in its accents. 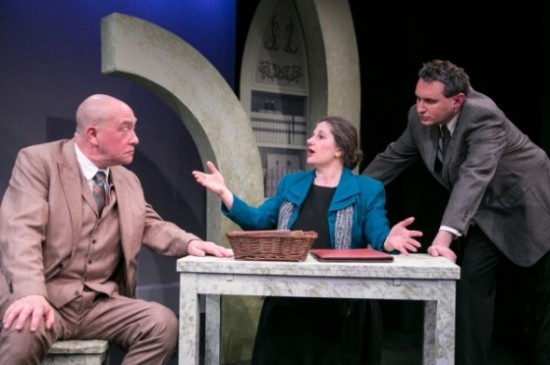 Vincent Clark and Conrad Feininger excel in these roles, as puffed up politicians who try to figure how this fantastical idea would best serve their needs. Laura Giannarelli, playing the woman who helped cook up the idea with her brother played by Michael Avolio, is quite formidable, enough that she’s playing a traditional male role (the segment is originally called “the Brothers Barnabas” ). Nora Palka adds a spark of necessary youth to the cast, and Brit Herring plays a clergyman with surprisingly little interest in human longevity.

The guild does a great job at these drawing room dramas of ideas and one gets a theatrical bellyful of their servings of Shaw’s dialogues.

They are easier to take, perhaps, than the Garden of Eden scenes, since those speeches go on and on and don’t involve as many voices. Besides, the Adam and Eve act has been done so much over the years that that portion seems instantly less original.

And the casting is curious as well. While Giannarelli is fine as the slithering snake, Lynn Steinmetz may simply be too old for a woman who is supposed to still give birth to the rest of humanity. Brit Herring is no spring chicken either, but he could at least help populate a world. It gets stranger in the next segment where Feininger’s Cain is even older than the quite mature Eve. How exactly did that happen?

Perhaps all this can be attributed to central idea of living to 300; by this standard, of course, they are both just babes.

The rest of Back to Methuselah is set in increasingly far into the future, all the way to the year 31,920, “As Far as Thought Can Reach,” in what was considered some of the first science fiction ever put to stage. Accordingly, it’s scheduled to be completed at the Washington Stage Guild pretty far into the future as well – two parts next season and the concluding fifth part in 2016.

Because of their dedication – and the unlikelihood that any other theater company will be so brave to join them in presenting the epic – it’s well worth getting on board now.

The Washington Stage Guild production of Back to Methuselah, Part 1 by George Bernard Shaw, continues through March 16 at the Undercroft Theater in the Mount Vernon Place United Methodist Church, 900 Massachusetts Ave., NW. For tickets call 240-582-0050 or visit here.